As I understand this, The Taming of Mei Lin is a prequel of sorts to Jeannie Lin’s Butterfly Swords.   Mei Lin is an orphaned girl who lives with her uncle and aunt.   The uncle and aunt play little role in the story and while not kind they are not cruel either.   Mei Lin works at her uncle’s village stand selling noodles.   Her uncle has her working during the hottest part of the day and Mei Lin looks with envy at Chang’s tofu stand because he had protection of the shade tree. 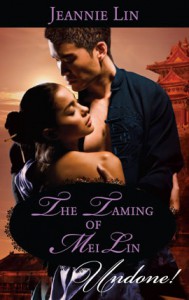 Mei Lin is a pretty girl and came to the attention of the magistrate of a nearby town.   Zhou’s flaw was that he already had two wives and Mei Lin has no desire to be a third.

Uncle and Auntie Yin had been thrilled that someone wanted to take her off their hands, but Zhou already had a wife. Two wives, in fact! She would be little more than a bed warmer and glorified kitchen maid.

Mei Lin declares that she’ll not marry until someone can best her in a  challenge.   She’s beaten all the village louts, the buffoons who have  come to take up the challenge, and the minions sent by Zhou but ultimately she realizes that one day will come when someone stronger  and better at the sword than she will defeat her and that person could  be far worse than Zhou.

One day, a tall, dark stranger turns up and asks her to take up the  challenge.   She does, of course, because what else is there to do but try to win?   Her confidence is shaken when she hears his name.   Shen Leung.   Even in her tiny remote village they have heard of the emperor’s sword.

He bowed, blade pointed downward, very formal. Like this was a sacred ritual instead of a street brawl. She looked down at her swords and for a moment they felt strange in her hands, as if she didn't practice every morning and night with them.

Master always said she wouldn't know her limit until someone pushed her to it.

"Now?" the swordsman asked from afar.

She tossed her hair out of her face. "Now."

I thought  you did a good job of setting it up so neither Mei  Lin  or  her challenger, Shen Leung, lose face in the challenge.Shen Leung didn’t mean to fight a woman but he was intrigued by the stories in the tavern about a girl and her butterfly swords.

Shen Leung  admires  Mei  Lin  greatly and although he didn’t know the full terms of  the challenge when he fought her, he doesn’t see himself as worthy of  marrying one such as Lady Wu, as he calls her.   He brings no property, no coin to her  (not that  Mei  Lin  has any of her own).   Even her proficiency with the swords adds to his feeling of inadequacies as it comes to a suitor. What I didn’t understand, and perhaps the shortness of the story contributed to this, was the motivations of Shen Leung which prohibited from marrying Mei Lin and then ultimately succumbing to that state. We spend more time with Mei Lin and it is easy for us to see why she chose to take particular action but Shen Leung was far more of a mystery.

There are two sex scenes in the story and I felt like they were almost  superfluous. I wanted more fighting!   The sword scenes were wonderful.   But even if I felt that the sex scenes were imbalanced in the story, it gave me a feel for your voice (which I thoroughly enjoyed) and whetted by appetite for the full length novel, Butterfly Swords.   B-