REVIEW: Take Me On by Cherrie Lynn 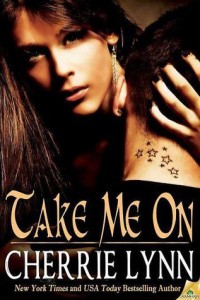 I read and enjoyed the previous book in this series, Leave Me Breathless,  last year so I was happy when this one landed in my inbox.  While the series has a lot of recurring characters and there is regular reference to events from previous books, I think the books work well as stand alone novels too.  I confess I DNF’d the first book – Unleashed.  One day I may go back to it because I have enjoyed other books from you and maybe I was just in a bad mood (although naming genitals is not something I’m fond of and that was one of the reasons I stopped) and I haven’t read Rock Me, the second book. I had no trouble following what was happening so I’d say to potential readers not to worry about it being book four of a series.

Gabriella is the oldest Ross sibling, at thirty-six.  She has been a nurse and is now in medical school  The book begins when she is just about to finish her first year and just about to marry cardiologist Mark Easton.  When he’s a no-show at the wedding, she’s humiliated and heartbroken.  She heads away from Dallas to her hometown to lick her wounds for the summer before she has to return to start her second year.  The Ross family is obviously wealthy and Gabriella is very luck in that her parents pay for most of her school fees and rent on her apartment.   This seemed a bit odd to me for someone who is thirty-six.  She never really has any qualms about accepting it either.

Gabriella decides to get a tattoo of a phoenix rising from the ashes on her back, as a symbol that she won’t be kept down and heads to her brother Brian’s tattoo shop.  Gabby has a reputation within her family for being a hardass so Brian and Ghost both decline the tattooing duties, leaving the job to Ian Rhodes, a newish employee who’s transferred up from Dallas.  Ian is instantly taken with Gabby.  She’s beautiful and they talk a bit when he’s doing the outlining work later that day.  He knows she is way out of his league. She’s going to be a doctor, comes from wealthy family and he feels he’s really got nothing to offer a “woman like her”.   He had a shitty childhood where his stepdad abused his mother and himself and his mother never ever stood up for herself or, worse, for him.  He is a talented tatto artist but doesn’t really have a passion for the job – it’s more something he fell into. He doesn’t have much money and doesn’t see much in the way of future prospects for himself. Gabby is not a snob and never thinks of Ian that way, but Ian is very much weighed down by his own baggage.

When Gabby sees Ian later that day in a bar near the shop, she makes a beeline for him and vamps it up.  He’s definitely interested but a bit worried about doing the boss’s sister.  He doesn’t think Brian would take it well and he needs the job.  Because: reasons, Gabby and Ian do end up spending the night together.  Their chemistry is off the charts and both of them are pretty blown away by how good they are together.  The sex scenes were very well done – both of them do a bit of dirty talking and neither are shy about asking for what they want.  Ian likes to tease and taunt and drive Gabby wild just because he can but he always delivers.

Even though there is a lot of attraction between them, Ian doesn’t pursue it because he’s not good enough and Gabby knows she is going back to Dallas the end of the summer so there’s no point in getting attached.

This next bit might be a bit spoilerish, but I can’t work out how to say more about the story without giving it away.  If readers don’t want to know, look away now.

Despite practising safe sex, Gabby falls pregnant.  This brings Ian and Gabby together again as they try and sort out what they want to do.  I liked that Gabby told Ian first.  She didn’t expect anything from him but she gave him the opportunity to be involved if he wanted to. And pretty quickly, he realises he absolutely wants to.   Ian is very supportive of Gabby’s career and does not wish to stand in the way of her going back to Dallas to medical school and but he wants to be involved in any way she’ll let him.

Gabby and Ian don’t know each other very well and unfortunately, what was on the page didn’t add much to that.  I would have liked to have seen more of Gabby and Ian getting to know one another.  I certainly believed their chemistry but I wanted to see more of them talking to each other about stuff.  Don’t get me wrong, I was pretty happy to read the steamy sex but I wanted more of the non- dirty kind of talking too.   All the ingredients were there for a believable and hot relationship but, to continue the metaphor, they weren’t quite mixed enough for my liking.

Gabby’s parents don’t react well to Ian’s presence in her life and they threaten to withdraw their support of her if he moves in with her.  This is all kinds of not okay, not least of which because they jump to this erroneous conclusion that Ian will be a mooch. They make no attempt to get to know him or to trust in Brian’s judgement that Ian has a worthy character.  I was annoyed by the conflict here because it didn’t fit with what I knew of the Ross parents and partly I was annoyed because Gabby didn’t even try to come up with a different option than being supported by her parents – something which most of us cannot do at her age.

There are a lot of babies in this book.  All the Ross siblings are getting in on the baby action in one way or another and epilogue is a bit on the saccharine side.

The writing style is engaging and easy to read and I found myself devouring the book like a packet of biscuits (I’m trying to cut down on sugar at present so it’s a particular temptation). I most enjoyed the parts where Ian and Gabby were together. Their chemistry sizzled off the page.  But after finishing the story, I did realise that the book was lacking somewhat in “nutritional value”.  There wasn’t enough relationship development – we jumped from sex to baby to let’s give this relationship a go to I love you – HEA pretty fast.

It’s definitely a steamy and entertaining read and, if readers don’t mind a lot of babies (like really, a LOT of babies) in their stories, I think it will hit the spot for many.  I give Take Me On a B-.