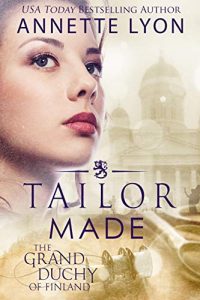 Two people. An impossible task. A traitor in their midst.
Sofi’s mother desperately needs medicine, and Sofi will do anything to get it—including a one-month stay at the Brunberg mansion in Helsinki, the capital. There she’ll spend her days at the Kangas Tailor Shop, knitting silk stockings and other items from sunup to sundown for the biggest wedding of the decade. If she can do it, Sofi will have the ability to get the medicine her mother needs, with money to spare.

But Sofi’s safe world of knitting needles and thread is turned upside down when she finds herself in the middle of political intrigue. Antti, tailor and owner of the shop, Sofi uncover a plot to sabotage the Brunberg son’s wedding and threaten to bring Russia’s fist onto the Grand Duchy, removing the Finns’ self-governance, and possibly lead the countries into war.

As Sofi and Antti work together to save their country, she can’t help falling in love with the unassuming and attractive head tailor, though she knows she can’t have him. Her country and her family need her, and when her job is done, she’ll go home to Porvoo, never to see him again.

As they race to stop the traitor, the battle in her heart intensifies, and she fears that the victor won’t be love.

I don’t remember reviewing any books about Finland before but based on the description in the title — Grand Duchy of Finland Book 1, I hope that you’ll be writing more stories using this setting. The blurb promised that the two main characters would manage to avert a war and I will admit to some skepticism but by the end, I was won over and impressed by the simple but clever plot.

Another aspect of the story I liked is the fact that the hero and heroine, along with most of the characters, are commoners and working class people. Sofi’s family have been farmers for generations while Antti talks about his grandfather owning their tailoring shop. True, as a merchant he is socially above the servants of the Brunberg household but he never forgets the fact that he must speak deferentially and in Swedish to the members of the Count’s family.

In the time period of the story, 1883, Finland is a Grand Duchy controlled by Russia. The Finns have some autonomy and Finnish culture has been burgeoning but the Russian Czar sounds ready to squash them under his thumb. It was fascinating to read about how all of this affected the average Finn which was shown in little details such as Antti’s decision not to try and increase his trade by learning Russian; he already speaks Swedish as most of the nobility uses that language. Sofi has heard people talking about Finnish national identity but only quietly and at times when such talk was unlikely to be overheard.

I did wonder why, when faced with an overwhelming order to outfit the entire Brunberg household (including servants) as well as the bride in such a short amount of time, Antti’s staff wouldn’t be using a treadle sewing machine but the explanation that noble families expected all their clothes to be handmade – and how not doing so could be viewed as an insult enough to not only ruin Antti’s business but also potentially insult the Russian (and relative of the Imperial family) bride and start a political incident – made sense.

Since the story is a long novella, I could understand using instant attraction to get Antti and Sofi past their initial introduction and on the road to falling in love. But they do also have many (tailoring/seamstressing) things in common to deepen their connection. Still with them united from the beginning, there aren’t any personal obstacles for them to overcome. Sofi helps Antti with prioritizing the enormous order facing his staff but with his years of experience, it seemed that he would have already thought of these things.I also noticed a few idioms and words used that I felt might be at least slightly anachronistic.

But even with these niggles, the plot was inventive and I enjoyed reading about a time period new to me and learning more about the issues facing the Finns. B-