Mention of the caper show “Leverage” was a highly effective hook, but when I started reading Sweet Revenge, the comparison worked against the book at first. I kept wanting it to be about the Nemesis team and their interactions, and had to consciously force myself to concentrate on the main romantic leads. Once I did, I liked what I found. 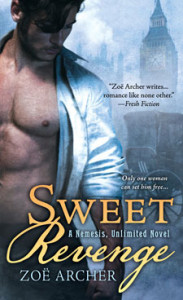 “Diamond” Jack Dalton got his nickname because “he’d been formed by crushing pressure into the hardest thing to walk the streets of London.” Five years of hard labor for trying to murder his employer have made him even bigger, stronger and tougher than before. Many authors would team a man so big and rough with a gentle, sweet woman to “tame” him, but Jack is going to meet his match.

Hearing that the man he still hates more than anything in the world is nearby Dunmoor Prison spurs Jack into escaping. But instead of finding Lord Rockley, he runs straight into a beautiful woman pointing a revolver at his head. Eva Warrick and her associates — “Nemesis” — have successfully baited the trap to get Jack out, so they can use him for their own vendetta against Rockley. (Nemesis seeks “to correct the imbalances in our society,” to get justice or vengeance for the powerless.) And though Jack would still prefer to simply strangle Rockley, he’s induced to work with Nemesis on their terms.

I have to say, Nemesis was kind of a disappointment. Not only don’t they do much in the way of elaborate schemes ala “Leverage,” but none of the other members has a vivid personality. (“Lazarus” is particularly disappointing — with a name like that, shouldn’t he be a super-cool mastermind? It’s not just me, right?) Eva, however, has enough personality for several people. She’s trained to fight, of course, and is far more physically capable than the usual Victorian woman, as Jack discovers:

The strength in her came as an eye-opener, and not a surprise. He ought to know that if a woman looked comfortable holding a revolver, she probably didn’t have fragile doll limbs. Those legs of hers had a hell of a lot of speed, too.

But it’s Eva’s cool determination and intelligence that really set her apart. Jack is not only a fish out of water amongst their group of people with much higher social standing, but he’s psychologically marked by five years in prison; Eva has insight into his needs and a willingness to adapt to them. (She would make a fabulous special education teacher.) She’s also the only one of the group to recognize that Jack has brains as well as brawn — something he doesn’t realize himself.

He seemed to accept the role he’d been given, a role that vastly underestimated his capabilities. No one, it appeared, ever told Jack Dalton that he could be anything more than a brute for hire. But he had a brain. A very good one. And it had lain fallow for far too long.

She saw examples of wasted potential every day… It always stirred her. But never as much as Dalton did.

Attraction grows steadily between the two — not just physical but based on appreciation of their characters:

“We both know Nemesis has got me by the baubles.”

She pursed her lips. “Not forever.”

“When you’ve got a man by his baubles, love, even a minute feels like a lifetime.”

“Having none of my own, I’ll have to take your word for it.”

Goddamn, she was a brazen one. And goddamn if she didn’t intrigue him, this woman who talked in a posh accent about a man’s goolies and led two lives. A woman like her couldn’t be trusted.

He didn’t trust her, not by a mile, but he was fascinated by her.

Eva is also no simpering virgin; her sexual history is never mentioned, but she obviously has one. I don’t know how realistic this is for the time — but then, how realistic is a secret organization bent on righting wrongs? In the context of the book and Eva’s character, it fits perfectly.

There was quite a lot to like about this story. I enjoyed the banter: “Maybe she needs someone a bit more rough around the edges.” “Dalton, if you were any more rough, you’d be serrated.” And the setting felt real, a dark, dirty Victorian England. (I was a bit thrown by Eva using the word “conceptualization,” but the OED places it close enough to the time period.)  These good qualities didn’t entirely compensate for the dullness of the Lord Rockley plot and associated Macgufffins. Although I appreciated the gradually developing romance, the story only caught fire for me towards the end, when we got to see Jack’s tender, passionate side; before then I had no trouble putting the book down. I also felt that the ending shortchanged Eva a bit, in what seemed like an unnecessary way. Still, props for writing her. B-.