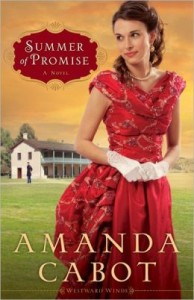 Though she had planned to spend the summer in Vermont, Abigail Harding cannot dismiss her concerns over her older sister. Charlotte’s letters have been uncharacteristically melancholy, and her claims that nothing is wrong ring false, so Abigail heads west to Fort Laramie, Wyoming. When her stagecoach is attacked, Wyoming promises to be anything but boring. Luckily, the heroics of another passenger, Lieutenant Ethan Bowles, save the day.

Abigail plans to marry when she returns to Vermont, just as soon as she attends to her sister. As the summer passes, she finds herself drawn to this rugged land and to a certain soldier determined to persuade her to stay. When summer ends, will she go back East, or will she find her heart’s true home?

Jane featured the first book in this series of three sisters as one of our daily deals. After reading the opening chapter, I decided to give it a go. 1880s Wyoming, soldiers, stagecoach robberies and Fort Laramie sounded like something I would enjoy.

Abigail is a practical, calm woman who doesn’t panic when the stage she’s taking from Cheyenne to Fort Laramie comes under attack by bandits. At least it livens things up for the young woman who up until then had been bored senseless by the unchanging prairie. Ethan had been as bored as Abigail but it was the droning of the Widow sitting with Abigail and speculating on his marital status that had him feigning sleep. Abigail and Ethan are impressed with the way the other handles the attempted robbery but thank goodness there’s no instalust here.

Abigail’s plan to do a quickie visit to check on her now married sister is thwarted by the reality Abigail feared. Something isn’t right with Charlotte and Jeffrey’s marriage and it isn’t just the baby Charlotte is now expecting. It doesn’t hurt that a desperate Jeffrey – who confesses that he dislikes his sister-in-law – begs Ethan to eat his meals with them. Something about Ethan intrigues Abigail but her almost engaged state allows the two of them to become friends long before they begin to develop any deeper feelings for each other.

The pace of the romance is slow and though I generally enjoy a bit of space for two people to learn about each other before professing undying love, even I was getting antsy for some action. Since this is an inspirational I wasn’t surprised that it takes a change of not only heart but faith before this occurs. What did catch me off-guard was the means or should I say the creature who brings it about. Discovery of God’s love for you through the successful medical treatment of a canine is a new one on me. This was really the only part of the book I felt was overtly religious in a slightly preachy way.

The mystery of who from the fort has been helping the bandits choose and stage their robberies is the second part of the book. Several red herrings are presented as possible candidates but I had it narrowed down to two fairly early on. Since there are a few loose strings left once the culprits are busted, I wasn’t surprised to read in your author note that this will be carried over into the next book. I would eventually like to read that book but even if I didn’t, I think there is enough closure here to satisfy.

One thing about this book that I liked is that not everyone is having a crisis of faith and that some of the characters reveal chinks in themselves that make them more believable to me. For instance, Jeffrey’s quick reveal that Abigail annoys him and Abigail’s initial belief that Wyoming is the most boring place on earth. I was also startled about the details of the final years of Fort Laramie but enjoyed learning things I didn’t know when the book started.

There are two things that ended up bothering me about the book. The first is the event that precipitates Abigail getting a dog for Charlotte. As a pet lover, I found it saddening and was glad no further mention was made of it. The second is the reaction of one of the main characters to a tremendous loss. The pain and grief I would have expected didn’t seem to materialize but perhaps that’s because this character had already done the grieving, bit by bit along the course of the book.

Overall, I liked this different view of the final days of Fort Laramie and the soldiers stationed there. The book is one I think both religious and non-religious people can enjoy with the caveat that Church, God, faith and prayers are all mentioned plus Ethan has his moments of spiritual doubt which must be answered and his faith renewed. But there are other issues that are not religious in nature. I look forward to seeing what happens next for the sisters, especially since one is training to be a doctor. B-