REVIEW: Such a Dance by Kate McMurray 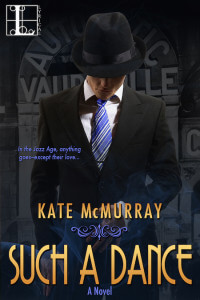 When a vaudeville dancer meets a sexy mobster in a speakeasy for men, the sparks fly, the gin flows, the jazz sizzles—and the heat is on…

Eddie Cotton is a talented song-and-dance man with a sassy sidekick, a crowd-pleasing act, and a promising future on Broadway. What he doesn’t have is someone to love. Being gay in an era of prohibition and police raids, Eddie doesn’t have many opportunities to meet men like himself —until he discovers a hot new jazz club for gentlemen of a certain bent…and sets eyes on the most seductive, and dangerous, man he’s ever seen.

Lane Carillo is a handsome young Sicilian who looks like Valentino—and works for the Mob. He’s never hidden his sexuality from his boss, which is why he was chosen to run a private night club for men. When Lane spots Eddie at the bar, it’s lust at first sight. Soon, the unlikely pair are falling hard and fast—in love. But when their whirlwind romance starts raising eyebrows all across town, Lane and Eddie have to decide if their relationship is doomed…or something special worth fighting for.

This book had all the ingredients I am usually looking for in romance and it was well executed with likeable, interesting characters. But when I finished reading it, I felt that something important was missing for me. I feel a little guilty because I could not figure out why this book failed to wow me (oh there were some niggles but nothing more than that).

But let’s talk about the many good things that I found in this story, and because of those good things I can easily see this book being a five star read for other readers.

First and foremost – the settings. New York in the 1920s is one of my favorite eras to be transported into when it comes to historical romance. I think I blame Tamara Allen’s “Whistling in the Dark” for falling in love with the period and wanting to learn more about what New York was going through in those years. This story takes a place few years later, but I was still eager to start reading and I was not disappointed at all. It was so much fun to spot familiar streets and familiar places, and to learn how they looked back then and what action took place there.

I really liked both main characters. The book introduces Eddie to the readers immediately at the beginning of the story, which starts when he is doing his dancing and singing act on Broadway with his partner Marian.

The steps were easy enough, the routine so committed to memory that Eddie could let a dozen other things swim through his mind without missing a beat.

He tossed his cane in the air and let it twirl. Light bounced off the polished silver shaft of it as the audience murmured appreciatively. Eddie caught it deftly, bowed a little, and moved his feet to the left, right, right, left, left, hop. He grinned at Marian, who stretched her arms above her head with grace, betraying her ballet training. Then she shuffled over to him, evidence of her years spent on the vaudeville circuit. She sang her lines in her trademark style, which sounded a bit like goose honking, and the audience roared with laughter. She smiled and winked at him, and he grinned back and sang the end of the song.”

Eddie loves his work; dancing is his passion and his life, and it was the reason why he left home when he was fourteen (his religious Jewish family won’t accept that he wanted to go in the theater).  Soon, Elijah Cohen became Broadway Dancer Eddie Cotton.

When their act was over, Eddie wanted to have sex, and to find somebody to have sex with he went to Bryant Park and found his old friend/acquaintance Julian. Julian is a prostitute, and Eddie has been sleeping with him from time to time. It is clear however, that this is the last time Julian will go home with him because the cops show up in Bryant Park, and Julian will need to move to another place. Eddie promises to find him, but he realizes that the prospect of not seeing Julian again does not feel all that dire.

All of this action happens in the first chapter of the story, so I am not revealing important spoilers. Chapter two introduces the second member of our main couple, the likeable gangster Lane Carillo. I thought his first line was very catchy, so much that I can see it as the opening line of the novel.

“In 1922, three important things had happened to Lane Carillo: he got engaged, he broke his engagement, and he ran off to New York with his bride’s brother”.

I won’t tell you what happened to Lane’s first love, because even though his fate is mentioned as early as chapter two, I think it influenced Lane a lot and does constitute a spoiler. It is easy to figure out, though, that Lane did not have a happily ever after with him, and that he was supposed to eventually meet Eddie.

I want to mention that when Lane needed to find work and asked his cousin for help, he ended up in the mafia.  With very few exceptions, I am not fond of gangsters in my romances, but I somehow ended up really liking Lane’s characterization.  I don’t want to think about whether he is drawn into that life in a realistic way or not, meaning that if he is not particularly interested in killing, that is just fine by me, but at the same time I find him believable as a character. Lane may not have much taste for killing, but he certainly did not hesitate to kill to protect not just himself, but his business and his investments.  He does what he does because he wants to make money and he is a good businessman, and being a mafia soldier definitely comes with a pricee he is willing to pay. Until he meets Eddie. I also want to mention that they meet in the club which Lane’s boss wanted him to take on and manage, which is a nightclub for queer men.

I also have to say that I had an eye-rolling moment here – I get that the author needed to get Lane in charge of this club so he and Eddie could meet and start their romance, but Lane’s boss being tolerant of gay men just made me shake my head.  I thought it was hilarious, to be honest. Is it because he is not Italian? Because when the Italian boss takes over, SPOILER

(no more tolerance of Lane’s preference for men)
, things sure change.

Here, listen to his pep talk to Lane.

“Epstein tapped the table to get his attention. “I’m surprised you’re this hesitant. I thought this project would be right up your alley. I know you go to places like the Hotel Astor Bar. Mook told me he saw you there with a sailor. I know you’re a fag. Do I care? Not a whit. I don’t get it, but I believe in personal liberty, let’s say. Just as I should be able to make a dollar in the way I choose, so too should you be able to choose how you find your pleasure. Just like any man should be able to choose how he wishes to spend his time.”

“It’s not that I disagree…”

And of course Lane takes this job and ends up enjoying being in charge of the club very much, even though he knows that eventually he might get raided by cops who decide he is not paying them enough. But why not do something enjoyable and make it profitable while it lasts?

Eddie visits the club, they meet, and the romance begins. I thought it was really nicely done. It starts with fast attraction, but I thought the author managed to make the falling in love part move slowly, and a couple months pass before they say the words of love.

I thought the conflicts between the men were very believable and made complete sense. The issues arose because of who these two men were, because of the pasts which had influenced them, and also because of their present lives, because of the jobs they had and loved to do.  Lane may have begun to feel that he had enough of mafia, but as I said before he really liked the business side of things and being in charge. Eddie could not see his life without dancing and I thought it was very interesting to see how both guys grew and changed, and how their goals in life partially changed because they met each other, but also in a sense remained the same.

There is some angst in the story, but I thought it was handled with a delicate touch and felt believable to me.

I believed in their happy ending too.