I have a feeling that this book is going to get some bad grades because the heroine does very bad things and is hard and edgy and the redemption story is hers, not the male protagonist.  But it is because of the heroine that I enjoyed this book.   Natalya Trubachev is a CIA agent. She’s been deep undercover trying to run down all the different factions of a sex trafficking trade. At the beginning of the book, she is the procuress for one of the main players in Russia. 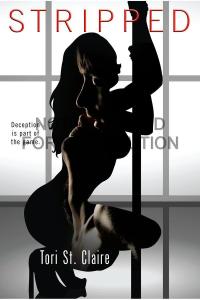 Her actions are ameliorated a little by the fact that she is enabling the kidnapping and sale of beautiful strippers, but this is a chick who has been doing bad things in the name of patriotism for three years. She’s also been sleeping with the major mafia boss who thinks he is in love with her. She is sent to Las Vegas to procure a few more girls because their U.S. contact is not doing a very good job.  Let me repeat, Natalya isn’t saving these girls. She is actually sending these kidnapped women into the sex trade.  As the book opens, Natalya is on the verge of burn out:

Natalya shivered with her. This part was the worst. Three years of soothing the women should have made her immune. At one time, she had been disconnected from them. But now, each pale face, each quivering lip, curled her stomach and left her questioning things she didn’t dare consider. Things like her purpose. The state of her soul. Like why she’d ever become a Black Opal, an elite, deadly, and highly undocumented CIA operative.

When she is sent to the U.S., the person she is to recruit ends up being her fraternal twin sister.  The major flaw in this story is the number of coincidences like this one.  The sibling connection was INCREDIBLE in this story and by that I mean, totally not believable. I had to swallow this eye rolling contrivance in order to move on and enjoy the story.

Romance is replete with redemption stories about bad bad men.  I’ve seen readers complain about the wussy girl spies but this is a woman who is fucking, lying, killing, for the CIA.  It might be an impediment that some readers can’t get past.

In the Vegas club, Fantasia, Lieutenant Brandon Moretti is working undercover to catch a serial killer targeting the blonde dancers in Vegas. Of course, it isn’t a serial killer, exactly.  Moretti and his team of Vice cops are driven, in part, by the death of a female member of their team to this serial killer.

It is at Fantasia where much of this story takes place. Where Natalya grapples with her conscience and weighs the cost of her actions against the ability to live with herself.  Where Brandon struggles with his increasing attraction to Natalya, the new stripper,  his concern for her safety, and his belief that she is lying to him about something.

Natalya is not alone. Her bodyguard, Sergei, is actually another undercover agent for the CIA and has been working, in tandem with Natalya to bring down the Russian mob.  He’s only had to kill people unlike Natalya who has had to have sex with an evil man, make him fall in love with, all the while sending strippers into captivity.  Sergei and Natalya try to smoke out the cops on the take, the Russian mob connection, and destroy the Bratva once and for all.  Natalya is uncertain whether Brandon is her Russian contact or whether it is someone else.

Their attraction to each other is immediate but it worked in this book, as if the pheromone setting was on high at all times.  You couldn’t be in Fantasia and not be affected by the lust.

The dancing/stripping scenes were really well done, described as a real skill and not just for titillation.  The russian mobster really does love Natalya and his love for her provides an added dimension to the story.  Often I dislike reading scenes from the villains point of view because they seem so gratuitous. Not so in this case.

As a vision of Natalya’s green eyes leapt to life in his mind, Dmitri couldn’t help but smile. He ran a hand down the curtains, fabric she’d chosen when he’d invited her to move in. Then, he had never imagined he could come to care so much for a woman who’d once been no more than a hired gun. But her eyes, like the heavy silk between his fingers, made him think of summer, of happiness. Of life. Not the death that surrounded him.

The dark tone, the sexy story, the undercover Vice cops huge capacity to forgive the heroine for constantly lying to him (he knows she is lying to him, just doesn’t know what it is about) all worked for me.  I liked reading about a hard edged female agent who was doing dirty things because that’s what a real CIA agent would do, right? I acknowledge that this book is not for everyone and it is flawed but it’s different than I’ve read before.  B-