Sarah Wendell told me about your book when it was chosen for the Smart Bitches Sizzlin’ Book Club. I admit some trepidation because I am not a huge fan of YA and the YA I do read is ordinarily straight contemporary. Storm is book 1 in the Elemental series. I felt like the series was reminiscent of the world building in Avatar, the Last Air Bender. There are individuals who are born on points of a pentagram and each point represents an Element such as Air, Water, Earth or Fire. The fifth element is a spiritual one who can control all four elements. 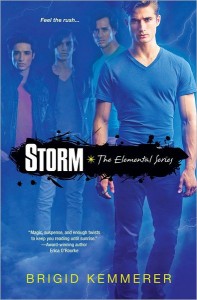 Each one of the Merrick boys is an Elemental. Elementals gone bad are responsible for all the world’s disasters (much like the Fire Lord in Avatar) and the fifth element, or spirit element, is often sent to kill the Elementals (like the Airbender). The Merricks have a background fraught with secrets and tragedy. Much of the story is about the difficult family interactions, between the brothers and between Becca.

The romance is very low key. You are reading this for the character drama more than anything and there is a lot of drama. The Merrick family is stressed to the limits by the loss of the parental units, the eldest’s attempts to keep order and the younger brothers full of anger and desire for retribution, straining at what they perceive to be their older brother’s stupid rules. These are rules that are more profound than curfew at 11. They include not showing their powers, not attacking the people along the lines of the pentagon who have power but are afraid of the Elementals, and definitely not gaining revenge for their parents’ death.

Becca Chandler is drawn into the Merricks’ circle unwittingly when she sees the youngest Merrick, Christopher, being beaten by several boys in the parking lot. She wants to run away but can’t and when Chris uses water from her water bottle as a weapon, she realizes that there is something more to Chris Merrick than his sullen attitude in the classroom.

Becca was victimized by an ex boyfriend who spread a rumor that she slept with several boys on the soccer team. The truth is more complicated and heartbreaking than a reader might initially think. But the rumors dog Becca at school and her circle of friends shrinks to one. The Merricks, save Chris, don’t welcome her with open arms. One of them even makes suggestive remarks about her based on the rumors.

One of the best things about the book was its authenticity. The Merrick boys were imperfect, full of anger and rebellion which suited their parentless state. Their eldest brother was exhausted from the effort to keep the boys together and the younger ones were confused and acted out. Becca has only one parent, a loving but often absent mother.  Her father disappeared years ago but tries to reconnect in the book.  Becca is desperately in need of someone on her side.  The adults in this story are largely absent or ineffective.

The story introduces a love triangle when Hunter, a new kid, comes to town and provides a shoulder and seemingly uncomplicated attention. Hunter is the good guy with secret motivations and Chris is the angry guy with secret motivations. Hmm. The love triangle is resolved before the end, although, for Becca, she probably needed more time to process all the feelings she had for both characters. The love triangle did not bother me because the focus wasn’t really on the romance. How could it be when both love interests are alternatively lying to her, manipulating her, or trying to woo her.

The story moves by quickly and I was easily engaged by this band of teenagers who grappled with the mundane question of what to wear to prom one moment and whether they had to kill someone the next.  At the price of $2.99, it was a good read.