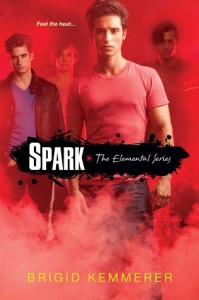 I was excited that I found Spark at NetGalley the day after I finished Storm, the first your Elemental Series. The four Merrick brothers are Elementals, individuals born on the point of a Pentagon which gives them power over one of the four elements.  Elementals are often responsible for wars and tragedies and so Guides are sent to kill them.  The Merricks are not yet fully in control of their powers and spikes of emotion affect that control.

Possibly the least in control of his emotions and powers is Gabriel, the jock, whose first emotional range seems to start at irritated and end with outraged.    Nothing seems to be going right for Gabriel.  He’s tired of being the dumb twin.  Nick, his twin, starts to date a girl and hang out with their younger brother more.  Worse, Gabe’s ability to call up fire seems damaged.  When caught in a bad situation, Gabriel’s first response is to be aggressive.  While it makes Gabe a jerk, it also makes him sympathetic because you can see him straining to be better but he just doesn’t know how to go about do it. He can’t get his better angels out in front of the angry ones and the spiral of bad behavior chasing after negative feelings keeps circling.  His desolation emotes from every slur and insult he casts at others.

This is a great series because as I mentioned in the review Storm, all the characters have an authentic feel to them.

Layne Forrest is a rich kid who is taking advanced classes.  She’s socially awkward, has no style, and unfortunate tendency to get caught staring, both at girls and guys.  Her only friend is Kara who is really only interested in Layne because Layne’s house is full of expensive stuff that Layne allows Kara to use.  Layne’s brother is deaf and the target of school bullies. Her parents are emotionally absent. Layne isn’t turned on or excited by Gabriel’s tendency to hit first, ask questions later.  Why Layne reaches out to Gabriel is the one thing I didn’t totally understand.  I couldn’t get a handle on her motivations.  Was it simply because he was hot? Because he had been nice to her brother once?  Maybe it was because like called to like, her loneliness reaching out to his.

Overall, though, I thought it was another strong entry in the series and I can’t wait for the rest.  Bring on more Elementals please.  B

→ Jane
Previous article: REVIEW: His Very Own Girl by Carrie Lofty
Next Post: Daily Deals: It Had to Be You by Susan Elizabeth Phillips, 2 historicals, and a South African mystery