REVIEW: Snowbound With a Stranger by Rebecca Rogers Maher

I loved the idea of your novella, Snowbound With a Stranger: two strangers stranded by a snowstorm share a passionate weekend. The last time I was stranded by a snowstorm, I was stuck in my house with four little kids, no heat, no running water (septic system), and a husband who spent all his time outside building the kids what I considered a deadly luge run. (My children, now ten years older, still speak of the majesty of that sled ride.) It was a decidedly not romantic weekend. I thought reading about a snowy weekend that was steamy hot–mine was miserably cold–would be fun.

Your novella, thought, was not what I was expected. I thought, given the brevity of the prose—just 78 pages—and the tag line,

Dannie Marino is hiking with colleagues when a sudden blizzard separates her from her group. She’s rescued by Lee, a dangerously sexy stranger who leads her to a remote cabin to weather the storm.

the book would be a light, fun romp. It is not and that turned out to be a treat.

Dannie is, at 38, divorced and utterly burnt out from her job as a hospital nurse. She’s been talked into taking a Saturday hike up a nearby mountain—she lives in Brooklyn—by Dr. Stevens, the head of her department, who leads hikes like these once a month. Dannie hikes to escape.

In the mountains it usually took a full hour for her head to clear. Two hours before she could even begin to appreciate the scenery around her. A full day, sometimes, before the constant echo of hospital beeping would flush itself out of her system. For these first few minutes all she could do was walk and breathe. And let the cacophonous thoughts in her head swirl out one by one. 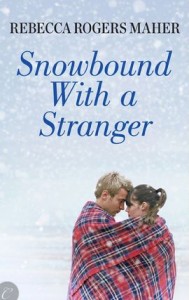 She doesn’t like to talk to the other hikers—not even Lee, the good looking guy she notices who is hiking with the group for the first time–and, when she leaves the trail to use the bathroom just as a storm begins to blow in, she finds herself lost and alone, unable to find the trail in the snow. Several hours later, the storm has turned into a blizzard, and Dannie is panicked.  Frozen and terrified, she’s overjoyed when the cute—make that gorgeous—guy she noticed earlier appears. Lee has been trying to find her, and, by the time he does, the roads are impassable. After conferring with Dr. Stevens via walkie-talkie, Lee and Dannie decide the only option they have is to hike to Dr. Steven’s cabin and wait out the storm.

Once they get to the cabin, they make a fire—the power is out—and take stock of their situation. Lee tells Dannie the likelihood is they could be snowed in for several days. There’s water (c0ld, of course), food, firewood and Scrabble. They settle in and, as they do, both realize they are exceedingly attracted to the other. Lee thinks,

from the first moment he’d laid eyes on her, he’d wanted to put his hands on her. With the kind of urgency a starving man feels.

For her part, Dannie feels her skin tingle every time he’s near her; the idea of being trapped with Lee for a few days is turning her on.

She was thirty-eight years old. She had never in her life had a one-night stand with anybody. She was divorced. She hated the job she was supposed to love. She wanted to sleep with Lee.

Still though, there is awkwardness to the situation and Dannie suggests, to pass the time, they play Scrabble. Their game immediately turns into to lexical foreplay. Lee goes first and plays SCENT, then asks Dannie why she smells deliciously like raspberries. Dannie plays CHEST and tells Lee she noticed how broad his was when she first saw him in the parking lot. Lee retaliates with EYES, saying, as he lays his letters down, ““They’re beautiful, Dannie.” After a few more tiles and confessions, it’s game over.

She closed her eyes.

Beneath his hand she began to tremble.

She drew a ragged breath and nodded.

He slid his hand into her hair and pulled her nearer. Her eyes met his. When his lips brushed against hers, it was as though a snake unfurled itself inside her chest. She opened her mouth.

Ten hours earlier, she couldn’t even allow herself to look at him. Now, his tongue trailed a hot path along her lower lip. He tightened his fingers in the tangle of her hair.

She’d been right to be afraid. He was barely touching her and already she was on fire.

What follows is a lovely exploration of what happens when two lonely people spend the weekend talking and making love with nothing and no one to distract them. Lee, an oncology social worker, turns out to be a widower still grieving the loss of his wife who died in 2001. Dannie wonders why she no longer loves her job and why she let her marriage slip away with such ease. They each are wary of opening themselves up to the other emotionally and initially focus on having the best sex of their lives instead.

“I’ve read romance novels like this.” Her voice was shaky. “Two strangers trapped together somewhere, getting it on. Every damn time the guy is an alpha, strong-arming the heroine. And she pretends not to like it, but she really does.”

Lee covered her hand with his. “Am I strong-arming you?”

Dannie shook her head. “I shouldn’t have.”

“What’s that supposed to mean?”

Dannie smiled, clearly glad to have him on the defensive. “It means you’re a nice guy. You care about people.”

Worse things could be said about a man. “That’s true.”

“Seriously?” He made a stupid hangdog face,

As the snow continues to fall, the two slowly become emotionally involved and that too is well-done.  Lee and Dannie, both of whom are professional caretakers, use their skills to help each heal. When, after three days together, they are able to hike back down the mountain, both are believably changed for the better. They are again, as Dannie thinks, “A part of the feeling world.”

I liked this little book.  Lee and Dannie are well-drawn out characters and their interactions, though compressed in time, resonate with depth. The sex scenes are nicely done and the love Dannie and Lee make is integral to their emotional journey. My only complaint is that, overall, the writing could be a bit crisper. I give Snowbound With a Stranger a B-.