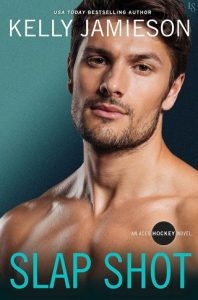 As a fan of several other college-set hockey NA series I’m not sure why I’ve never tried yours. Though Slap Shot isn’t college-set, I believe the Aces series is related to the Bayard College series, at least tangentially.

Max Hall and Kendra Armstrong meet at a wedding; he’s a teammate of the groom on the Chicago Aces pro hockey team, and she’s a cousin of the bride. They are attracted to each other immediately and end up spending the night together (though technically no sex happens until the next day; a tipsy Max passes out before anything can happen that night). Neither wants a relationship – for one thing, he’s in Chicago and she’s in New York; for another, both are focused on their careers. But they somehow keep meeting up and having hot sex and eventually they agree to a long-distance friends-with-benefits relationship.

The story is told from Max’s POV, which is unusual enough that I had a little trouble getting used to it. I’m much more used to alternating h/h POVs at this point. Max is coming off a year-plus out of hockey, for a very traumatic reason: his wife fell ill and died of a rare form of cancer. Max is just now coming back to life (before Kendra, he hadn’t had sex with another woman since before his marriage), and his main goal is to make the Aces for the upcoming season. He’s keenly aware that he’s not young anymore (well, young in hockey years; he’s 29) and he’s doing everything he can to get in shape (his diet and exercise regime is described in more detail than I really needed).

We only see Kendra from Max’s POV: what she tells Max or what he hears about her from his teammate, who is also her cousin (the bride from the opening being the sister of this teammate). She has a psychology degree but no longer practices; instead she owns a sex-toy company with a friend. She stopped working with patients because she became too frustrated by her inability to fix peoples’ problems through psychology, so she’s focused on helping women have better sex lives (and she takes it seriously, which I liked; her job is not played for laughs for the most part or treated lasciviously). Kendra has a terrible relationship with her narcissistic mother and has had made poor choices in previous romantic relationships, going for guys she wanted to “fix” (that psychology degree rearing its head).

I really liked Kendra – I liked her healthy, modern attitude towards sex and her ownership of her sexuality. I would’ve liked to get her POV because I think she was actually a more complex and interesting character than Max was. Max was chiefly focused on 1) making the team and 2) feeling that he can never love again because his wife died.

I won’t say that I’ve *never* read a romance novel written solely from the male POV; I’m sure there have been a few in the thousands of romances I’ve read over the past 25 years. But I’d say they have been very rare, and none spring to mind immediately. (To be totally technically accurate, Slap Shot does include the heroine’s POV briefly in the epilogue.) Max was likable, but again, not necessarily the most interesting character to inhabit the mind of for the whole book. He veered between being very “stereotypical guy” (there was way more musing about the state of his dick and balls than I wanted or needed to read) and being oddly observant of decor and the other characters’ fashion choices. Usually those sorts of observations are just background detail in a romance, but again, when the romance is solely told from the male POV, and the male doesn’t seem like he’d use the word “bodice” or notice (in detail) what his lady friend’s business partner is wearing, they feel a little jarring.

Max also came off as a bit unsophisticated of a thinker sometimes. He seems to really believe that there’s a possibility his dead wife is up in heaven crying because he’s sleeping with another woman. That struck me as…weird, and almost childlike. I mean, I know he feels guilty, he’s projecting, etc. – but you’re a grown man and your view of heaven seems to be your loved one sitting around on a cloud pretty much how they were in life, with human thoughts and jealousies, along with with the harp and halo?

Slap Shot is a very simple, straightforward romance. There’s little conflict – you know there will be a showdown over Max’s putative inability to love again at some point, and there is, but of course the outcome is never in doubt. Other than that, he’s trying to make the team, and he finds himself in the position of warily introducing Kendra to the people in his life (his parents, his wife’s family) while still trying on some level to keep their relationship in its little compartment.

I did like that Max really seemed to *like* Kendra, and while there felt like at times an excessive focus on sex and sex scenes (yes, I’ve become one of  those readers), their friendship clearly developed along with their romance. Since it was a long-distance relationship, the two would Skype or text about their days and including those little details made the romance feel more real (those sorts of details aren’t something you see developed often in romances, which is why I appreciated it).

I finished Slap Shot a few weeks ago, and I notice I gave it a C+ in my log. In retrospect, that seems rather low. I do think the book suffered from only having Max’s POV, and story lacked a bit in depth and conflict. But I feel it’s worthy of a solid B-.