Creatures of the sea are my paranormal weakness.  There are admittedly a lot of paranormal creatures that I’d sell out for, but I find the most romantic creature to be the mermaid/mermaid-like creature.   Siren is a slower-paced book that balances a paranormal mystery with a strong romance that may make those tired of the usual YA fare take interest. 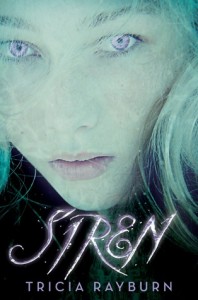 Vanessa and her family have taken a trip to Winter Harbor, Maine, every summer.  Vanessa always hangs out with her sister Justine, who jumps between boyfriends and attention grabbing stunts every day.  Together, they are good friends with a family in the summer house next to theirs.  The Carmichaels have known the Sands family for a long time, and the Carmichael boys have been inseparable from Justine and Vanessa since the first day they met.

Growing older has made relations with the Carmichaels change.  Justine, whom Vanessa always sees as beautiful and attentive, is in an on-again, off-again relationship with the younger Carmichael brother, Caleb.   Vanessa has no idea what her older, Dartmouth-bound sister sees in the younger guy who is still obsessed with video games and acts immaturely.  It would make more sense to be interested in Simon.  The quiet college student who knows way too much about meteorology would make a much better boyfriend for someone on the road to responsibility like Justine.

The day the Sands family gets to Winter Harbor and sees the Carmichael boys for the first time again, they start a new tradition by jumping off of Chione Cliffs.  Vanessa still fears the water and the height, but Justine and Caleb are fearless and continue jump off of the cliffs.  They don’t stop until Vanessa gets a large cut down her leg amidst swirling waves and stormy skies.  With the weather so bad, the teens have to call it quits.

The next day, Justine is no longer there.  She soon washes up on the shore of the local beach.  Dead.  Vanessa and her parents are shocked and don’t know how to react.  Especially Vanessa.  It looks possible that Justine could have jumped into the water herself.  But why would she do that?

Vanessa soon begins to uncover shocking truths.  Justine never applied to Dartmouth.   Vanessa goes back to Winter Harbor alone to try and figure things out and discovers that Caleb is missing as well.  Her time alone in Winter Harbor allows her to make friends with a local waitress named Paige, whose sister seems to snatch up guys at every moment.  She also finds blossoming feelings for Simon.  Together, she and Simon try to figure out where Caleb went, and why the weather around Winter Harbor is churning up the tides and dead bodies almost every day.

Vanessa is  a quality heroine, and should stand up to the test of a lot of paranormal-fatigued readers.  Where Vanessa really shines is her ability to make decisions for herself.  Her self-esteem is very low, but she understands the need to find herself and make peace with what happened to her sister.  She shows a lot of initiative by trying to get away from her family for a while and having some peace.   She finds herself picking up a job, friends, and looking further into her relationship with Simon.  I found her to be a very practical heroine with this kind of stuff.  Her focus wasn’t on finding the boy or personal dramas, but the more pressing matter of finding Caleb and discovering the secrets of Winter Harbor.

This decision making process thankfully also heads into her romance.  Vanessa certainly acknowledges her attraction to Simon, but she does it slowly and sensibly.  Some PNR heroines can feel like dogs in heat; jumping on their heroes as fast as possible and never letting go.  Vanessa is more analytical and steadily notices how she and Simon don’t interact the same because of their new attraction.

Simon himself is a hero different from the rest of the YA PNR flock.  While Vanessa is very attracted to him, he isn’t an alpha personality.  He’s more of a nerd character who loves to discuss weather patterns and gets roped into Vanessa’s adventures more than anything.  I liked his slow romance with Vanessa, but Simon didn’t leave a major impression on me.  The relationship in this series opener is a lot of set-up, and it’s only implied that the next book, Undercurrents, will possibly test the relationship.  With all of the events going on prior to the ending of Siren, I felt it unbelievable that the couple didn’t have much a problem getting together.

Vanessa’s relationship with her parents was surprisingly good, too.  Between her own insecurities about them (disconnect with her mom being the main issue) and the grief from Justine’s death, there was a lot of emotional material covered early on that I was surprised about.  They don’t make much of an appearance until the last bit of the book, but I was happy to see Vanessa’s relationship with her mother progressing into something less hostile and more open minded.  Her parents and friends also became instrumental in showing her how her relationship with Justine was skewed.  It made use of the unreliable narrator with Vanessa, though only to a small extent.

Siren dislodges itself from being a top-notch read based on the way the story is presented.  The prose itself is good and very evocative of the story’s overall mood.  A lot of description is brought into the setting and the weather especially, which ties in with Simon’s obsession and the story’s focus on water.

“Your sister.”  He shook his head and looked at me.

“I know.”  We both did.  It wasn’t his fault.  Or mine, or anyone else’s.  If Justine wanted to run naked through circles of fire, she would.  You could wait nearby with a bathrobe and fire extinguisher, but that was the best you were going to do.

We started after them.  The longer we ran, the lighter the rain felt.  The thunder grew softer, and the seconds between rumbles longer.  Even the wind died down from the powerful gusts to a normal summer breeze.  By the time we reached Simon’s old green Subaru parked to the side of the dirt road, the clouds had cleared enough to reveal patches of blue sky.

The descriptiveness of the prose is a plus, but the effect it has on story flow is not good.  Siren moves at a pace that would best be described as self indulgent.  As a reader, I simply had to look at the cover, title, and back blurb to figure out the general idea of the story.  The blatant marketing implies that this fact is discovered early on in the novel.  In reality, it takes a long time for the main character to even think of the possibility, yet alone admit that it exists.

There was also a problem with predictability.  A reader wants to be surprised, and Siren‘s slow pacing makes it much to easy for the reader to determine a majority of the plot twists before they occur.  Some interesting French lore was involved in the world of Siren, but it felt pointless with how far the book progressed prior to when it was introduced.

I more liked Siren than didn’t.  I think it’s stronger than a lot of YA PNR for its characters and concept.  Vanessa and Simon aren’t the usual heroes, and Vanessa’s relationships are developed well and feel genuine.  The writing evoked a good setting, but was bogged down by its own slowness in both plotting and world building.  Sufficent material for a sequel – and an ending that suggests it – could spell an interesting continuation for the characters and world of Siren.  B-