An acquaintance recommended you as an author to read so that’s why I decided to take a look at this one. Although I don’t think I was a fan of this one, I think I may go find some of your other books. 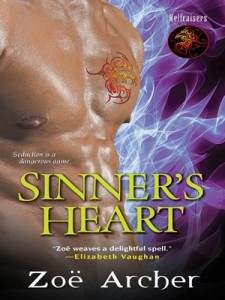 The third book of the Hellraiser series features Abraham (Bram) Stirling as one of five gentleman dealmakers with the devil. In exchange for their souls and service, this group of friends was granted supernatural powers and gifts by the Dark One, in kind of an alternate supernatural historical. Now only two are left and London is closed to being conquered by an army of Hell. I liked the unique premise of this paranormal because it reminds me of old folktales of people making deals with the devil.

On the eve of this, Bram finds himself haunted by Livia, the ghost of a Roman priestess. Livia is the one who originally freed and made a deal with the Dark One in a power hungry pursuit of magic and since then, has tried to do her best to fight him. I usually like the enemies-to-lovers trope, and but I think this one was one of the first times that I had no idea how these enemies would become lovers. The distaste for one another just seemed to vibrate on the page. Of course, that also meant that when the two did come together, there was a bit of intensity, which was unexpected, considering that one of the protagonists is a ghost without any ability to interact physically in the mortal world. Kudos for some excellent sex scenes without physical intercourse.

The fast moving plot definitely contributed to heightening the romantic tension and development of trust between the two. Sometimes paranormal romances don’t feel fully-fledged; romance feels like a subplot to the supernatural or vice versa. This was not the case here. The romance was not only inseparable from the plot but was an integral part of it.

This was a well-crafted story. However, looking back, I just didn’t enjoy the story as much as I think should have. My main problem was that I didn’t find either the hero or the heroine to be protagonists that I could empathize with. Sure Bram and Livia are no longer bad guys working for the Dark One and are both now willing to risk their lives for the greater good, but I think part of me feels like they didn’t suffer enough for the evil and harm they caused in the past. It feels just a bit unjust for both of them to get a happy ending together. In part, this is because the selfishness, hopelessness, and greed of these two are just so well depicted. In other books featuring protagonists-to-be-redeemed, you often get a sense that evil and bad things that they’ve done are just a thin veneer on someone truly good at heart. Here, I felt that their innate goodness only just barely tipped the balance against evil. I’m not saying that they didn’t suffer or regret their past mistakes, because Bram and Livia did. I just think that what they’ve done in the past requires a little more repentance. Usually I like reading about dark heroes and redemption, but I don’t know why this didn’t really come together for me. Maybe it’s because it’s about two formerly evil people rather than just one? I’m not really sure.

I think this is one of those cases where I feel that it’s a good, well-written book, but one that is just not for me. I would definitely recommend it but if you like your heroes a little less dark, it’s probably best to stay away from this one. Still the strength of the writing and the well-crafted nature of the plot and romance make me interested in checking out some of your other work. B-