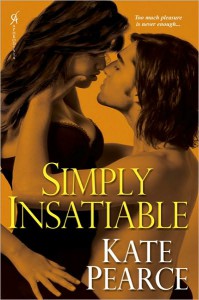 I read and reviewed your book Simply Wicked last year and gave it a C+. Since I mentioned in that review that I was interested in reading the series further (in spite of the mediocre grade I gave the book), you were kind enough to offer me Simply Insatiable. I think having read  Simply Wicked prepared me for the tone of this story, and thus some of the aspects that troubled me in that book did not concern me in this one. Yet I still find myself having philosophical/political issues with some aspects of the story, much as I did with Simply Wicked. This lead to a somewhat divided reading experience for me; I’m going to try to tackle how the book worked for me on an entertainment level separately from how I feel about the depiction of sexuality in it.

The story opens in London in 1819 with Lord Minshom, the villain of Simply Wicked (who I incorrectly identified as Lord Minshon in my previous review – sorry!) brooding in his study over the hero of that book, with whom he had been engaged in a BDSM relationship (Minshom being dominant). Minshom feels that he has been made a fool of, and that is unacceptable to him. He decides to console himself by ordering his valet/secretary/sex slave, Robert Brown, to perform oral sex on him. It is then that his wife Jane, from whom he has been estranged for the past seven years, sweeps in and announces that she’s come to stay.

Jane and Blaize has married 10 years before, when she was only 18. She had met him at a party and fallen instantly in love, even though she had not even had her debut and was warned against Blaize by her family and others. They apparently resided together in harmony (Jane comfortable with Blaize’s bisexuality and sharing his kinks) for three years before a tragedy tore them apart. From then on, Jane has stayed in the country, and Blaize in London, earning an ever worsening reputation and only consorting with men.

At heart, this is a pretty simple story – husband and wife marry young, face adversity and break up. It’s a storyline I often like. Blaize and Jane must find their way back to each other, with Blaize being the main stumbling block. In addition to the terrible loss that preceded his break from Jane, Blaize is extremely emotionally damaged from events that occurred in his childhood. (I really wish there’d been more information about the three years that Blaize and Jane were together, because again, it appears that they were happy; it’s not clear to me if he was just repressing the demons that haunted him during that time or there were problems that you just don’t go into in the story.)

So again, simple story: Blaize tries to get Jane to leave, tries to scare her away with his outrageous sexual behavior, finally makes a deal with her to give her what he thinks she wants if she will then just leave him alone. The bulk of the story has them fighting, fucking, and fighting some more. The conflict got a little tiresome, but over all, I have to admit that I found it entertaining on a basic level. The writing and plotting were smooth, the sex scenes were hot (really, really hot – I think you do sex scenes very well!), and I was less bothered by obviously anachronistic behavior than I had been in Simply Wicked. (Though I thought the way Blaize took Robert with him everywhere, even to soirees where a servant would not have been welcome, was a little odd. It seemed intended to further the secondary romance between Robert and a naval officer who had previously been involved with Blaize, though).

So, from a purely entertainment standpoint, Simply Insatiable was in the B range, probably closer to a B+ than a B-. Except for those issues I mentioned earlier. This is the second book in the series that I have read (there are three earlier books – Simply Sexual, Simply Sinful and Simply Shameless – that I haven’t read); in both books, the hero turns to gay sex (and not just gay sex, but kinky gay sex, involving BDSM) after being sexually abused by a man. In both books, the hero ends up with a woman, who in a sense redeems him from his “perverted” desires. Now, to be fair, in both books there are indications that the hero will continue to have sex with men, but in the presence of and with the participation of the heroine in the future. It bugs me, however, that the heroines are apparently only allowed to have limited sexual contact with the other men involved – for all that these two books are far outside of “traditional romance” in many ways,   they remain conventional in others. It’s okay for the heroine to receive oral sex from another man – at the hero’s direction – but not for another man to put his penis in her vagina.  I think this mixture of romance conventions with straight – no pun intended – erotica was more personally frustrating to me than the possibly offensive depiction of sexuality.

I say “possibly” above because I’m not really sure how I feel about the depiction of the heroes’ sexuality in these books. On the one hand, I can’t say I’m personally offended – I’m really not. And I realize that both romance and erotica can have strong fantasy elements (not in the flying unicorns sense, obviously, but in the men-don’t-really-behave-that-way-in-real-life sense). So I’m loathe to criticize this depiction too harshly. At the same time, I do find it problematic – I found it problematic in Simply Wicked and I find it problematic in Simply Insatiable. Again, I’d be more comfortable with the fluid sexuality if 1) the female characters were also allowed the same license and 2) the heroes didn’t both have their sexual   proclivities tied up, seemingly, with the fact that they’d been sexually abused.

I liked the characterization in Simply Insatiable pretty well – neither Blaize nor Jane are groundbreaking characters but they are fairly well drawn and sympathetic. I did like the secondary romance between Robert and the naval officer David. I found Robert’s relationship with Blaize icky and deeply unhealthy, but apart from this dysfunctional relationship, Robert seemed less tortured and conflicted by his sexuality than Blaize or the hero of Simply Wicked.

I found the denouement a little rushed and unconvincing; Blaize just sort of seems to turn around without a lot of visible motivation. In the end he seems almost too forgiving of the man who wronged him.

All in all, despite my criticisms, I did, as I’ve said, find this book pretty entertaining. It may sound strange given my issues with the themes of this series, but I think I may just have to seek out the earlier books. My grade for Simply Insatiable is a B-.

→ Jennie
Previous article: If You Like … Stories with Good Mothers
Next Post: Paranormals by the (Unscientific) Numbers