Thank you for sending me a complimentary copy of this short story. Because it is short, I admit I don’t have much to say about it. When I was told that this book was connected to another short, “Silent Blade”, it made sense to read it and review it together. I had no problems reading “Silver Shark” as a stand alone should the readers wonder where to start. However, the couple in “Silent Blade” play a role in “Silver Shark” and thus scenes from “Silver Shark” serve as a kind of epilogue (complete with kids!) to the couple in “Silent Blade”. While both stories are set in New Delphi, Silver Shark takes the world building a different place. It could be argued that absent the New Delphi setting, these were two very different worlds.

One thing I think is wonderful, though, is the examination of the clan idea here. Andrews writes about this topic in all of her books, but most obviously in “On The Edge”, a book I enjoyed tremendously every time I read it. The clan is both powerful and protective, but it can also be stifling and dangerous. It can be a haven or a hell. In these shorts, I think you see both sides of the clan system and within the clan system, the niche that can be carved out for two special people. 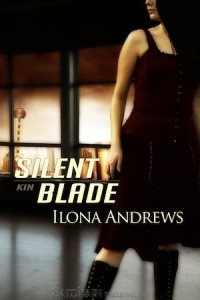 In a world where family meant everything, Meli excised herself from her clan to become their silent blade, an assassin that carries out threats on behalf of her family but because of her excision, the acts don’t reflect poorly on her family. The Galdes clan asks her to do a hit on Celino Carvanna because he is underbidding a project that the Galdes clan needs. The request is sweet because Celino Carvanna once broke Meli’s heart and led her to excision. Meli decides on a course of revenge that was surprising and held quite a bit of suspense. Would she kill him? Is there something worse than killing?

One thing that is remarkable in these shorts was the ease of the world building. I particularly liked the small details. This story and its sequel is a sexier, more romance oriented story than previous Andrews’ works. I thought that the sexuality of the story fit better here than in Silent Blade. The one problem I had Celino. I understood why Meli loved him. She was brought up to love him, trained herself to love him, and believed in her love for him wholeheartedly. I did not find Celino to be worthy of Meli’s love. He was cruel in his initial rejection of her. She forgives him because he was fighting the yoke of obligation and bondage and Meli was persistent in her pursuit. Unfortunately, I found his rejection of her to be telling of his character which was shallow and thoughtless and his later pursuit of her really didn’t change my mind. He pursued her relentlessly but didn’t show any change of character. He was still selfish but maybe less shallow. At least older, he appeared to appreciate different things although much of them still seemed physical. This was a quick and enjoyable read but I did wish that Meli found someone else to love, as her undying devotion seemed wasted on Celino.  B- 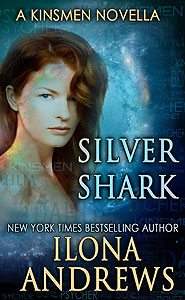 Claire Shannon is a psycher who can kill people via mind attacks. In a Matrix-like interface, Claire and other psychers enter the technological world by hooking up to a network and then entering the bionet. While both “Silent Blade” and “Silver Shark” take place in the same world, I don’t recall the bionet being mentioned. This story felt a bit more science fiction whereas the first one was more fantasy. Claire lived on the planet Uley and was part Brodwyn retainer, one of the two entities that fought for supremacy on the planet. She was not a Brodwyn retainer by choose, but by circumstance. When Brodwyn falls to Melko, the other competing Uley faction, Claire is shipped off planet to New Delphi. As a Grade A Psycher, Claire would be terminated so she hides her abilities and passes herself off as a secretary. As a refugee, she must find and maintain employment or be deported back to Uley where the Melkos would kill her. She is accepted as a secretary for Venturo Escana, the head of a powerful Escana family. When Claire meets him, she is literally struck dumb by his golden magnificence.

Claire lives in a building with other refugees and they come to her, knowing that she is a high level psycher, when something goes awry and she needs to enter the bionet. Once in the bionet, however, she can be detected and her placid safe life might be destroyed.

Claire has very protective instincts, ones that won’t allow her to turn her back on those that look to her for protection. Veturo is much like that as well. He’s created an empire from which he cares for people and destroys those that work against him. As in “Silent Blade” the small details are used to great effect:

Claire watched it for a few seconds, picked up the knife, and chopped the pepper.

It was Saturday morning and she had woken up with a sudden need to prove to herself that she could cook. Immigration had fully stocked her refrigerator with raw ingredients, so she set them out on the counter and had the AI run a comprehensive analysis finding a combination that would result in a beginner-level recipe.

“One peeled compa, cut into strips.”

I found the immediate sexual attraction that Claire had toward Venturo to not be in keeping with her character that is supposed to be totally locked down and numb from her war experience. I understand that she was evolving due to the exposure of color and life at New Delphi, but the immediate lust seemed jarring. The bionet scenes seemed a little strange to me.  Once in the bionet, the characters can shape shift and do all sorts of different things. It also seemed like a humid jungle.  In my head, it looked like a cross between My Pretty Pony and Avatar.  The story tends to jump around a lot, first from the planet, then to New Delphi, and then into the bionet, and then to Meli and Celino’s home.  For a short, we covered a lot of ground that could have been better used in developing the emotional components that seemed to underpin the story.  C+

It’s hard for me to grade these two shorts because of their length, I found myself wanting more. For existing Andrews fans, it would be a shame to miss these stories. On the other hand, for new Andrews fans, I’d recommend one of her traditionally published books like “Bayou Moon” first because the fuller length story is more satisfying.

→ Jane
Previous article: What January is Reading as of 10/09/2011
Next Post: REVIEW: Daughter of Smoke and Bone by Laini Taylor