ShadowFever delivered all the answers I wanted to know about your fascinating world of human and Fae, and yet, after my late-night read-a-thon I feel about ShadowFever like Mac feels about herself through much of the book: bipolar. 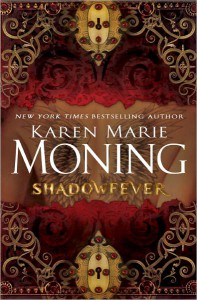 ShadowFever is the culmination of the search for the Sinsar Dubh, a ageless Fae book of immense power that gives its reader the key to the Song of Making-‘the ability to create life. The fifth book in the Fever series, this story could have been a mad dash to the finish line if it wasn't bloated with internal character thoughts and philosophical musings on good and evil. I have to admit, I often skimmed paragraphs that weren't essential to moving the story forward. Some of this would have been okay, but I thought the book often got bogged down in unnecessary detail. For those of us who are already deeply invested in this series, it's interesting, but even I, a Fever-aholic, thought it was too much. I imagine readers who are luke-warm on the series will find it irritating.

Yes, the book delivers exactly what I wanted. Yet, as a stand-alone book, ShadowFever doesn’t work. It's a book that offers answer, drama, more answers, more drama, on and on, until it ends. For someone who hasn’t read all the other books, the big revelations won’t mean much, they’ll just be “oh, okay” moments, and because the answers and drama refer to so many events that occur in previous books, I think it would fall flat for a new-to-Moning reader.

I found reading ShadowFever to be a bit like riding a roller coaster. The emotional ups and downs were tremendous. I was by turns sad, excited, angry, elated, and chanting "Go Mac!" Then I'd get bogged down in character ruminations (which I skimmed), before the action would start up again.

There's a big mystery of "is she or isn't she' through the latter half of the book. Going into ShadowFever my burning question was "What is Barrons?' But that's not the right question (although it is a valid question that is answered). The real question is "What is Mac?' The quest for the answer keeps the tension ratcheted up; it's also responsible for a lot of Mac's long internal ruminations. And, yes, dear readers, the answer is revealed. In fact, no question goes unanswered in ShadowFever's 507 pages.

I was absolutely blind-sided by who was responsible for Alina's death (Alina is Mac's sister and it's her death that starts Mac's quest for the Sinsar Dubh). I should have seen it coming (hints were dropped in book 4) but I didn't. There were moments when it felt like my heart stopped and this was one of them. Learning the truth made me sad and reminded me that a recurring theme in ShadowFever is the loss of innocence.

Characters from eleven different books make appearances (often very brief) in ShadowFever. Except in a couple of scenes their cameos aren't necessary for the telling of this story, and their appearances add to the massive length of this book. On the other hand, those of us who've been with you since the Highlander series have an opportunity to meet some beloved characters again.

In the end, I believe the Fever series would have made a really great single book. The time investment for those of us who started reading it in 2006 is probably a large part of why we're so passionate about the books-‘we've been thinking about Mac and Barrons for more than 1000 pages over FIVE YEARS. I suspect their story could have been told in 450 pages or less. B-.

P.S. The last scene at the end of the book was complete schlock. The Barrons I've come to know would never be the guy working the grill at a BBQ.