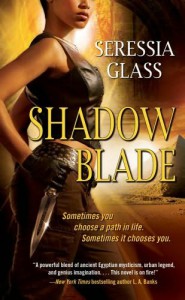 Fictional diversity is a favorite topic here at Dear Author, and a personal focus of mine. I’m very resistant to the idea that readers don’t want to see more diverse representation in their books because I’m a reader and I very much want to see that. So I was very happy to give your novel a try.

Kira Solomon is a Shadowchaser, an agent for the Gilead Commission, an organization that fights the forces of evil (here called the Fallen). By day, however, she works as an antiquities expert and she finds her two lives colliding when her mentor is killed and his latest project, an ancient dagger, falls into her possession. Of course, the Fallen want the dagger and are tearing apart Atlanta to get it. To further complicate things, the dagger’s rightful owner, an immortal warrior, comes looking for it as well.

Longtime readers of the urban fantasy genre will probably not find anything especially new or unique in the premise or plot. In many respects, Kira is your standard urban fantasy heroine in terms of personality and traits. She’s a loner. She has a tragic backstory. She doesn’t get along well with authority figures. She’s a special, chosen one.

I did like her special ability, however, and it did go a long way to explaining Kira’s standoffishness. Kira is a sort of ultra-sensitive psychometrist; she can tell the history of any object simply by touching it. It’s so powerful that Kira has to take special measures just to wear clothes or eat food without going insane. It’s this same ability that landed Kira into the hands of the Gilead Commission in the first place, when she inadvertantly sent her adoptive sister into a coma as a child.

You’ll find the other staple UF elements here: the dead mentor, the mysterious artifact that everyone wants, the strained relationship with her immediate superior. Even the immortal love interest is here, although I liked the fact that Khefar is not a vampire and that his brand of immortality is a little bit on this side of creepy.

On the other hand, I found it very refreshing that the major characters were not white. (And even better that the cover reflects this fairly accurately!) I liked the fact that Kira had a good female friend who had her own life and wasn’t just there on the page to make Kira look better. The urban fantasy genre can always use more of that. I don’t know much about Egyptian mythology so I can’t speak at all about the authenticity or accuracy, but what I read of it here gave the book a fresh, added dimension. And Anansi was great.

Overall, I thought this was a worthwhile read. It didn’t necessarily break any new ground in terms of story but the very fact alone that Kira and company are black was enough to elevate this to a higher level for me. I look forward to reading about Kira’s next adventure. B-

Book not found at Fictionwise, Books on Board, Sony.