After your debut YA, Shadow and Bone, was recommended to me, I looked it up. What I read about it got my attention, because the book is a historical fantasy set in a world based on Russia. I ordered an ARC through NetGalley and began to read. 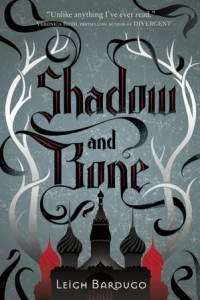 Shadow and Bone gets off to a good start with a prologue about a pair of orphans, girl and boy, who live in an orphan home on a duke’s estate. They are very close to one another, almost inseparable, each replacing for the other the family that they have lost.

One day the Grisha, powerful magic users, come to the estate to test the children for magical abilities. The girl perceives that there is something different about her, and if this difference is discovered, she will be separated from the boy.

Flash forward many years, and the girl is now a young woman. In the first chapter, the novel switches to her first person voice. Alina Starkov is now a mapmaker in her nation Ravka’s first army. Nicknamed “Sticks,” for her scrawny body, Alina feels weak and drab next to Mal, her beloved childhood friend, who has grown into a handsome tracker in the same regiment.

Orphans are looked down upon in Ravka, so Mal hides his past from others. Alina wonders if these feelings of shame over his past have distanced Mal from her, because where once they were very close, now they are growing further and further apart. Alina has romantic feelings for Mal, but he doesn’t seem to reciprocate them. Instead he takes her for granted and gives her less and less of his attention.

But these problems are dwarfed by something far more frightening – the Shadow Fold, a dark and magical space created centuries before by an evil, ambitious Grisha. Where once there was fertile land, farmers and their families, now there is only a pitch dark wasteland inhabited by vicious flying monsters called volcra.

Few people survive crossings through the Shadow Fold, which divides Ravka, but these crossings are attempted nonetheless, in order to ferry important products from east to west and back. Alina and Mal’s regiment is about to attempt such a crossing, and Alina’s terror of the Shadow Fold is overwhelming enough that Mal does his best to reassure her.

Alina is comforted by Mal’s caring, but wonders if either of them will survive the crossing, and if they do, whether Mal will resume the distance he has kept between them.

Around this same time, Grisha arrive to assist in the crossing using their magical abilities. Among them is the Darkling, a powerful Grisha descended from the same man who created the Shadow Fold. The Darkling rules over the Grisha and possesses enormous power. His carriage almost runs Alina over the day before the crossing.

Alina and Mal ready themselves to cross the Shadow Fold, but nothing can prepare them for the blinding darkness and the screeching, ravenous volcra. Alexei, a fellow mapmaker of Alina’s, is killed by a volcra during the crossing, and then Alina is attacked. Mal risks his life in the attempt to save Alina’s, but the volcra mauls him, and two more swoop down. Alina, keeping pressure on Mal’s wound, is at the end of her rope when she feels and sees white light in her mind, the volcra fly away, and she passes out.

When Alina comes to, she is back in the town of Kribirsk, from which the army began the crossing. She is marched to the Darkling’s tent and there the Darkling proves beyond doubt that Alina is a Sun Summoner, gifted with the ability to call forth light.

Ravka and the Darkling have waited years to for the birth of a Sun Summoner, the only hope of destroying the Shadow Fold. Alina is immediately whisked to the Grisha’s stronghold miles away from Mal, whom she’s not even given the chance to talk to. Once there, she is presented to the king as Ravka’s salvation.

But unlike the rest of the Grisha whom she comes to know and live with, Alina is neither beautiful nor powerful. She has no control over her abilities and cannot even call them forth without the aid of the Darkling or Bahgra, the ancient Grisha who trains her in using them.

Alina also trains in fighting tactics with a mercenary who teaches Grisha to defend themselves, but there, too, she is pitifully weak. Bahgra claims that this is because Alina is expending nearly all her energy in fighting and suppressing her own power.

Few of the Grisha are true friends to Alina, but the Darkling believes in her. Having seen him cut a man in half with his power in defense of her life, Alina is afraid of the Darkling, but also in awe of him and attracted to him. At the same time, she is homesick for Mal, who does not answer any of her frequent letters.

Is the Grisha’s world the place where Alina truly belongs? Is the magnetic Darkling trustworthy? Is Mal? Is Alina really suppressing her power, and if so, why? Ultimately, will she discover a way to use it and come to Ravka’s aid?

For the first two-thirds of Shadow and Bone, I was enthralled. Alina’s narration sucked me in, and despite the fact that the story was clearly going in the direction of ordinary-girl-discovers-she-is-really-extraordinary , I was riveted.

One of the reasons why was Alina, who despite her simple background and her physical and mystical weakness, showed a core of strength made up of loyalty, perceptiveness and intelligence. A second was the Darkling, a fascinating and morally ambiguous character in his willingness to be ruthless in pursuit of his goal of freeing Ravka from the horror that was the Shadow Fold. A third was Mal, who was there when Alina really needed him, yet absent in other ways. And even the side characters were interesting and multidimensional in this book.

Another factor in my enjoyment was the pacing, which was almost pitch perfect with only a couple of slow patches in the story, when Alina was learning details about the Grisha’s world, so that I was rarely less than wholly absorbed.

There was an aura of mystery to the Grisha that kept me turning the pages, and huge chemistry between Alina and one of her potential love interests. And that brings me to another point – this book managed the feat of giving Alina more than one man to feel drawn to without creating a triangle. The setting, too, came alive and was different enough to add to the excitement.

With all this going for it, the book was reading like an A- to me until, two thirds of the way through, something changed. I don’t want to spoil this for readers, since it happens late in the book. Suffice to say that a turn was taken with one of Alina’s love interests which disappointed me and vacuumed out some of my excitement.

The plot continued to be engaging as the story headed for its climax, and I kept turning the pages to find out how it would end, but the whole time it headed toward the ending, I wished I could undo this one thing that had disappointed me. It really was a shame because it took away some of the complexity and depth that had been in the story.

There was another, smaller disappointment for me when, in a pivotal scene, Alina was unable to do something necessary not just for her own defense but also for that of Ravka. This made me realize that as much as I liked Alina, she was generally a passive character, nearly always doing what others told her to do or suggested that she do. It wasn’t until the end of the book that she found the strength to break away from that pattern, and that makes me wonder if the pattern will resume again in the next two books.

Still and all, I know I will be reading those books, because Shadow and Bone was just that addictive. There is something about your voice that crackles with energy and invites the reader into the story. I don’t know what it is – partly the simple directness of the narration, partly the clever storytelling – but I know I want to read more.

Shadow and Bone is one of those tough to grade books. For so much of the journey, it had so much promise, and by the end it had a lot less. But even so it sparkled, and I haven’t stopped caring about Alina or Ravka’s fate. Ah, I’m so torn! C+/B-, I guess.

→ Janine
Previous article: REVIEW: Let Me In by Callie Croix
Next Post: REVIEW: Chase Me by Tamara Hogan