Jane was kind enough to send your book my way, knowing I have an affinity for prostitute romances. I can honestly say I’m glad she did, even if Seven Nights to Forever did contain some tropes that caused me more than an occasional eye roll. 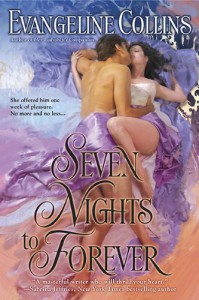 Rose Marlowe is a respectable gentlewoman living on her family’s modest estate in the country three weeks out of every four. The fourth week, Rose travels to London and works as a prostitute in a high-class brothel. A brothel that is patronized one night by James Archer, a wealthy businessman driven there by loneliness and despair. James and Rose find each other and are each pretty much gone for the other immediately. But there are obstacles – significant, soul-wrenching obstacles – between the two and their HEA.

Rose has come to the brothel after a bad experience as a member of the demimonde. The crushing debt her father left behind when he died had pushed her to such an unrespectable profession. Rose wanted to protect her younger brother, Dash, from the truth about the father he idolized, as well as give him all the things she thinks a young gentleman should have – an Eton education and and an estate that’s in the black financially. Yes, Rose is one of those – a self-sacrificing heroine.

So, Rose meets James, who could give her a run for the money in the martyr department. James married the aristocratic Amelia at his tradesman father’s behest – he is part of an exchange of money for social standing. The social standing is supposed to allow James’ beloved younger sister, Rebecca, to enter society (with Amelia’s sponsorship) and find a titled husband. James doesn’t expect much when he marries Amelia, but he’s not anticipating being saddled with the female Regency equivalent of Snidely Whiplash. Because Amelia, who we chiefly see through James’ eyes until the latter part of the book, is bad, bad, bad. She wasn’t a virgin when they married. She refused for a year after their marriage to allow him to visit her bed, and when she did allow it, she so demoralized him that he was unable to complete the act, a fact which she then mocked. She flaunts her lovers and abuses him verbally at every turn. James suffers it all in saintly silence, not wanting to jeopardize his sister’s chances at a brilliant Season and a good marriage.

So, for most of the book Rose and James are basically in a competition for the gold medal in the Doormat Olympics. Rose is particularly aggravating in the scenes where she continues to protect her brother from the truth of their financial situation even though he has dropped out of school and is living it up in London, running up debts that she must make good. To be fair, eventually there is some acknowledgment that Rose’s actions in regard to her brother are not in anyone’s best interest. But for the longest time I got the feeling I was supposed to believe that Rose was so noble, when in fact her behavior was stupid and weak.

Rose also has some odd moral strictures. She first came to London to find a protector, but left her first protector after a few weeks when she discovered he was married. She was with her second, presumably single protector for longer, nearly a year, before his abusive behavior drove her to the brothel. Rose seems to believe that it’s okay to have sex with married men in the brothel because “it’s only one night.” Now, I do understand viewing the protector/mistress relationship differently from the john/whore one, but having sex with another woman’s husband is having sex with another woman’s husband. From a cost-benefit analysis point of view, it seems to me that the protector/mistress relationship would be vastly preferable to a woman like Rose to being a prostitute and having to sleep with seven different men every month (she appears to only take one client a night). But Rose never misses a chance to wear a hair shirt when she can.

James just seems plain depressed. He works long hours to avoid his wife, sometimes sleeping in his office. He doesn’t appear to ever defend himself against her abuse (until the end of the book; her comeuppance was satisfying to read). He seems to be resigned to a loveless, lonely life and only gives in to the urge for the comfort of another woman’s arms in a weak moment. But once he meets Rose, James is hooked.

I don’t want to be too hard on James or judge him by antiquated standards of masculinity. But…there’s no getting around the fact that his behavior comes off as wimpy. Maybe it’s just because doormat heroes are so much rarer in romance than doormat heroines, but while Rose inspired annoyance, James engendered an odd mix of distaste and respect/affection in me. On the one hand, even if I don’t want to be all gendered in my thinking about his character, there’s still some part of me that thinks a real man doesn’t let a woman treat him that way. I don’t love it when female characters are doormats, but I’m more acclimated to it.

At the same time, the more progressive part of me likes the fact that James is not a traditional romance hero, and that he’s allowed to be so vulnerable and weak. When it comes right down to it, James is simply a nice guy.

The relationship between James and Rose is pretty straightforward – he quickly decides that in spite of his assurance to himself that his brothel visit would be a one-time thing, he can’t stay away from Rose. Rose runs more hot and cold – she tries to push James away several times, and if it weren’t for the fact that their many misunderstandings tend to be short-lived, I would find the lack of communication between them pretty annoying. As it is, there is a pattern that James and Rose follow several times: he hurts her feelings or makes her uncomfortable, and she withdraws. James is confused and bewildered. Then they resolve it. Lather, rinse and repeat.

The secondary characters are kind of a mixed bag: Amelia, the evil wife, is broadly drawn and pointlessly mean. I would’ve liked to see a little more depth in her characterization. She’s balanced by the sensible and kind Rebecca, James’ sister, who (shockingly!) likes town and wants to have a brilliant season, though she doesn’t know how much her brother is sacrificing to give it to her. I found this refreshing, given that virtuous characters in romance (particularly the female ones) invariably prefer the quiet pleasures of the country to the gaudy attractions of town.

The love scenes in Seven Nights to Forever are well-done – they are both hot and rather romantic. The latter may seem surprising in a story about a prostitute and her john, but since there is an immediate emotional connection between Rose and James, it makes sense. Whether the immediate emotional connection itself makes sense is another question. I’m not a big fan of “love at first sight” and Rose’s attachment to James was even more questionable to me given the nature of her usual connection to men. I suppose that’s one of those romance tropes that cause my eyes to roll.

As I said above, I’m glad I read Seven Nights to Forever – it is a flawed but involving book. My final grade: a high B-.