I’m a fan of your contemporary YA novels. I really like their empowered teen girl and positive female sexuality outlook. While Secrets and Lies isn’t a brand new novel-length work, I enjoy your writing enough to give shorter stories a try. Here, we have two novellas that reunite readers with characters from The DUFF and A Midsummer’s Nightmare, respectively. 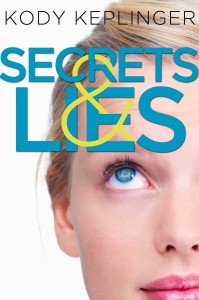 “Abbreviations and Alliterations” features Casey and Toby from The DUFF. Casey is the best friend of The DUFF‘s heroine, Bianca, and Toby is the guy Bianca dated briefly while trying to break it off with that book’s hero, Wesley.

Both have since graduated from high school and are home from college during winter break. But things have changed for the former cheerleader and nerd, and the two eventually hook up. And much to their surprise, their relationship eventually evolves into something more. Unfortunately, Casey feels guilty about dating her best friend’s ex and rather than telling Bianca the truth, hides her relationship with Toby. This, of course, leads to some problems.

I feel conflicted about this novella. I understand that it can be awkward to date your best friend’s ex. It does feel vaguely incestuous. That said, Bianca dated Toby for such a short period of time and it wasn’t very serious. I liked that Casey was a flawed heroine, trapped in her own desire to be the perfect best friend, but it was hard to sympathize with her at times. Due to her guilt, she put off telling the truth to Bianca, which led to her telling outright lies to keep the relationship with Toby a secret. Keeping the relationship a secret only hurt Toby, who wanted to be public about this great, new girl in his life. No one likes being someone’s dirty secret. Her actions didn’t speak well of her, of her friendship with Bianca, or of her relationship with Toby. C-

The second novella, “People Worth Knowing,” reunites us with Bailey, who we first met in A Midsummer’s Nightmare as the little sister of the book’s hero. Bailey is now in high school and on the cheerleading squad. She wants to be popular but finds it easier said than done. The amount of performance necessary to fit in and play the part is exhausting and stressful.

But when the school’s queen bee takes an interest in her, Bailey thinks she’s finally joined the cool kids. Unfortunately, she soon discovers her new best friend has some questionable tactics and a cruel streak. Now she has to choose between supporting the status quo or doing what’s right, even if it means destroying her own reputation in the process.

As far as I’m concerned, “People Worth Knowing” is the stronger novella. While the romantic subplot is almost negligible, I thought the bullying storyline was well done. Like A Midsummer’s Nightmare, the novella portrays the shape bullying takes in an era of the internet and social media. I like this because it drives home the point that bullying isn’t just being beaten up after school and having your lunch money stolen. It takes other forms too.

Bailey’s dilemma was genuinely portrayed. Yes, we’d all like to think we’d do the right thing and turn in the bully, but when you’re the new girl trying to fit in with people who’ve known each other since they were five, doing the right thing might not be so easy. I also thought the twist at the end regarding the girl who was bullied put an ironic spin on a novella that might otherwise be too heavy in tone. B-

While I thought both stories were worth reading, I was also left wanting more. I feel your writing suffers at the shorter lengths because there is less room for subtlety and layers. I know it’s a limitation of the form, but not all novelists make good short story writers and vice versa. Still, fans who like revisiting old characters might enjoy these. Everyone else, start with one of the full-length novels.