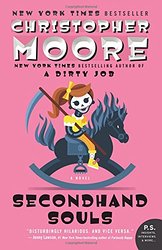 Something really strange is happening in the City by the Bay. People are dying, but their souls are not being collected. Someone—or something—is stealing them and no one knows where they are going, or why, but it has something to do with that big orange bridge. Death Merchant Charlie Asher is just as flummoxed as everyone else. He’s trapped in the body of a fourteen-inch-tall “meat puppet” waiting for his Buddhist nun girlfriend, Audrey, to find him a suitable new body to play host.

To get to the bottom of this abomination, a motley crew of heroes will band together: the seven-foot-tall death merchant Minty Fresh; retired policeman turned bookseller Alphonse Rivera; the Emperor of San Francisco and his dogs, Bummer and Lazarus; and Lily, the former Goth girl. Now if only they can get little Sophie to stop babbling about the coming battle for the very soul of humankind . . .

So, thanks for the much needed recap of “A Dirty Job,” which I desperately inhaled because yeah, it’s been a while since I read the prequel. There’s so much to know from that book that I would have been seriously lost had I tried to read this one on its own or without being brought back up to speed.

Ugh and again with the very strange and quite frankly very creepy Squirrel People. Thankfully we don’t get to them until after seeing some other old friends from this series and the “Bloodsucking Fiends” books like Inspector Rivera, now a part time book seller (yay!), his former partner and lunch whore Cavuto, seven year old Sophie with a mouth like a sailor, two hellhounds and her devoted aunties Jane and Cassie – now happily married. The Emperor and his men still patrol the city and soon we meet Mike Sullivan, Golden Gate bridge painter and a very important man in the story. Lily is a crisis hotline counselor and Minty Fresh is still selling jazz and out-cooling everyone else. Finally Audrey and Charlie-in-his-new-body round out the good guys.

Rivera is now a Death Merchant though he hasn’t been collecting his souls as the “Great Big Book of Death” says to. He realizes this when suddenly it gets edited to now tell him “So you fucked up …” and then spells out that Bad Things can happen with the demons of the Underworld going all crazy and shit. The appearance of a screaming banshee in his bookstore sort of rams home the point as well. When the Celtic death goddess Morrigans show up along with a new evil villain with a penchant for dressing all in yellow plus the hellhounds disappear and Sophie’s powers seem to have blinked out, it’s clear that once again, the city of San Francisco is under threat from, as Minty puts it “the motherfuckin’ forces of darkness” .

There’s almost an obsessive and more than a little icky emphasis on a certain part of SP Charlie’s anatomy – he’s 15 inches tall and it’s 10 inches long so there’s a horrible visual that’s burned into my brain. When Charlie gets a new body, his continuing mental connection with the little creature gets unsettling. But then the Squirrel People have always squicked me out. Charlie is still subject to his beta male DNA belief that someone is always fucking with him. When the chips are down and life as we know it is under siege, Charlie does charge into the thick of it with the Mint One, a loaded for bear (like bear?) Rivera and the Buddhist nun he’s banging by his side.

Lots of characters, upon hearing or having explained to them the bizarro things happening in the book, say “Wait. What?” I said it a lot too. Or I thought it which when reading a book is the same thing. But even with all the weirdness of the first book which was then compounded by the initial weirdness of most of this book, there reached a point where I thought “This is getting even fucking weirder!” There’s all kinds of badass Underworld fucked up shit going down here. Yet I still found myself glued to the story to see what would happen next. Yeah, it’s a little out of control but I’ve come to expect that. There are deaths but at least one character came back after the aforementioned “fucking weirder” scene. And since the Universe is now – hopefully – in better balance and the pissed off Squirrel People are gone, maybe all the characters can settle down and not be looking over their shoulders for a banshee with a stun gun. B-