REVIEW: Scandal of the Year by Laura Lee Guhrke

Although I'm not always a fan of the back-to-back book release, in the case of Wedding of the Season and Scandal of the Year, I appreciated being able to follow up Will and Beatrix's story with Julia and Aidan's. Although their match-up was anticipated by the first book, they are, in many ways, an unlikely couple, and, in my opinion, engaging and compelling. Structurally, I feel that Scandal of the Year suffers from the same pacing problems that the previous book does, but emotionally, I find the romance more satisfying. 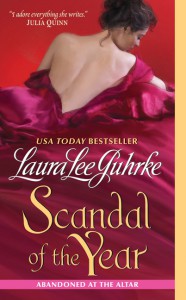 Julia, the Baroness Yardley, has finally been granted a divorce from the man to whom her parents basically sold her after her scandalous and disastrous affair with a penniless but handsome poet and political radical. While she has never revealed the details of her miserable marriage, she spent most of her time as far away from her husband as possible – drinking, driving fast, smoking, and spending money — until her husband found her in bed with Aidan Carr, the Duke of Trathen. No one but Julia knows the circumstances under which Aidan ended up in her bed, including the upstanding Aidan, who remembered drinking and kissing Julia, but could never bring to mind the intimate details of their (in his opinion) reckless coupling. Which makes his recent notoriety as co-respondent in the divorce petition even more frustrating. But then, everything about "saucy" and undisciplined Lady Yardley is frustrating to Aidan, and it has been since their first meeting more than years ago, when he was a young duke at Eton and she was but a sassy, flirty, beautifully tempting young woman. Napping on a bridge against a spinning wheel. From the first, the fundamental differences in their natures was apparent:

She seemed to be some sort of actress, and he was a duke, and the only friendship that could come from that sort of situation was a rather unsavory one. Still, it would be unseemly to express that thought aloud. "So," he said instead, "you are an actress?"

"This afternoon." She waved the sheaf of papers in her hand again. "I have only a bit of time left to learn my lines, so I decided to find a nice quiet spot and see if I can memorize enough to keep from making an utter fool of myself today. I fear it's hopeless, though, for I've left it too late."

Aidan, who never made a fool of himself if he could avoid it, and who never left anything until the last minute, felt impelled to point out the obvious. "Wouldn't it have been wise to spend more time preparing for your part?"

"Well, yes," she conceded with another grin, "but why do today what one can put off until tomorrow?"

"You don't seem to be taking your role very seriously."

"Petal, I don't take anything seriously." She cast him a shrewd glance. "You, I'll wager, have the opposite problem. Do you drink?"

He blinked, taken rather aback by this seemingly irrelevant question. "No," he answered with a decided shake of his head. "I don't. Why do you ask?"

"You should drink, at least a little. You're wound a bit tight. A drink now and then would loosen you up."

"It did, I'm afraid. With disastrous results."

And thus it would again, quite a few years later. Although for Julia it is hardly a disaster, as she had been growing quite desperate to be free of her husband, who showed no interest in discarding his renegade wife.

Still, Julia does have a secret about that day, one that pulls on her conscience, although not more than her relief at her newfound freedom. Besides, she is not averse to making Aidan suffer a little, to tease a smile from him with some provocative banter or to make a blush break through his solid self-control. Still, it is Aidan's honorable nature that makes him the one she goes to, after her divorce, with the problem of her mounting debts, knowing that she can count on him to help her find a way out of total financial disaster.

Aidan is not unaware of the irony in Julia's request: "If this were a melodrama . . . I would make you my mistress." And yet, his own responsible nature and the seriousness with which he knows he must renew his search for a duchess (his erstwhile fiancée, Beatrix Danbury, having reunited with her first love in Wedding of the Season), knows this is not possible or even wise, although he is certainly plagued with incessantly carnal thoughts about Julia, which seem to increase in proportion to his frustration at not being able to recall their adulterous tryst. So he decides, in typical Aidan style, to test himself by making Julia his matchmaking advisor rather than his mistress, so he can basically inure himself to the appeal of her physical presence while he pursues his ducal duty.

This set up is very familiar, of course, and more interesting is the way the relationship between Aidan and Julia develops. First of all, Julia is not trying to undermine Aidan's marriage options at every turn. She takes her advisory position seriously and wants to see Aidan married to a woman who can appreciate him and whom he can appreciate, if not love. Julia is, herself, not interested in marriage again, let alone a romantic relationship with a man, and she already feels that prick of guilt for having Aidan named in her divorce case. Aidan on the other hand, is a man who takes his responsibilities seriously, who does not spurn the traditions of his rank and position, but that does not mean he is uptight or a prig. Once he is decided on a course – including the sober seduction of Julia — he is straightforward about it and honest with himself. And as in Wedding of the Season, the obstacle here to Aidan and Julia's everlasting happiness is a basic conflict between what each wants and believes they need. Julia is matrimony-averse, and Aidan is matrimony-intent. While we can see the opposites attract logic of their mutual passion, each is stubborn in their position and understandable in their logic:

"Aidan, you can't possibly want to marry me."

She took a deep breath, and resumed the conversation. "You are only a scandal because of me. Besides, being considered a scandal is different for a man."

"In the eyes of society, perhaps. Not in my eyes. And I don't care what society thinks anyway."

"Are you saying I would be ashamed of you?," he asked, buttoning his trousers. "I wouldn't, I shouldn't, and I'm not. I won't ever be."

For me, the pleasure of this book was in Julia in Aidan, in watching them spar with themselves and their feelings for each other. I love that she calls him Petal, and I love that he can tease her right back, sometimes so subtly she's not sure he's doing it. The prose is serviceable, if not lush, and the clichés I've noticed in other books are evident but did not feel as intrusive to me in either this book or the last (perhaps because I enjoyed both more than the previous series?). There were sections where I felt I was reading details repeated and not yet edited out, a few unintentionally funny lines (e.g. “It was déjÃ  vu all over again” — if this was meant to anticipate Yogi Berra’s quote, it was blatantly anachronistic), and some grammatical roughness, all of which I chalked up to the ARC format and hope were fixed before final publication.

Further, there are several substantial sections of flashback, which felt somewhat overweening, even though they all delivered some important information about Aidan and Julia’s relationship and/or each character individually. What I found interesting about this was that for all of this backstory, I feel that some of the most valuable context for this story was what I gleaned from Wedding of the Season, not from the extensive flashbacks in Scandal of the Year. I am curious to see if readers who are not familiar with the first book when they read this one will have the same take on Julia and Aidan as readers who are.

Ultimately, had the pacing here matched the promise of the two characters, it would have raised the book to another level. Unfortunately, what was another interesting, largely internal, conflict got solved almost magically, undermining the structural integrity of the characterizations and cheapening the ultimate resolution. So, while I actually enjoyed Julia and Aidan's story a bit more than I did Beatrix and Will's, the grade for Scandal of the Year remains the same: B-

→ Janet
Previous article: Monday Midday Links: More YA Whitewashing?
Next Post: Is the guardian/ward trope an incest fantasy in disguise?