I’ve read one collaboration by you before and it was a … less than successfully executed paranormal romance. I had low expectations going into this book but I was secretly hopeful. Linda Howard’s books remain some of my favorite in the genre. I keep waiting for the magic to happen again. 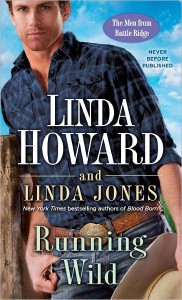 Running Wild is successful on two fronts. The blend of authorial voices is seamless. I can’t tell one from the other. Second it is much more romance focused than any of the recent Linda Howard hardcovers.

The heroine is on the run from a date turned stalker turned murderer of a woman who borrowed her raincoat. Because he is a police officer and previous reports of his negative behavior were brushed off, Carlin Reed goes off the grid and finds herself in a small town in Wyoming. She obtains a job at a local cafe owned by a woman who takes pity on her or at least recognizes that she is a woman in danger. From there she gets a job as the cook/housecleaner for a large, local cattle ranch owned by Zeke Decker.

There are little surprises in this book. Zeke married poorly the first time to a woman who longed for the city lights. Initially he resists the attraction Carlin embodies. Then he resists because she works for him and he has to set a standard for his men. Carlin initially has no interest in any man and Zeke is big and brawny and a little scary to her. She serves as a competent cook and housecleaner but as the only woman on a male dominated ranch spread, she attracts attention of the men present who don’t all have good intentions toward her.

But I liked the slow progression of the two falling in love. As Carlin becomes comfortable at the ranch and Zeke sees that she’s not the same as his awful city loving ex wife (eye roll), their attraction is allowed to grow naturally. Carlin keeps her secrets from Zeke, however, and always has one foot out the door, ready to leave on a moment’s notice. Zeke realizes this and wants to help.

There is a light suspense storyline due to the unresolved issue with the stalker. His position in law enforcement and his proficiency with computers makes him a formidable villain. The closing suspense scenes were frightening as an unexpected person was placed in real jeopardy.

While not perfect, this was an enjoyable read, reminiscent of the older classic Howards. I hope that the two continue to collaborate. B-