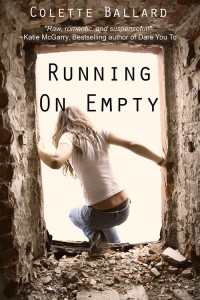 For the past few months, I’ve been dabbling in the older YA/new adult subgenres but I find myself looking for something a little different from what’s out there. I like tattooed bad boys as much as the next person but there is such a thing as too much. When I read the premise of your debut novel, the suspense aspects sounded right up my alley.

River Daniels is a girl from the poor side of town. But she’s dating the star quarterback darling of their high school. She should be glad, right? Everyone wants to be Cinderella.

Except her boyfriend is controlling, jealous, and violent. When he gets tired of River’s refusal to have sex, he tries to force the issue and River accidentally kills him in self-defense. Unfortuantely, her boyfriend is the son of a rich and powerful family and there were no witnesses. Knowing no one will believe her, she goes on the run. But there’s only so much one 17-year-old girl can do on her own.

While I admit I scrutinize the use of sexual assault in novels, its inclusion here didn’t bother me. Maybe it’s because of recent headlines like the Steubenville case, but the execution rang very true. It’s a sad fact of life that society generally blames the woman in situations like this. River didn’t mean to kill her boyfriend. She was just trying to fight him off. But because of her background and her boyfriend’s identity, none of that will matter. I can’t blame her for running. Who’s going to believe “trailer trash” over the son of a rich family?

I loved that River’s friends, Kat and Billie Jo, stuck by her side. That they, in fact, chose to run with her when she left town. Even when their relationships later become strained due to the stress of being on the run and in hiding, I thought it was well done. These are girls who may not have perfect families and backgrounds but they stick with each other through thick and thin. They are each other’s family, when their own families have checked out. Their friendships are multilayered — not always rosy and sometimes contentious, they always do their best to help each other when things get tough.

The romance with Justice was also well done, in my opinion. This isn’t just because I have a soft spot for the friends become more trope. Justice was River’s first love and she never really got over him. But she did her best to move on, though that unfortunately led her to Logan. She was ready to accept that they may only ever be friends for the rest of their lives. The River and Justice romance is a perfect example of friends to lovers: how they don’t want to mess up what they have and yet how they have a hard time struggling to see the other person with someone else.

While I enjoyed the story, there are some plot contrivances that fall apart upon further scrutiny. Of course the girls run into an old man with a heart of gold, willing to help the and overlook that one of them is plastered all over the news and accused of murder. Of course this man has connections that conveniently help them in their moment of need. Don’t get me wrong. I liked Charlie a lot, but it was too neat and pat.

The storyline involving River’s biological father at times seemed tacked on. In many ways, it was almost as if his presence was necessary for no other reason than to help River in the end. And that the only way to explain his presence in the book was because he was River’s dad. I simply wasn’t sold on this part.

Overall, though, I liked this book. The relationship between River and her female friends, and the romance between River and Justice, kept me reading even when certain aspects failed to hold up under further scrutiny. Dare I ask if a sequel featuring Kat is in the works? (I loved Kat.) B-