REVIEW: Rules for a Proper Governess by Jennifer Ashley

JaneB- ReviewsEarly Victorian / HistoricalComments Off on REVIEW: Rules for a Proper Governess by Jennifer Ashley 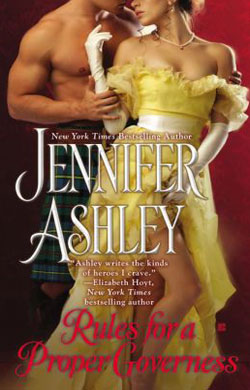 As many readers here know, I’ve really struggled with the historical romance genre in the past few years despite it being my favorite genre in romance. And it’s not that I haven’t been trying to read it, but it’s been hard to lose myself in the books.

I was chatting with another reader and mentioned that I didn’t think historicals were as raw and earthy as I would like (because my tastes were changing as a reader). Despite the title, the story in Rules isn’t rigid and uptight. It’s a story about a small time grifter, a barrister with secrets, and two children who need more love in their lives.

The heroine is Roberta “Bertie” Frasier, a small time thief. A friend of hers is being tried for murder whom she knows is set up to take the fall for Bertie’s would be suitor’s brother. As she watches from the gallery, Bertie is convinced that she’s watching the verbal lynching of her innocent friend by barrister Sinclair “Basher” McBride. When McBride turns the tables and gets her friend off, Bertie tumbles half in love.

Her father and the suitor, however, aren’t as pleased. Her father sends her to steal something from McBride, just to get a little of their own back. She does so because the threat of being beat is a good motivator and, truthfully, she wouldn’t mind getting closer to McBride. The theft of the watch leads to McBride chasing her into a trap but Bertie doesn’t want to see McBride hurt so she helps him escape, but not before she steals a kiss from him.

McBride would have let about anything go, but not the watch. It was given to him by his long deceased wife and he treasures it. After Bertie saves him from a beating and kisses him senseless, he returns home with a sense of emptiness.

Bertie is intrigued by McBride and semi stalks him. This stalking leads her to be in the right place, at the right time, when the governess for the McBride family basically quits on an outing with Sinclair’s two children. The boy is a terror and the girl is a silent wraith. Bertie takes them to a pastry and tea shop, enjoys the heady experiences of being part of the moneyed class.

Andrew ate most of the cakes. Bertie managed to eat her fill in spite of that, and she lingered over her last scone. This was like a wonderful dream—a warm shop, clotted cream, smooth tea, and no need for money. What a fine world Mr. McBride lived in.

I love that Bertie is the instigator. She’s the one to kiss McBride, more than once. She inserts herself into his life and readily accepts his offer as governess. And she becomes instantly protective of not only McBride, but his children and his household. In some ways, the script if flipped here. Bertie is the stalker. Bertie is the aggressor. Bertie is the possessive one. But she does it in such an easy, nice way that you can’t help but love her.

She’s a creature of instinct. Every action she takes is of instinct and very little forethought. Fortunately she doesn’t come off as headstrong and stupid but rather entertaining, fun, and engaging. I read a lot of her scenes with a smile on my face.

McBride is a little harder to warm up to. He still has strong feelings for his dead wife and he’s not a particularly good father, something the story really doesn’t acknowledge. But because Bertie finds McBride fascinating and desirable and I like Bertie, I root for their inevitable pairing. There’s a surprise in McBride’s past that I really, really enjoyed. It made his relationship with Bertie all the more believable and helped soften his sometimes priggish edges.

If there’s a strong character arc change in either one, I didn’t see it. Yes, McBride falls for Bertie but Bertie is the same cheerful, sweet, impulsive woman at the end as she was in the beginning. Perhaps the changes were subtle. The most obvious changes occur in McBride as he lets go of his past and with his children as they both become more settled under Bertie’s direction. (She plays the most perfect governess, knowing when lessons should be had and when fun should be had. That might be irritating to some)

The romantic tension simmers on low for a while and I was glad for that because I wasn’t ready for the two to consummate their relationship in part because I wanted to see McBride be fully into Bertie when the physical relationship commenced.

An underlying suspense thread wends through the book as someone threatens to reveal McBride’s secrets and there are many returning characters, some that I remembered and some that I did not. Hart is still stern and stuffy and Ian is still mysterious. If Bertie was a bit too perfect, I didn’t mind but I do wish McBride was a more vibrant character. B-

As a side note, this book takes place before Daniel’s book.

→ Jane
Previous article: REVIEW: The Masked Songbird by Emmie Mears
Next Post: Daily Deals: A couple of DA recommends and an intriguing inspirational