When I saw you’d published a new historical romance, Ruined by Moonlight, I downloaded the ARC. I’ve read quite a few of your books since your print debut An Indecent Proposition (Jane liked it less than I did.) and enjoyed several. (Let’s agree not to discuss One Whisper Away.) When your books work for me, they do so because the chemistry between your lovers is smoking, your plot has a twist I didn’t see coming, and–and I really like this about your books–there are two love stories each of which is engaging.

In Ruined by Moonlight, the first love story is between a rake and a virgin who wake up together, barely dressed, with no idea where they are or how they got there. Lady Elena Morrow and Viscount Andrews have never met although Elena has of course heard of the notorious Raven.

Doing her best to stay calm, Elena tried to think, incredulously recognizing the infamously handsome features of Randolph Raine, Lord Andrews. It wasn’t as if they actually knew each other—he hadn’t even asked to be introduced to her this season, and if he had done so her mother would have probably fainted dead away—but it was impossible to be part of the beau monde and not know of him.

He was the reigning rake of the ton, his reputation more wicked than sin itself, his name a byword for seduction and forbidden pleasure. 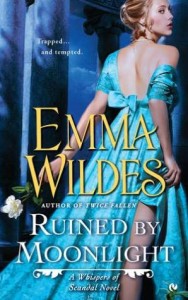 Lord Andrews–Ran–is equally appalled when he awakes. He and a virginal Lord’s daughter are locked in a room that contains virtually no furniture other than a bed, their clothes are missing, and their situation beyond compromising. He and Elena sort out that neither has trapped the other and thus they have been set up for some purpose neither of them can fathom. Armed servants eventually bring them food and drink but refuse to free or enlighten them. It becomes clear first to Ran and then to Elena that someone has trapped them together with the hope Ran will “persuade her to spend that time in the way men and women had been entertaining each other since the beginning of the human race.”

That’s one love story and even though the set-up is hokey and the prose pretty purple, I was hooked. I wanted to know who kidnapped Elena and Ran.

So, of course, does Elena’s father, Lord Whitbridge, and he turns to Lord Heathton–Ben–who was recommended by Wellington. (Ben, now trying to retire, worked in intelligence for the War Office.) Ben’s wife, Alicia, is Elena’s cousin and between the pressure from Wellington and the need to aid his wife’s family, Ben agrees to try to find Elena. He isn’t crazy about taking this job. He’s trying to run his estate and deal with a startling new problem of his own: his wife of six months has kicked him out of her bed, telling him they need to get to know each other better. Ben is, at first, flummoxed by her demands, and yet he concedes–to himself–she has a point.

A part of him was furious because he’d done his best, ever since the day he’d sat down and coolly arranged the marriage with her father, to have exactly the kind of relationship with his wife that he’d always envisioned once he sacrificed his bachelorhood to duty.

He wished to live his life, and she was free, within limits, of course, to live hers. She appeared on his arm at certain functions, oversaw the menus and other aspects of the household, and though it hadn’t happened yet, she would bear his children. All very civilized, all very much in his control, and nicely ordered.

He’d never expected to be blackmailed.

It was unsettling to realize a small part of him, a completely foreign facet he didn’t recognize, was intrigued at this sudden show of independence. Alicia had always been biddable enough, acquiescing to his decisions without argument, always the gracious hostess and dutiful wife. In bed it was much the same. She allowed him to touch her as he wished and never refused him unless it was an inconvenient time of the month. And when he left her for his own chamber she never failed to sweetly bid him good night.

However, if he was painfully honest with himself, her submissiveness gave him an uncertainty about whether she even enjoyed his attentions. He hadn’t realized it bothered him until now, when he found himself gazing at her from across the room, his mind only remotely registering the question she’d just asked him.

This story rocked. Alicia and Ben are a captivating couple, both smart and determined to get what they want. Their interactions are witty, romantic, and, as the book progresses, very sexy. The two take their time and each step that leads back to their marital bed is full of lovely tension.

“I’m no longer an uncertain bride,” she said for his ears alone as she clasped his fingers, lifting her silk skirts in her other hand.

“I think you have made that quite clear.” He was obviously amused. “However, you might not be as sophisticated as you think.”

Her very fear. Still, it was best to brazen it out since she’d come this far. “If not, it is up to you to educate me, my lord.”

“An intriguing proposition. This has been a somewhat trying evening so far, but unless I am mistaken you have just offered me an opportunity to vastly improve it.”

One way Ben and Alicia grow closer is by working together to figure out what’s happened to Elena. As Ben spends time with his wife, he realizes she’s just as intelligent as he is and possesses skills–like cleverly chatting up others to glean information–he doesn’t have. They make a great team; I enjoyed watching them become the couple Alicia is determined they can be. The two become equals and their partnership really worked for me.

The relationship between Elena and Ran is not as engaging, though still fun to read. Ran and Elena weren’t as interesting in part because they are far more stereotypical characters. Elena is breathtakingly beautiful; Ran is gorgeous and a stud. Given their situation–not only their near naked proximity, but the likelihood that Elena is inherently ruined–the two decide let Ran teach Elena about seduction. I feel like I’ve read that trope a bazillion times and while it’s reasonably done here, it wasn’t especially riveting. I did like the way the two didn’t spend all their time exploring Elena’s silken skin–they talk, play games, and become, sorta, friends. These non-sexual interactions provide some balance to all the time they spend “educating” Elena.

As for the question of who kidnapped Ran and Elena and why, I liked all the steps leading to the answer better than the answer itself. The identity of the mastermind was a bit hard to believe; even less likely was the odd story about how the kidnapping was engineered. I can see why you resolved your story this way; Ruined by Midnight is the first in your new series, Whispers of Scandal, and it’s clear the stories will be linked by how these scandals are engendered.

Ruined by Midnight worked for me. It was diverting, sexy–although the language used to describe much of Elena’s and Ran’s sensual escapades is often over the top–, and, until the very end, pleasantly mysterious. I liked Alicia’s and Ben’s story very much–I think they’re your best couple yet. The book gets a B- from me.

P.S. There is one odd continuity error in your book. At one point, Ran says his mother died of a wasting disease which caused his father to then die of a broken heart. Later, he says they were killed in a carriage accident. Given that it made no difference in the novel how they died, I ignored this disconnect. Still, it seemed sloppy.

→ Dabney
Previous article: Debut Print Book: The Trouble with Cowboys by Melissa Cutler (and Giveaway)
Next Post: REVIEW and GIVEAWAY: The Shadowy Horses by Susanna Kearsley