I’ve read that Americans are more interested in British royal weddings than the Brits. Well, the bloom might be off the rose for me after watching Chuck + Di and Andrew + Fergie make hashes of their marriages but I do wish the latest young royal and his bride better luck. At least they’ve got some examples of what not to do. Anyway, when Harlequin announced a series of novellas involving past royal weddings as a way to celebrate this new one, I took a look.

I cherry picked 3 of the possible 7 short stories. The ones I skipped were mainly because some of the blurbs made it sound as if the story concentrated on royal couples I knew ultimately had terrible marriages. 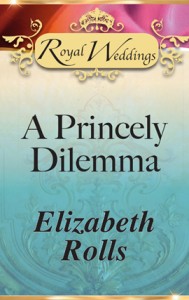 The Prince of Wales detests his German bride to be Princess Caroline and it’s up to the newly married Duke and Duchess of Severn to coax them both into behaving like adults instead of spoiled brats. The problem is that the Duke and Duchess are also in an arranged marriage which isn’t going well. Will they discover love amidst the royal feuding?

I enjoyed the humor in this one. The hero, Severn, and Malmesbury discussing Prinny (who I couldn’t help but picture as REG had played him). “He is fat.” Also the Beaulieu family dinner party is a hoot with Severn’s firecracker sister and brother in law taking the piss out of the overbearing and condescending Dowager Duchess for Linnet.

I’m afraid though that I didn’t really get what Severn saw in Linnet – yes, he loves her little drab bird self but why? We know she’s sweet but he didn’t seem to know a great deal about her beyond that she reads. That she knows several languages has escaped him as well as what her real name is. It was an “all of a sudden” he’s in lurve and mega hot for her bod type thing. I thought they were the sweetest couple but I wanted to see more beyond his physical attraction to her. B- 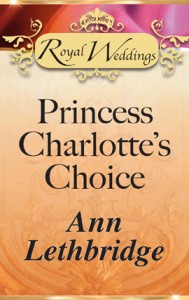 Prinny’s daughter Princess Charlotte is hoping to marry Prince Leopold. Charlotte’s lady in waiting Lady Isabelle is hoping to avoid Leopold’s boon companion Count Nikkolae Grazinsky who sweet talked Isabelle into falling for him two years ago then walked away. Can he convince her of his true and honorable intentions?

It’s nice to learn something about poor Princess Charlotte and her beloved Leopold even if I knew the tragic end that story would lead to. Isabelle and Nikki – again it’s insta love. Isabelle gives her heart to Nikki then the Big Mis rears its ugly head and she doesn’t get that he walks away because he’s poor. Of course he never says anything either so why should she? Then they meet and she thinks he’s mocking her so she seeks him out, in the stable by herself, to tell him to leave her alone. Is she worried about her rep which she says he already damaged? Apparently not. I’m as appalled as Nikki and wondering where her wits are. Then he does the strong arm thing and totally arranges her future without a by-your-leave. Shades of Barbara Cartland here. C

The Problem with Josephine – Lucy Ashford 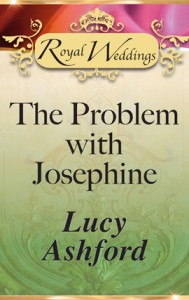 Seamstress Sophie is on a mission. She needs to find a painter to redo the scattered images of divorced former Empress Josephine as Napoleon prepares for his gala marriage to Marie-Louise of Austria. Rakish painter Jacques agrees but for the price of one kiss for each hour he works. Will they find love amidst the paint fumes?

I’m amazed at the number of romance tropes that make into this short, short story. Let’s see, there’s the heroine who must valiantly and at the last minute cover for daddy’s failings and shortsightedness in not using the money given to him to fix these paintings but rather spending it on other restorations. The prim heroine falls for and gives it up to a poor starving artist for the proverbial one night of love. Of course hero is actually someone in disguise. Oh, why can’t we have a real poor starving artist hero? Of course heroine knows he’s a rake, practiced flirt, charmer but she can’t help busting out of her buttoned up persona as she swoons from his masterful kisses. True love in 7 evenings and marriage to an aristo? Sure, why not. C-

The short stories are easy to read, quick little aperitifs. But while aperitifs are fine when you know the main courses are still to come, here they did leave me wanting. There’s too much reliance on quick tropes and easy plot short cuts. However with the limited word count, that’s probably the best I could expect and though the price is lower than regular books, it’s still a little high for what I got.