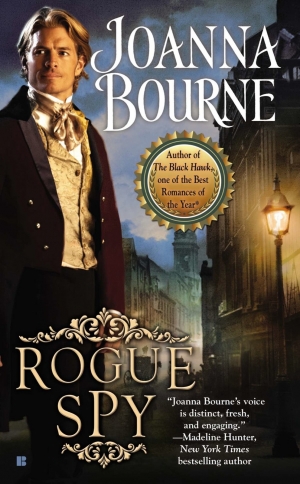 I know you can be overwhelmed, and you can be underwhelmed, but can you ever just be whelmed? (10 Things I Hate About You)

A few days ago something very exciting happened: I was finally able to access the US edition of Rogue Spy. I had no intention of buying the much pricier UK version, but given this opportunity, of course I had to grab your latest historical romance. Was I rewarded for my long wait? (3 years since your previous book + the 3 extra months) The best answer I can give is “sort of”.

Rogue Spy picks up one of the storylines from your previous novel, The Black Hawk (anyone who has not read that book should be aware that the rest of this review contains spoilers). There, it was revealed that the French secret police had run a brutal training program aimed at turning children into spies. The children, known as Cachés, would then take the place of British children supposedly lost in France and even elsewhere during the revolution and the Terror, allowing them to infiltrate different levels of British society and become valuable assets over time. The actual children and in some cases entire families were murdered to facilitate this. At the age of fourteen, Thomas Paxton was put in a position that allowed him to be accepted at the British Intelligence Service headquarters, but he soon decided that his loyalties lay with Britain rather than France. A decade later, his friend and colleague Adrian figures out that Pax is one of the Cachés, and he is given the opportunity to escape – but decides instead to turn himself in and confess all. At the beginning of Rogue Spy, Pax is returning to London to deal with the fallout from his confession.

Before we catch up with Pax, however, there’s Camille “Cami” Leyland, who has some serious problems of her own. Cami was also one of the Cachés, and her talent for code-breaking led to her placement with her “aunts”, who are responsible for the codes used by the British Service. She has never actually worked for the French secret police, but unfortunately for Cami, someone has decided to blackmail her: hand over the most recent top-secret code, or have the true Camille (who was only mostly dead, as it turns out) be produced, which would reveal Cami’s identity and shorten her life expectancy considerably. Cami takes off for London to deal with her blackmailer and draw attention away from the aunts, whom she has come to love and respect.

Now that I think of it, I can accept that one child could be successfully placed with the British Service, but two orphaned children, showing up all on their own, within what seems to be months of each other – it doesn’t make much sense that the higher ups in the Service weren’t a bit more suspicious. That the French secret police would give up on its well-trained child spies might be a bit more believable, given all that was going on in 1790s France.

Anyway, back to the story. In London, Pax is on his way in to headquarters when he notices Cami having a letter delivered there. When the letter appears to be highly suspicious, he is able to track her to the church where she is to meet with the blackmailer. Cami and Pax recognize each other immediately: they trained together, and Pax, the leader among the Cachés, befriended Cami, who was the youngest and smallest of the children. This shared past presents complications for both of them, especially once Pax recognizes the blackmailer – a shadowy figure known as The Merchant, who was involved in the Caché program and who has long been presumed dead. Pax would certainly like for The Merchant to be dead, with a marked preference for killing the man himself. Cami wants to figure out what the man knows, what he’s plotting, and if the woman he holds is the true Camille, she wants to restore her to the aunts. Meanwhile, many other people with many other agendas have their own ideas about how to deal with the situation.

There’s a lot going on in terms of the plot, which is something I’ve come to expect from your books. I’ve read on your blog how much work you put into your plotting, and it shows – because not only does Rogue Spy have a lot going on, it also fits with the larger story of your spy series and actually takes place at the same time as The Spymaster’s Lady. If there are any continuity issues, I could not spot them. I was very impressed that you managed to pull that off, given all the characters and subplots involved.

I also expect to enjoy your writing, and I wasn’t disappointed. The world you’ve created, in your previous books and in this one, is very vivid. You have a way of describing even mundane things in interesting and unusual ways, and ones that fit the characters and their backgrounds. Pax, for instance, is an artist, and his attention to form and color is apparent.

Cami and Pax are smart, well-trained and capable. Each respects the other’s abilities, and knows that the other can best them if the occasion calls for it – though they would much rather work together. Their attraction develops quickly, but it’s also grounded in their past friendship and mutual respect. Readers fond of virgin heroes in their romance reading should be pleased: Cami has had a couple of (disappointing) lovers, while Pax has chosen to remain celibate, for reasons revealed later in the novel.

(With all this in mind, the cover seems appropriate. Model-Pax hasn’t had his head chopped off and he’s wearing all his clothes. I am sure that Pax would never run shirtless around London.)

There were quite a few things that worked for me, but in the end I didn’t like Rogue Spy as much as I’d hoped – the same thing that happened to me when I read The Black Hawk. I’ve been trying to figure out why. One problem is the integration of the past and the present: The Black Hawk had extended sections set in the past while Rogue Spy only references past events, but in both cases, a lot of the relationship happened before the present time of the story, while the present was devoted to a large extent to the spy stuff. The spy stuff is integral to what you write, but I feel that it’s possible to strike a better balance between that and the development of the relationship between your adult characters.

The other problem, especially here, is that there’s a lot about what Cami and Pax are (spies, dangerous, lethal, Cachés), but I am not sure I got a strong sense of who they are. Cami is a talented codebreaker, and a member of a notorious Tuscan crime family, the Baldonis. The Baldoni family is spread all over Europe and is known by everyone in the novel, but as a child Cami nevertheless ended up on her own in Paris, believing that they had turned their backs on her. Soon after she fell into the hands of the secret police. Cami’s Baldoni identity is heavily played up throughout the novel – Baldoni sayings, Baldoni training, later on Baldoni relatives, etc. I grew tired of all things Baldoni pretty quickly. Pax, meanwhile, can make himself go unnoticed, but he can also be an inspiring figure: he is described as a leader as both a child and as an adult, but I felt that a lot of that came from telling about his exploits rather than what happens within the plot.

In the end, this was a beautifully crafted and written story about two characters who never felt fully fleshed out to me. There are so many layers to these two, and I felt as though some of them weren’t explored as much as they could have been. Maybe it was appropriate for two spies to remain somewhat enigmatic, but I’d have liked to get to know Cami and Pax as people more than I did as spies, and I think I would have been more invested in their relationship if that had been the case.

So I guess I’m whelmed. Which means that Rogue Spy gets a B-.