REVIEW: Rock and a Hard Place by Jane Davitt,Alexa Snow

I enjoy your contemporary romance collaborations and was interested to see how you would approach an enemies-to-lovers story, especially one with the added twist of an unexpected deserted island interlude. While the romance didn’t entirely convince me, I found the cast of characters were fun to spend a few hours with and I liked the way you played with some standard m/m tropes. 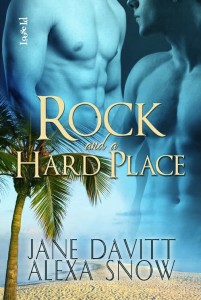 Sean Darrow and Andrew Carney are coworkers, competitors, and mutual thorns in each other’s sides. Andrew is the son of the investment firm’s owner and Sean is one of their top employees and aspiring junior partners. Sean is gay, out, and comfortable with it. Andrew is closeted, brings beards to company social functions, and doesn’t think he’ll ever be able to be his true self without disappointing his parents, whom he loves even more than he fears. And they hate each other. Not a manufactured, fake kind of dislike that propels the storyline, but full-on loathing. Even for the good of the company they often find themselves unable to resist going on the attack. Andrew’s father, fed up with his best employee and his son nearly sabotaging the firm again, sends them off on a luxury vacation to the Maldives to work out their differences.

On their way to the resort they encounter bad weather and their plane crashes into the sea. Unable to find the pilot, Sean and Andrew paddle their life raft to a small island, where they scrabble to survive, hope to be rescued, and find themselves appreciating each other. A lot.

The scenes on the island are really well done. Fruit does not fall from the trees, there are no handy fire starters left by the previous inhabitants, fish do not commit suicide and cook themselves, and there is sand everywhere. I could feel these guys struggling to survive and their fear that they would never be found. They keep arguing and fighting, but they have to rely on each other and they start listening rather than just talking and shouting.

What felt like hours of fishing time eventually resulted in him catching only two small fish, and his mood was lower than it had been when he trooped back to find Andrew. His spirits lifted as he smelled something new—wood smoke!—and he increased his pace, the loose sand shifting under his feet as he broke into a jog.

“Fire!” Andrew said as Sean joined him. He smiled sheepishly. “I know, pretty obvious, but still.”

“Told you it would work if you put some effort into it,” Sean said with a grin of his own. “Good job.” Despite his hunger and the knowledge the fish wouldn’t do much to assuage it, seeing the small but carefully tended fire made him hopeful again.

“I started with new sticks. They were the driest ones I could find, like, really old. I thought maybe last time they were still a tiny bit damp or something, and it worked!” Andrew was obviously elated, his high spirits infectious enough that Sean began to see why Andrew had so many friends. When his charm was turned on full, it was irresistible. Andrew reached out and patted the back of Sean’s calf with what seemed suspiciously like affection.

“Not great,” Sean admitted and held up the fish for Andrew to see. “But at least we can eat them cooked this time around.”

“When we get back, I am never, ever eating anything raw again,” Andrew said with a shudder. “Not even an apple.”

“Yeah, you will. Just give it a decade or so. Start small with blueberries; work your way up to pineapple.”

I don’t think it’s a spoiler to say that they are indeed rescued, because this happens halfway through the book. Once they get back to their normal lives, their fragile trust and affection starts to fray, but their attraction and desire for each other is still intense. This leads to an unfortunate deployment of what Roger Ebert has termed the Idiot Plot: If the characters don’t behave like idiots the story can’t progress. In this case the Idiot is Andrew; he is convinced his parents will be shamed and destroyed if he reveals his homosexuality, but since he never brings up the possibility he doesn’t actually know.

So the attraction and the sex sizzles, but it can’t go anywhere unless Sean and Andrew can work out a path forward. This is a romance, so they eventually do. But getting to HEA is exhausting for everyone, including the reader. It says a lot about the skill and persuasive abilities of the authors that even at the end, I’m not really convinced they are going to be able to sustain the HEA, although maybe they are just the gay Bickersons and what I find tiring they find enjoyable and rejuvenating. It’s certainly possible.

The supporting characters and the family relationships are well portrayed and fun to read. Andrew’s female friends are sketched sympathetically and the treatment of their female colleague, while somewhat depressing, is believable. I didn’t buy the nouveau riche v. arriviste conflict, in part because I never saw Andrew’s family as particularly haute in their depiction, but that’s a minor niggle.

The sex is plentiful and hot, although it verges on stock m/m at times (they think a lot about lube). But the sex scenes are not gratuitous; to the contrary, they advance the plot, the relationship, and the character development.

I don’t seek out desert island stories, but I had a good time reading this one. I am definitely a fan of opposites-attract setups, and while this pushes right up to the boundary of credibility, I went with it while I was immersed in their story.