REVIEW: Ride with Me by Ruthie Knox

I received a number of recommendations for this story and the recommenders were correct.  Ride with Me was right up my alley.  It was a well paced, contemporary featuring a non clingy heroine and a caretaker hero set on a bike ride across America.  The only downside was that Tom, in particular, came off as contrived in certain places. 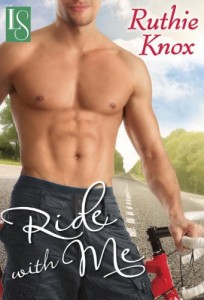 Lexie Marshall has planned on riding the TransAmerica bike ride for years. This was the year she would ride with her brother until he had to drop out.  Using Craigslist, Lexie looks for a riding partner.  After being turned down repeatedly after finding the respondents discover she is female, Lexie strikes up an email conversation with Tom Geiger using the handle “Alex”.  The two agree to meet in Astoria Oregon to start the trip.

Only Tom was actually Tom’s sister, the only member of his family that still spoke to him, pretending to be Tom.  The real Tom wants nothing to do with another a person and he certainly doesn’t need a riding buddy. (Say the term as a curse word to get a real sense of how Tom feels). He reminds his sister that he is the serial killer on the road, not the target of one.

“I don’t need a babysitter.”

“Please, Tom. You can’t ride your bicycle across the country alone. It’s insane. You’ll end up being slaughtered by a serial killer.”

“Okay, point taken. But you could get hit by a car and bleed to death by the side of the road.”

“How would riding with another person prevent that?”

“It wouldn’t, but he could call me on his cell phone so you could tell me you love me with your dying breath.”

Lexie is supposed to be the romantic and Tom the pragmatist, but in truth, Tom is really the romantic whose idealism was crushed.  Lexie’s romanticism stems mostly out of nostalgia. Her parents met and fell in love on the same bike ride decades earlier.

Tom realizes that he can’t allow Lexie to bike by herself and commits to riding along until he can find a replacement.  In the beginning of the story Tom was portrayed as Angry Antisocial Tom but as the story unfolded and the readers needed to get to know Tom better, Tom transformed into talkative, social Tom. This transformation wasn’t natural and it made his anti social behavior seem like a construct rather than his personality.  Angry Antisocial Tom provided a bit of comic relief and the right amount of sexual tension and conflict in the beginning.   In the beginning, Lexie felt lucky to wrench a two syllable “mmm-hmmm” from Tom.  Later, however, Tom has no problem carrying on conversations with other bike enthusiasts and even waitresses (even though he once derides Lexie for this).  The characters, both of them, failed to maintain a certain consistency, mutating according to what the plot called for.  For instance, Lexie hooks up with a very easy going, attractive young man at one point. He’s very friendly to the point that he can’t take a no and virtually assaults Lexie. I never felt like this was true to the young man’s character but it provided a leaping point for Tom to play protector.

That said, this is a genuinely enjoyable story.  Neither Tom nor Lexie are perfect individuals.  Tom withdrew from society, in part, because of something that happened in his past.  Something that he did that could be viewed as both heroic and cowardly.  Lexie, for all her good cheer and friendliness, often has an unkind thought about her fellow bikers. (I was rather repelled by her describing another rider as “gross” because he was “huffing and puffing like a steam train” but at least she wasn’t a perfect maiden from a Disney movie).

The story takes you from one side of the U.S. to the other and I loved the descriptions of the country as seen by Tom and Lexie. It was one of the things about the book that really surprised me. I am not much of a biker or traveler and worried that this aspect of the story would be boring but it is not. Instead, there is a true love for both that is expressed in the narrative. I never found it boring and it made me want to travel that same route.

This was why she was riding her bike across the country. Not for the miles, not to see the towns, not even to meet the people. Just this. The rain, the wind, the hill, and her legs powering her up toward the summit.

When she crested the top, she didn’t even stop. The rain had slowed, and she was craving the descent. She worked up a little speed, bent over the handlebars, tucked her body into a crouch, and let her hands off the brakes. Inside of a minute, she was flying, her bike computer clocking upward of thirty miles an hour. Her front tire pulled water off the road to wet her cheeks, while the rear threw a spray of wet grit up the center of her back. It didn’t matter. Below her, the Camas Prairie stretched out for miles, the intense bright yellow of rapeseed set off by purple-blue patches of camas flowers. She could see forever, and forever was breathtaking.

The dialogue and internal monologues are fun, peppered with a dry wit. “Lexie wasn’t the type of person who would do well in isolation, even with a really hot hermit who could kiss like Tom.” Even the sex scenes were often infused with mild humor:

Tom brushed his stubbled cheek over the sensitive skin along the side of her neck, which made her shivery. “You have to understand, this is just a typical day I’m talking about. I could fill a book with all the fantasies you’ve inspired in Missouri alone.”

One minor note. Lexie pretends to be married and she carries the deception on fairly long. Tom acts as honorably as possible and often wishes that her husband would appear and quench Tom’s inconvenient lust for Lexie. I wish Lexie had given up the ghost earlier.  I also wondered why Lexie, who loves riding her bike so much, didn’t join a bike club. I had a very hard time believing that there was no one in the Pacific Northwest that shared her outdoor enthusiasm.

What is even more enjoyable beyond the scenery is watching the two characters who really do not like each other at the beginning of the story fall in love. Their intimacy grows, almost grudgingly, over the course of their trip.  They both need to rely on each other from time to time and the long days and nights result in sharing of their hearts before their bodies.  And when they engage physically, it is built upon a foundation of personal admiration.  My guess is that fans of Kristan Higgins would enjoy this book.  B-

→ Jane
Previous article: REVIEW: The Darkest Seduction by Gena Showalter
Next Post: Master of the Universe versus Fifty Shades by E.L James Comparison