I’d looked forward to reading Rescue My Heart, the third in your Animal Magnetism series.  I enjoyed the first two books in the series and was ready to learn Adam’s and Holly’s story. I liked Rescue My Heart, although I struggled a bit in the beginning with the characterizations of Adam and Holly. 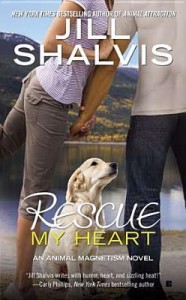 In the first two books in the series, Adam is a significant character; he seemed significantly different in those books than he does in this one. In the earlier books, Adam comes across as fairly emotionally open, at least to those he cares for: his brothers, Dell and Brady, their women (this is how they are referred to) Jade and Lilah, and his mother, Nila. He’s the strong and silent type, but you can tell he’s got the backs of those he loves. Yet, in Rescue My Heart, his mantra is he’s so damaged he can’t really be there for anyone. It’s a mantra that doesn’t ring especially true. I’m guessing it’s women he can’t be there for, specifically women who are interested in a romantic/sexual relationship with him. It’s not so much that Adam is a completely different person in this book but rather, since this book focuses on his love life, he’s a completely different man in that arena than he is in the rest of his life.

Holly has had cameo appearances in the first two books and she really comes across differently in this book too. So much so I had a hard time reconciling the Holly from books one and two with this Holly. In the first two books, Holly is presented as a pain in the ass. She seems haughty, demanding, and kinda bitchy. Yet, from the moment she appears in this book, she’s a likable character. I’m sure if I’d not read the first two book, I wouldn’t have been so disconcerted  by the change in her persona. I’d wondered in the first two books what on earth Adam saw in her–it’s been clear from the beginning she’s destined to be, in his book, his woman. It took me a couple of chapters to cast aside Holly v.1 and replace her with the kinder, gentler Holly v.2.

Once I got past my confusion over how Adam and Holly were portrayed in this book, I enjoyed them as a couple.

When Holly was eighteen she and Adam had a hot and heavy thing. Back then, Adam was, according to him, “a complete fuck-up,” wild and stupid. Holly was a rich rancher’s only daughter and she’d fallen hard for bad boy Adam. He was her first love and her first lover. But one night, when Adam was out drag racing with his friends, a cop chasing them drove off the highway and died. Holly’s dad (and Adam’s boss), clueless about Holly’s and Adam’s relationship, suggested that Adam join the military and get his act cleaned up. Adam enlisted and broke Holly’s heart by dumping her when he left.

Adam could still remember facing Holly after he’d enlisted, looking into her achingly blue eyes, torn by what he felt for her and what he would become if he stayed.

Out of some sense of obligatory self-flagellation, he’d gone about cutting everything good out of his life before he left. He’d told Holly not to wait for him, that he wouldn’t be coming back. That she needed to move on.

Somehow, over the next twelve years–despite Adam staying close friends with her brother Griffin–Adam and Holly haven’t seen much of each other. Holly married and moved to New York and then, a year ago, sans husband, moved back to Sunshine, Idaho (the town in which these books are set) to help her father run his ranching empire. Adam stayed in the military until two years ago when a mission he was on in Afghanistan went to hell. Now he’s in Sunshine, working as a Search and Rescue trainer, and struggling to overcome his PTSD.

As far as Adam knows, Holly hates him–that’s the bitchy Holly v.1–and thus he is surprised when she shows up at his door and asks for his help. Holly’s convinced her sixty-five year old dad, Donald, is missing and she wants Adam, the best tracker she knows, to help her go find him. Adam is pretty sure Donald’s probably fine, but there’s a mega-storm about to hit the Bitterroot Mountains and he can tell Holly is genuinely afraid for her dad. Adam agrees to help her and says he’ll leave in the morning–alone–but Holly makes sure she’s along for the trip by sneaking into the back of Adam’s ATV.

Most of the book takes place while Adam and Holly are driving around the mountains, in the storm, looking for Donald. As they drive, they talk, discuss their pasts, and lust madly for one another. Holly still maintains Adam shouldn’t have left her; Adam tells her–and himself–again and again he did the right thing because he’s not good enough for her.

He could satisfy her physically, but no matter if he wanted to the One for her or not, he’d let her down because he couldn’t keep her satisfied emotionally.

I didn’t understand why Adam is so sure he isn’t good enough for Holly. He and Dell both had hard knock childhoods–their mother put them in foster care when they were young and they had some pretty rough placements. But Adam’s in his early thirties now, he’s incredible with animals, saves people’s lives regularly, and is a good friend to many–including Holly’s dad. It’s so clear he’s a great guy–all his self-bashing made me a little nuts.

For her part, Holly never got over Adam. After he dumped her, she went to college and married her professor whom, she discovered several years into their marriage, was cheating on her with his TA’s. She left that loser–she’s waiting for their divorce to be finalized–but the experience made her wary of relationships.

The two don’t find Donald the first day they’re out searching and–big surprise–have to spend the night together out in the wild. This one night together takes up three chapters of the book–twenty-five pages–and is the highlight of the book. Adam and Holly both desperately want to touch each other, but they have so much baggage, in their shared past and in the issues they are struggling with in the present. The sexual tension between them is acute and they fight the inevitable with humor, anger, distance, and even a rolled up jacket. By the time they give in, they are both about to go up in flames.

His hand caressed along her cheek and wove its way into her hair at the back of her neck. Tilting her head up, he waited until she met his eyes, the air crackling with tension. “Are we going to stop?” he asked, voice thrillingly strained, chasing another shiver up her spine.

He held her gaze for a long beat while he seemed to wrestle with his own inner battle. Finally he leaned forward and brushed his lips to hers.

Her low moan gave him the access he needed and he deepened the kiss, his tongue stroking hers. She squirmed and wriggled, trying to get even closer. He rolled over her, never breaking the kiss as he cupped the back of her head, his thumbs stroking her throat.

She slid her hands beneath his shirt and over the smooth skin of his back, feeling the carefully leashed power of him beneath her fingertips. She wanted to unleash that power. She wanted that more than she wanted her next breath.

I liked all the sex scenes in this book–this one the best–because in all of them, Adam and Holly are passionate and wary. Sex doesn’t burn away their doubts–it’s just that the pull between is stronger than their fears. And Adam the lover is just one more Adam for Holly to fall in love with–she’s already in love with Adam, the boy from her past; Adam, the heroic warrior; Adam, the hot sex on a stick guy; and Adam, the good man who works to save the world one person and or animal at a time. I could completely see why Holly is so crazed for Adam.

I had a harder time seeing why Adam was so crazed for Holly. Yes, the two have smokin’ chemistry and yes, she’s the girl who got away. But she’s not very interesting–she’s so defined by the men in her life. Her father sent away the man she loved, she married a guy whose infidelity scarred her, and she’s been stuck on Adam for years. She’s pretty much the same woman at the end of the book she was at the beginning. Adam evolves–he makes real progress overcoming his PTSD and letting himself care for Holly. He’s more vital than Holly and thus more intriguing.

Still, even with its slightly mundane heroine, Rescue My Heart was an easy read–breezy, funny, and sexy. There isn’t much plot in the novel but that didn’t bother me–I liked that the story was so character focused. (In fact, I skimmed most of the whole “Where’s Donald?” story.) I wasn’t wild about Holly but I didn’t dislike her and she’s certainly not annoying. Adam is a hot, engaging hero and I enjoyed the chemistry and the dialogue between him and Holly. Readers who were entertained by Ms. Shalvis’s other Animal Attraction books will appreciate this one too. I give it a B-.