I think we all know the story of the unhappy teen that makes a wish for a better, bolder life… and then watches it come true. Many books, TV shows, and movies have been made about this very concept. We watch the teen enjoy their new and improved life, only to discover there are cracks. Not everything is as it seems, and some things have a price. Like I said, it’s a familiar story. Your novel, Relativity, takes this concept and instead of wishes, gives us string theory and alternate dimensions. 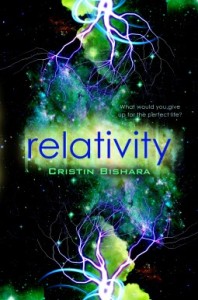 Ruby Wright has left her beloved San Francisco behind and relocated to Ennis, Ohio. She’s not thrilled by the move but she can’t do anything about it. Her father remarried and that’s where her new stepmother lives. Her stepmother, Willow, isn’t so bad but her new stepsister has some anger management issues.

After a confrontation with her stepsister, Ruby flees to a mysterious tree located behind her new home. The tree, as readers can guess, is hardly ordinary. First of all, there’s a door in the enormous trunk. Second, the doorknob zaps your hand when you touch it. Finally, the door opens to reveal a strange contraption inside the tree. And when the door is shut and the contraption’s wheel is spun, Ruby finds herself in various alternate dimensions where the details have changed, the circumstances are different, and her dead mother might be alive.

I adored Ruby. A math and science nerd! Who loves astronomy and physics! With an equation tattooed on the back of her neck! We don’t see enough of those in YA heroines. She was geeky and embraced it. She was never ashamed of her identity or wishing she was someone else or part of another social group.

It’s great that Willow isn’t portrayed as the evil stepmother but I wish Kandy, Ruby’s new stepsister, wasn’t so immediately manipulative and violent. While we later learn the reasons behind her behavior, it gives the impression that instead of an evil stepmother, we’ll be getting an evil stepsister.

I can understand Ruby’s desire to find a perfect reality. It’s such a temptation for teens, especially ones who experienced loss early in their childhood. Ruby’s mother died in a car accident when she was young so she missed out on many years and potential memories. When given the opportunity, I think it’s perfectly reasonable for Ruby to jump right on it.

The tree leads to ten potential realities with the first being the one Ruby started with and the last being a vaguely post-apocalyptic world in which no life can possibly exist. The other eight showed the many ways one small change can affect everything. What if Ruby’s mom survived? What if she had an older brother named Patrick? What if her parents divorced instead of her mother dying in a car accident, leaving her father a widower?

What I liked about the portrayal of the parallel universes is that some things carried over from one reality to the next. It appeals to the part of me that believes that some things hold constant. For example, there is George. In Ruby’s true reality, George is her best friend from San Francisco who she’s fallen in love with. She never told him the truth before she moved to Ohio because he used to date one of her friends and to confess shortly after they broke up would be awkward. In one alternate reality, George is a boy in her French class. In another, they’re already dating.

Relativity was a fast read but in some ways, it left me wanting more. More explanation about Kandy. More about George. While the first third-quarters of the book flowed well, the last quarter felt rushed to me. I get that time was running out for Ruby so she had to but given how much loving detail went into the previous alternate realities, it gave the impression that the ideas had petered out.

I’m also not too sure about the worldbuilding. I’m not talking about the tree that’s actually a wormhole. I can buy that. I’ve read and bought more ridiculous ideas, believe me. I’m just not sure I get the Irish connection. It seemed random and made me wonder if I was missing something.

While I wouldn’t call Relativity mind-blowingly original, the brainy heroine and concept of a wormhole tree drew me in. I consider this book more of a comfort read, but sometimes that’s exactly we need. B-