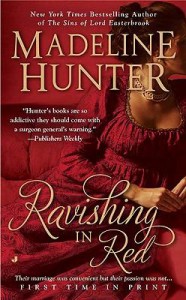 Ravishing in Red begins a set of stories about a home for beguines. As the book describes it, “They were common in medieval France. Lay-women would live together as we do. Some would take employment outside the walls, and none took vows, but they lived communally.” After the war, many women were left without fathers, fiances, and husbands, and without a viable support system. Banding together is one way for the women to live without placing unnecessary strains on their family and to retain a certain form of independence.

Audrianna came to live with her cousin Daphne, a purported widow with a small property, after Audrianna’s father killed himself upon being accused of allowing bad gunpowder to be used during the Penninsular War. There are four women that live there and they all contribute to the household funds. Audrianna sells songs but she also helps to garden and harvest the flowers for Daphne’s trade, The Rarest Blooms.

Audrianna is determined to clear her father’s name, post mortem. She reads a notice that asks for an assignation with her father and immediately believes that this will lead her to information that will exonerate her family name. Once there, however, she is confronted by Sebastien Summerhays who is also seeking to discover the source of this bad gunpowder. A gun goes off, winging Sebastien. Sebastien obtains Audrianna’s agreement that they will present this as some sort of lover’s tiff which will damn Audrianna’s reputation but keep her from being hauled away for attempted murder of a Marquess’ brother.

Eventually the scandal becomes so big that Sebastien is villified and there is nothing to do but to ask for Audrianna to marry him.

Sebastien was a very engaging hero. He dallied in all sorts of scandalous activities until his brother, the Marquess went off to war and returned paralyzed. Sebastien becomes the de facto leader of the family. He notes that his life is not his own anymore, but instead he lives a shared existence.

"The life you must share with your brother. It was the reason you gave me for the investigation. You named an uncomfortable truth."

"I did not mean that the two of you live one life."

"Then look again. I wield his influence. I have his power. I play the lord on his estates and I sit at his place at tables. I have molded my life and myself to this duty of standing in for him, but not replacing him. Had he died in the war, it would have been a more tragic reason to take his place, but the duty and role would have been a natural inheritance.”

Sebastien is not a brooding hero but one beset with guilt, anger, and resentment. He falls easily for Audrianna yet she does not seem to reciprocate his love, instead sharing her confidences and smiles with his brother and only her body with Sebastien. The brother relationship was also compelling with both brothers thinking that the other is so much more worthy.

I’ve written the most about Sebastien in this book because Audrianna was a pale bloom for me, if I can use the flower metaphor. Audrianna acted silly, trying to insert herself into dangerous places assuring Sebastien that she had a gun (even if she never could use it). The hard lines she drew in the sand were quickly smudged away by her own behaviors. In found her to be lackluster in the portrayal. My attention was riveted on Sebastien and the struggles he had to cope with his new life, his love for Audrianna, and his duty and devotion to his family and Audrianna felt like a placeholder. B-

This book can be purchased at Amazon, Kindle or in ebook format from other etailers.

→ Jane
Previous article: REVIEW: Eyton by Lynne Connolly
Next Post: Do authors have ethical responsibilities beyond the book?