REVIEW: Pursued by the Rogue by Kelly Hunter

JayneB- ReviewsContemporary / novella / NYC / second chance at loveComments Off on REVIEW: Pursued by the Rogue by Kelly Hunter 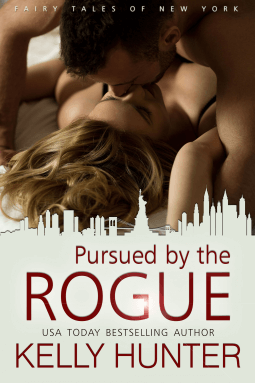 A no-strings affair between two dedicated professionals? It should have been the perfect solution.

Ugly duckling Dawn Turner doesn’t do relationships. She has her reasons and they’re good ones. But she can’t resist the magic in Finbar Sullivan’s touch, so she negotiates the next best thing with him. Scorchingly perfect, utterly casual sex.

World class musician Finnbar Sullivan always pushes the limits to get what he wants, and he wants Dawn. All of her. Love, commitment and a future together. So he reneges on the deal and composes a new one.

So what’s stopping her? And will Finn’s latest offer be enough to change Dawn’s mind?

I love the story of “The Ugly Duckling” and with your name on this novella, it was a no brainer to request and read it. Given that it’s the lead off book in the quartet, there is some backstory for the entire series but I didn’t find it intrusive to this story. I liked the characters and was delighted that the issues keeping them apart are real and important. What didn’t work so well was that I felt almost detached from emotional involvement until very late.

Dawn is the outsider to the group of 4 teenagers who become friends at school. She’s also the outsider to her family though she isn’t told the full reason for why this happened until after the prologue. With what she finds out and the interest in genetics, her given profession and way to become a millionaire is timely and believable. Having read a little bit about her father’s disease, her choice to be genetically tested is sound and her decision to wait a bit can also be understood. It also explains her choice in relationships both for the implications for any future and because of how her mother dealt with her over her father.

Since she felt rejected by her nearest and dearest during a critical stage in her life and as she’s always felt physically undesirable, pulling inward and being reluctant to open herself to rejection makes perfect sense. When handsome Finn seeks her out, I can see why she’d want a moment of being desired but also why she’d cut herself off and deal with what happens alone.

Finn describes his continued interest in Dawn to his sister in a way that explains it and ties in with his musical background. He finds her like a fascinating piece of music that he’s compelled to want to learn and play. From the first, he saw in her a person he wants and who remains as beautiful as she was 10 years ago. It was chemistry but also something more and deeper. When he feels that the chemistry is still there, her cool insistence on a “just fabulous sex and no strings” relationship startles him. He’s also sure from the start that he won’t be able to abide by it. It’s fun to see the man being the one to push for more but that almost goes without saying given the title.

But as I continued to read, I still felt detached. Finally at around the 3/4 mark, I got involved but with a scene between Dawn, her mother and her aunt. I like her aunt. These are true strong women. After that the emotions continue to pour and Finn’s public performance of his feelings of grief and regret at something Dawn told him had me fully onboard and reaching for the tissues. Yes, the ending is very powerful, wrenching and ultimately sweet but it was a wade through “not bad” before I got there. B-