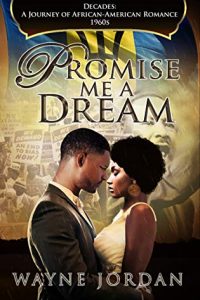 Chandra Williams’s dream of becoming an actress carries her from her home on Barbados to the bright lights of Broadway. But it’s the 1960s, and her goal of gracing the stage is obstructed by the limited opportunities for black actresses. Driven to help end discrimination and inequality, Chandra joins the Civil Rights movement.

Joel Donovan doesn’t understand the need for the Civil Rights movement. His life of privilege has sheltered him from the struggles of the black community. However, he’s intrigued by the courage and commitment of the beautiful immigrant from Barbados. Their attraction is immediate and powerful, and Joel is persuaded to join the movement.

When their efforts result in Joel’s freedom being challenged, Chandra gives him her unwavering support, but can their growing love survive the racial tensions and conflicts of the times?

I’m slowly working my way through this series, Decades – A Journey of African American Romance, and am happy that you regained your health and could finish this addition to it. While the backdrop of the novella is about the Civil Rights Movement and the assassination of Dr. Martin Luther King, the focus is on the different life experiences that Joel and Chandra have had and what those mean to how they view the struggle for equal rights for Black people.

Joel’s parents have raised him with privileges that have insulated him from the general experiences that most Black people live with. An immigrant from Barbados, Chandra has moved to NYC to pursue her acting dream. When the two meet, it’s soon obvious that they feel a deep connection. But even as Chandra spreads her acting wings because of an introduction that Joel arranges, Joel is finally faced with prejudice and danger due to his skin color.

This is a low key romantic relationship story. Joel has been raised to treat women with respect, Chandra is a good judge of character, her mother trusts her, and the quick realization that they love each other takes away most of any conflict that might have been there. It’s pretty much just Joel and Chandra getting to know each other and getting along.

A quick opportunity at an acting contract falls in Chandra’s lap. The most intense part of the story centers on what happens to Joel and how this will change his outlook on life and galvanize his future. I felt that the inclusion of Joel and his friend in the events in Memphis in April of 1968 was realistic without trying to be too much. The epilogue neatly wraps things up and lets Joel meet Chandra’s Nana whom I adored.

Unfortunately, since this is a novella with a lot happening, some things weren’t covered in depth. I wish that most of the flashbacks had been swapped out for more time spent in 1968 and there had been a bit more that Joel and Chandra had to negotiate on their way to a HEA. It does leave the reader with things to think about and I hope that Joel’s friend will eventually get his story told. B-