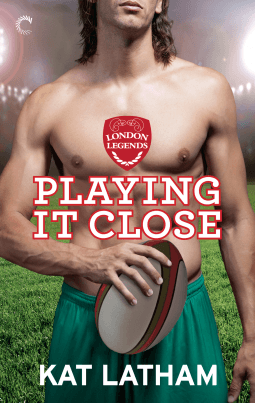 “Where do you go to escape everything when you’re one of the most famous rugby players in the world? For Liam Callaghan, that place is a remote lodge on Venezuela’s Caribbean coast. Perfect, except he doesn’t exactly want to be alone with his thoughts. Enter Tess Chambers, the ultimate distraction.

Still reeling from a professional disaster that’s made her all but unemployable, Tess understands the desire to move through life as somebody else. So when instantly recognizable Liam uses a fake name, she runs with it and creates a temporary new identity of her own.

Their time spent together in paradise is idyllic but brief—after one passionate night, Liam wakes up to find Tess gone. Returning to London, he’s shocked to learn she’s taken a job with his team’s new sponsor. As the Legends’ captain, he’ll have to not only figure out how to work with the one woman who ever left him wanting more, but also convince her that their feelings in the present mean more than any lies they’ve told in the past.”

I’ve been eagerly waiting for this follow up to one of my favorite books of last year – Knowing the Score. That book was a fresh and funny introduction for me to the sport of rugby, a great hero and heroine and your writing. I haunted the Carina Press website for the past 2 months watching for “Playing it Close” and pounced on it when I finally saw it offered. Well, while I sped through the story, it didn’t match up to my hopeful expectations.

The book starts with a standard romance trope meet-cute, hookup and then separation followed by the “never expected reunion” which leads to the “thrown together professionally while sparks, which must be ignored, fly” finished up by the “Big Mis” and finally the “all is explained and true love wins out.” This is all fine, well and good, the characters are nice and unexceptional, the set up is believable if uninspiring but honestly it’s nothing I’ve not read before many times. If this were all it would have been a pleasant enough read but nothing special.

But as I read, a series of things began to stand out to me that I found harder to stomach. I don’t care for situations that in some way belittle or humiliate the heroine but here the stakes were raised even higher. Tess has endured public slut shaming because of her assholic coworkers in The City’s financial district. She struck back with an anonymous blog that Told All which lead to hearings on the gender issues running rampant in her workplace. Her former employer then hit back by releasing a drunken email she sent to one of her tormentors causing her further public embarrassment. In other words, Tess has already been put through the wringer.

So what happens to her over the course of the book? She gets caught by Liam in an elevator looking like an escapee from a wet T-shirt contest. She gets caught in a shower with nothing but a wash cloth and her hand to protect her naked dignity from the gaze of 12 of the London Legends rugby players, then she’s required to serve as a body double for a team calendar photo shoot after listening to the photographer denigrate her looks. And finally after having rejected Liam publicly, she feels she has to make it up to him by publicly apologizing. One of these events I could have tolerated but as the number of them piled on I began to get upset. They were no longer cute or endearing ways to catch Liam’s attention. Tess had suffered enough, in my opinion.

There are things about it that lift it back up for me. Tess wants a new job for her own peace of mind and won’t be satisfied to sit back and live off the hush money she got from her old job. Working and being productive are important to her. Liam cooks! Brava to Tess for getting it through to Liam that the word “girl” should not be used as an insult. Liam realizes early on that his relationship with Tess is different from all his past hookups. Good for Liam in explaining to Tess that if she wants implants that’s fine but he loves her body as it is. And I adored the short dinner scene at Spencer’s house and getting to see that crew again.

Overall it’s okay but just not up to how much lurve I have for the first book. Granted the bar was set high with that one. I can appreciate that you didn’t just write the same book as before or plagiarize your own characters and just give the new ones different names but this one didn’t quite hit the same high note. Pretty please for the next book can we have a hero who is one of the small but scrappy, fast and mean as a hornet rugby players? B-/C+