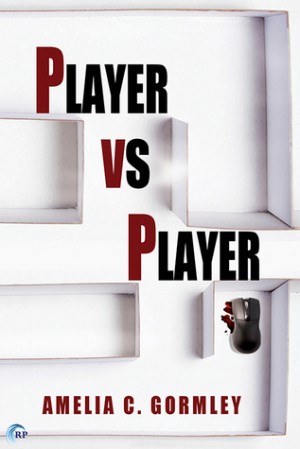 There is way too much ugly drama in the news, so I have to have a good reason to read romantic suspense these days. A story about misogyny and homophobia in online gaming was a really good reason.

Niles Rivers has a dream job, writing stories for role playing games that strive to incorporate feminism and diversity. The one ugly fly in the ointment is the online harassment that he and his boss, Rosie, often experience. When the threatening messages get too close to home, Niles’s twin Jordan (yes, you saw that… Niles and Jordan Rivers) persuades him to report it to the police, bringing him face to face with his old flame, homicide detective Tim Wyatt, for the first time in seven years.

The set-up between Niles and Tim was new to me, and I found it appealingly fresh. Tim had broken off their college affair to marry his high school girlfriend, cravenly claiming to have just been experimenting with Niles. Niles is astonished to discover that Tim is now divorced, completely out, and thrilled to see him again. He’s pretty dubious about giving Tim a second chance, but when two young cosplayers of Niles’s game are murdered, it becomes necessary for him to help Tim with the investigation.

I found this hard to get into at first; the messages come on strong and fast, and it felt pretty preachy. But I suspected that my own internalized misogyny might be getting in my way and decided to stick with it. (Interestingly, while writing this review I started an m/f New Adult romance which contains a very similar scene to one in Player vs. Player: a man steps in to help when a woman is being harassed by another man, and she’s angry with him about interfering. The first scene read uncomfortably to me, while the one in the NA probably would have seemed like standard romantic meet-cute if I’d read it first.)

My reward for moving out of my comfort zone was that this developed into a very readable story with some real nail-biting moments. As is often the case with romantic suspense, the romance is fairly light and ends with a happy for now. (And a warning for those who demand strict fidelity from the moment the characters meet: Niles is also involved with someone else during the book.) The sex scenes are also pretty light — barely there for the most part — although the language used is explicit.

I’d say Niles’s most significant relationship is actually with his twin, and it’s sweet to see a portrayal of brothers so physically affectionate with each other:

“…now everyone is side-eyeing everyone else, we’ve got people with guns in the office, and all the camaraderie is gone. That’s not what I helped Rose build. That’s not the world I want to live in.”
“It’s the only world we’ve got right now, bro.” Jordan’s arms came around him, and he turned to hug his brother tightly. “We’ll stop whoever is doing this, whoever is hurting people, and then you can help Rosie pick up the pieces of what’s left and build the world you want again.”

(After all the brotherly love, I was bummed by a tease of incest at the end; I think the idea was that they were making fun of the hot twins stereotype, but I wished it hadn’t gone there.)

The characterizations are fairly thin, and I sometimes felt the suspense plot wasn’t given as much attention as it needed; it’s hard to explain what I mean without spoilers, but there’s one ugly plot point which should have created a great deal of tension and urgency in Niles and Tim, but instead is pretty much dropped. There’s also quite a lot of information about online role playing games, which some readers might find hard to follow. On the other hand, there wasn’t much in the way of “as you know, Bob,” and as a newbie, I enjoyed reading about the creative aspects of the games and how they play out.

And as you would hope, the cast of characters is exceptionally diverse, in terms of race, gender and sexuality: I don’t think there was one cis-het white male in a major role. This is done with a fairly light hand — a casual mention that Rosie knew her lawyer Eliza back when she went by Elijah, for example — which supports the idea that the book is just reflecting the fact that the world is a diverse place. At a few  points,  I was concerned that some readers might feel Tim exoticizes Niles, who has a Turkish mother and an apparently white British father, but that may well be over analyzing on my part. (It’s the sort of book that inspires such analysis.)

This definitely had its share of flaws, but I both appreciated what it was attempting to accomplish and found myself very caught up in the story. Pretty cool when an author can pull off both. B-