I have an uneasy relationship with steampunk. I want to like the genre, but I feel like the label has become so dilute as to be useless. It seems like anything featuring corsets, parasols, tea, and goggles gets labelled steampunk these days. Sure, there’s usually a mention of a flying dirigible but really? Is that all it takes? I was under the impression things like that were called gaslight fantasy! But I’m stubborn and I keep trying. I was first introduced to Ms. Ballantine’s work under the Philippa Ballantine name with the novel, Geist, when it first came out. That book didn’t work for me and ended up being an DNF, but poking around her website led me to a forthcoming steampunk series called the Ministry of Peculiar Occurrences, of which Phoenix Rising is the first novel. 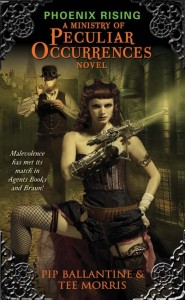 The Ministry of Peculiar Occurrences is a secret organization of the Crown, charged with the task of investigating and dealing with the strange and unexplained. Eliza Braun is one of its very talented field agents. Unfortunately, she’s prone to making rash and reckless decisions while in the field, which often results in many explosions. Since the Ministry is meant to be a secret organization, loud and enormous explosions tend to make that task more difficult.

Eliza’s latest rash decision took place during the rescue of fellow Ministry employee, Wellington Books, the organization’s Archivist. Books was abducted and on the verge of being tortured for information when Eliza came to his rescue. Her orders were to kill him, due to the fear of his being compromised. As the Archivist, Books knows many of the Ministry’s secrets and should any of that information be made available to their numerous enemies, disaster would be sure to follow. But instead of carrying out her orders, Eliza senses that the worst has not yet come to pass and instead chooses to rescue him from the isolated Antarctic base. But not without some impressive fireworks.

Books is ecstatic to be rescued. Eliza, however, has to face the consequences. As punishment for her constant string of “rash” decisions, she is reassigned from the field to the Archives, where she is to work as Books’s assistant. This pleases neither of them. Eliza would rather be in the field, and Books quickly realizes that his new partner has no interest in the Archives and is, in fact, a disaster waiting to happen. All that changes when they stumble across the files of a cold case, one that once had belonged to Eliza and her former partner, who nows lives within the walls of an asylum.

First of all, I must commend you both on writing a steampunk that actually makes use of steampunk! It’s not just goggles here. Eliza is very fond of various gadgets (that make things explode) and Books makes use of various machinery to make his tasks in the Archives run more smoothly. Although, as the case with most forms of technology, sometimes the machinery just makes his life more complicated by malfunctioning. There are airships, of course, but people actually ride them, not just mention them in a cursory manner. The worldbuilding wasn’t in-depth or detailed but it was enough to convince me that this was a steampunk world well beyond the gaslight stage.

The plot also moved along at a fast clip with lots of action. Since I’ve been reading lots of YA lately and by its nature, that genre tends to be introspective due to the coming of age themes, this was a welcome change of pace. I do like a good action adventure story and Phoenix Rising certainly delivered on that score. It contains many of the staples that you’d expect from this setting: asylums, secret societies, shady bars, crowded London streets. While nothing was necessarily original, the familiarity of those elements are comforting.

The downside of the action plot is that the characters suffer. I did like Eliza’s headstrong, rash personality just as I liked Books’s stuffy demeanor. But even as we delve into Eliza’s relationship — professional and otherwise — with her former partner and skirt the mysteries of Books’s past and what brought him to the Ministry’s employ, we don’t really see much of a character arc. Phoenix Rising is very much an “odd partners coming to an understanding” type of narrative and while that aspect reaches a satisfactory conclusion, the individual characters of Eliza and Books don’t undergo much of a transformation. This is probably the book’s biggest weakness. I’m willing to be forgiving in this area, however, because I thought the plot made up for it and I assume that we’ll learn more in future books.

I also appreciated the fact that Britain’s imperialistic tendencies during this time period were not glossed over. Eliza hails from the British colony of New Zealand and it continually comes up throughout the book — from the co-worker who makes snide comments about the sheep stereotype or from Books who notes that a certain type of British citizen would consider Eliza no better than the dirt beneath their shoes. Eliza is indeed an agent of the crown, but she hasn’t given up her New Zealand roots as witnessed by the pistols she bears.

While the character arcs could have been stronger, I thought the action adventure plot was fun. In fantasy, we often swing between two extremes: the very lighthearted and the very serious. It was nice to read a book that was fun and had its serious moments but never completely descended into the grim and dark. The protagonists’ names are Braun (Brawn) and Books, after all. I’m looking forward to the further adventures of Braun and Books so I have to give Phoenix Rising a B-.