REVIEW: Passion and Pleasure in London by Melody Thomas

Your books remind me acutely how much of the relationship between reader and book depends on some chemical, perhaps even alchemical, reaction, indescribable yet potent in its effect. They also remind me of how possible it is, even now, for a compelling storyteller to make stock characters and situations come to life. Which is what I found to be the case in Passion and Pleasure in London, a book that once again blends romance and intrigue in a satisfying, albeit not thoroughly original way. 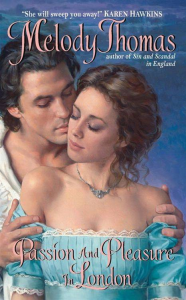 Winter Ashburn is a thief, a petty thief for the most part, but a thief nonetheless. She is also a lady by birth, granddaughter of a duke, her father long dead following a horrific accident, her mother suffering from some form of dementia, and her younger brother fully in her care. Winter’s uncle, Baron Richly, has given her a small cottage, leaving her to her own independence in the wake of an incident eight years ago that set in motion both her father’s death and Winter’s larcenous behavior. An in-between existence is what Winter leads, not destitute but hardly flush, not disrespectable but still outside the society into which she was born. It is no wonder, then, that when she spots the half-English, half-Rom Rory Jameson, a man whose dark beauty matches his brooding manner, she is drawn to him, recognizing a strange kinship with the stranger.

Rory is similar to Winter in a number of ways. The grandson of a nobleman, the Marquess of Granbury, he has lived the life as an outsider – his Gypsy mother consistently derided and his disgraced father killed trying to defend her. Like Winter he has taken a different path in life than the one he was born to, a solitary path, as it happens. But now Rory is on his way to Granbury Court, summoned finally by his dying grandfather to assume his inherited position, and despite his resistance, his distrust, and his resentment toward the family who rejected his own parents, Rory finds himself wending toward a home he has never known, never expected, but that has always been intended for him. When he spots Winter in a local pub, he is instantly on alert; when he finds her going through his saddlebags, he is revealed as that time-honored combination of alpha maleness: anger and arousal. One forbidden kiss in the stable and an attempt on Rory’s life later, Winter and Rory find themselves irrevocably snared in a complicated mix of attraction and mystery.

Not everyone is thrilled with Rory’s appearance at Granbury Court, especially his cousin Trevor, who had hoped to become the marquess’ heir, Baron Richly, to whom the old marquess had indebted himself quite extensively, and Richly’s daughter Lavinia, who is contractually betrothed to the marquess’ heir. There is also some distrust among the those in the shire, who have suffered under Granbury Court’s mismanagement and are still uncertain of who burned to the ground Winter’s former home, Everleigh Hall, some years earlier. It is unclear who is behind the attempt on Rory’s life and their motive, but Rory’s extensive military and government experience (yes, he’s one of those heroes) tells him that the attack was not the random robbery it appeared to be, making him distrustful of practically everyone. And while he initially distrusts Winter, especially when he wakes to find her standing over his sick bed (following the attack) and assumes she is trying to kill him, he soon realizes that she presents a different sort of danger, the peril of excessive feelings.

Neither Winter nor Rory is lighthearted, neither is perfectly honest, neither is wholly forthcoming with the details of their life, but both have a basic integrity and loyalty that overrides their superficial deviousness and wariness of each other. Both have suffered a great wrong at the hands of family, both are essentially orphans (although Rory has a sister, Eve, with whom he’s close, and Winter has her brother and others in the shire who look after her), both have taken on too much responsibility at too early of an age, and both have guarded their hearts jealously despite their passionate natures. In other words, they are a perfect, brooding, Romance match.

I do not think the strength of this book is reflected in its basic characterization and plot, because so much of that detail comes across as derivative. For me the strength of the book is expressed in the emotional spark between Rory and Winter and the way the novel makes the most of their characters to develop that passion. At one point Winter tells Rory, “‘I have never known a person to touch as much as you do, my lord,'” to which Rory aptly replies, “‘And I have never known a woman who needs to be touched as much as you do.'” This exchange communicates perfectly the nature of Rory and Winter’s relationship – their mutual need for connection and the way it pushes and pulls at them, driving them to ever-deeper levels of physical and emotional intimacy:

She had never known anyone like him before. The man might be a scapegrace, but he did not seem overset by his faults. She envied his acceptance of himself. Never before had anyone made her so aware of her own body and feelings. Or made her feel so alive and unafraid. . . .

“I will not be a trophy,” she said. “The prize for a game won between us.”

“Is that what all of this is about?” he quietly asked.

“I don’t know. I only know is that I am all tight inside. Like I’ve been caught in an apple press. I can’t even seduce you properly, and you’re the easiest man I know.” . . .

He knelt and combed the hair out of her face. “Look at me, Winter.”

“You are seducing me, love.”

One of the things I like most about Rory and Winter is that they are not wincers and mincers; for the most part they say what they mean and they mean what they say, neither disposed to whining, self-pity, or cruel pettiness. Rory, for example, has many reasons to despise his grandfather, and yet his response to the marquess and to the prospect of taking on the title himself is not what I expected (it is deeper and more thoughtful). Winter, who is very aware of her growing feelings for Rory, is nonetheless not moved to besotted manipulation or stupidity. In fact, there is an honesty in both characters, in their portrayal and the way they function in the novel, that is compelling enough to push my sympathies past their superficial type-ness and make me care about them.

There are also a number of secondary characters in the novel who manage to contribute to the emotional authenticity of the central relationship, namely Angelique Kincaid, who becomes a much-needed friend to Winter and who challenges Winter to take new stock of past relationships. Rory’s sister Eve, who, like her brother, is strong and practical, also provides some help along the way, intervening in Rory’s relationship with Winter just enough to keep things from flying off the track and providing some much needed clarity to Winter. The ostensible villain of the book, Baron Richly, is not portrayed with a great deal of subtlety, but the effects of his greed and ambition reverberate through the novel in sometimes effective ways (especially in the economic challenges he creates for Granbury and the way that affects Rory). As was the case in the last novel, Sin and Scandal in England, there is still a fair amount of purple prose, especially during the love scenes, but I found it less frustrating in this book, in part, I think, because Rory and Winter were better suited to the linguistic intensity and also because it seemed less intrusive and less prevalent this time around. Also, I found myself negotiating fewer typographical errors in this ARC, which likely relieved my general crankiness in also navigating through the sometimes melodramatic prose.

The biggest disappointment in the book for me was the mystery plot, which had much more dominance in the last book than here. One thing I enjoyed about the mystery plot in the last book was the way it broke some of the romantic tension and provided a nice layering to the grossly overused spy Romance tropes. In Passion and Pleasure in London there is less emphasis on the spy stuff, but also a weakening in the strength of the mystery, which in this case revolves around the attempted murder of Rory. The resolution to this mystery, which was intended to tie a number of the novel’s elements together, was not particularly satisfactory for me. The reasons for this – which I will attempt to convey without giving away spoilers – are related to the characterization of the main culprit, which I found inconsistent (why didn’t anyone see it before?), the motive of one of the secondary culprits (this person’s involvement past a certain point was never explained), and the way this resolution invoked another Romance trope that frankly diminished the importance of some of the financial/economic issues that had been developing during the novel. I did, however, appreciate the way in which one of the would-be villains actually revised some of the presuppositions that predicated the initial attempt on Rory’s life. Had this character been nuanced a bit more, the mystery subplot might have been stronger and more effective in its unraveling.

Overall, though, I found Passion and Pleasure in London a compulsively readable book. As with the last book, I am somewhat torn between a C+ and a B-, but since I am still feeling fondly toward the book several weeks after reading it, its strengths are obviously enduring in my recollection beyond its weaknesses, so I will go with the B-.