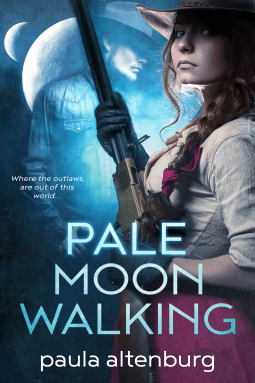 Where the outlaws are out of this world…

US Marshall Sam Kyote has been sent to the dry old town of Coyote Bluff to recuperate from a top-secret government experiment that’s left this law man a little…well, different. But Sam’s about to find out that the town of Coyote Bluff has a whole lot of secrets. Most of which lead to Libby Mayden-the sexy, long-legged, and tight-lipped sheriff who saved his ass from an alien ambush.

The last thing Libby needs is a US Marshall poking around her town, especially one who’s hotter than the Nevada desert sun. She can’t let Sam find out most of her town are wanted outlaws. Between the aliens, the gunfighters, and a searing sexual attraction to Sam, she’s in a whole heap of trouble. And Libby’ll stride both sides of the law-and Sam-until she’s forced to choose between self-preservation…and her heart.

When you mentioned this book on our recent Author Promotion post, I hustled to get myself a copy. This year I’ve been reading a lot more SFR than I ever have and most of it has been set on Earth – but contemporary Earth. Here we’re talking the wild west of the 19th century.

I thought it might be a mix of Wild, Wild West (the TV series) and Cowboys and Aliens. Maybe. But no, that expectation didn’t pan out. Sam does have new powers (he doesn’t want and didn’t realize could be done to him – legally too since he signed up for the Special Division Branch) and is only told about them after being secretly given them. “Hi. We’re from the Government and we’re here to help you” taken to mad lengths. Now he has to worry about the ruthless gov’mint officials (some things just never change even in SF) being after him and can he trust anyone, including the man who is ostensibly saying he’s trying to help him? Oh, and there are aliens on Earth now. Just to add to the fun.

Libby Mayden is no shrinking violet. Five men, who tried to see if she was as good a shot as her outlaw father had bragged she was, found out she was better. She enjoys guns and loves a good gunfight. It gets her adrenaline going. But as she discovers when she goes to assist her new neighbor – strange things are happening, again. Her instincts also tell her behind his gentlemanly manners, he’s hiding something and given what happened to her five years ago, Libby goes with her instincts.

So the possibly bad Sky People are there with the definitely shady government official and they’re onto Sam and wondering about Libby. Sounds like things are about to heat up – and I’m not talking about the weather. Characters – at least those in Coyote Bluff – just pop off the page. Colorful without being corny or silly. Immediately memorable. And since it’s a small town in a territory not full of people, everyone knows everyone’s business and feels free to chime in. I enjoyed how much Libby cares about the town and people she’s responsible for.

Libby is not one of these types of women who will wait around their whole lives for a man, much less a perfect one. Surprise, surprise, surprise! Sam finds himself confused when his first attempt at seduction falters and has to think quickly to change Libby’s objections to his standard proposal. She makes him work for it. However Sam likes tall, independent women so he’s not going to give up. The start of their courtship is a funny twist on the “romance during danger” trope. As Sam tells her, “It’s not just any girl I take to a gunfight.” He also acknowledges she’s a much better shot than he is. It’s another twist on trope that he’s from the stable parental marriage while she isn’t and needs to be persuaded.

At first clues about the mysterious beings and past events are revealed at a steady rate that keeps my interest up without annoying me at being teased with no payoff. Then this part of the plot seems to fade into the background except for a few brief mentions here and there to remind me it’s SF as well as a romance. More time seems spent on the Coyote Bluffs baseball game and what the townspeople think of Libby and Sam’s courtship than about the Sky People and why they’re so interested in Libby and Sam. I also wondered what effect the mysterious nanoparticles injected into Sam’s blood and the changes they had on him might be passed on to children, not that Sam or Libby appear too bothered by this.

As a romance, this worked for me. Sam and Libby are great people who fit together like hand in glove. Sam’s heartfelt declaration of love is sweet and moving and he takes the time to address all Libby’s hesitations. Coyote Bluffs is a great little out of the way town, a place where former outlaws can retire and you can raise your children. The SF part though …. that seemed to fizzle. Is this the finale? Will the Sky People show up again? What long term effects will there be for Sam? It’s sort of like a “Raiders of the Lost Ark” end/non-end. I was kind of hoping for a more definitive closure. B-