REVIEW: One Thousand and One Nights by Ruth Browne

This debut short story has a voice that grabbed me — moody and beautiful and intriguing. The story itself left me going “huh?” at times, but the more I think about it, the more I appreciate it. 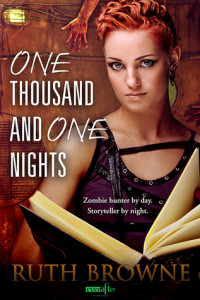 Five years after a zombie plague ended the world as we know it, Sheri cautiously hunts through a library — not in search of food or shelter, but of stories. Named (or so she says) after Shahrizad from “The One Thousand and One Nights,” she’s always been a natural storyteller, fond of seducing men with words as well as actions. Now that talent is what’s keeping her alive, whenever she returns “home” to one of the last compounds of living human beings:

The yellow stars had shone down on her where she lounged with her shotgun cradled under her arm. And yet she had come back to this, to humiliation and hatred, for the sake of a sister, a safe place, and the sound of human voices.

Sheri was bitten by zombies but hasn’t turned — yet. Although every other bitten person has turned almost instantly, to the frightened people of the compound, she’s always a “yet.” (It doesn’t help that she’s got some unusual symptoms, and is careful to never eat meat.) And so for her sister’s sake she willingly lives there in chains, released only for hunting missions. Her life is at the whim of the compound’s leader, Aleksy, who can’t bring himself to give up her stories — or her:

When the woman sat cross-legged with a book cradled in her lap, caressing him with her voice, he knew he was selfish and weak. When he watched her slip her fingers under the collar to ease it away from her throat, he imagined her touch on his skin, and fought the mingled desire and revulsion that came over him. She was so strong, and so human: a huntress in the land of the dead, with a beautiful soul that turned every one of her fairytales into something rare and precious.

Like Aleksy, I found Sheri fascinating. Daughter of a murdered Iranian activist, she and her little sister Dani grew up in foster-care, but she’s always gone her own way — labeled a boy chaser, a delinquent, a bad example, a bookworm. She was strong enough to take care of both of them throughout the plague but her sexual desires, as well as Dani’s loneliness, convinced her to join the compound — mistakenly thinking that her bite wound would heal before it was discovered.

I haven’t read a lot of zombie fiction, so I don’t have much basis for comparison, but I thought this world was vividly imagined:

The air was fresh and cool, a nice change from musty paper and dead flesh. Since most people had stopped doing people things, the natural world had grown vast and loud. Over the rustle of grass and leaves, crickets sang under a sky full of stars.

As a romance though, I had some issues with it. It’s certainly romantic in parts; I especially liked it when Alex turns turns their usual dynamic around by telling Sheri a story: “Warmer than the blankets piled on top of her, more spellbinding than the siren song of sleep, his voice captivated her in a way that no dog-collars, cuffs, or chains ever could.”

But their relationship is kinky in a way I couldn’t quite get a handle on. Alex seems to be doing more than simply keeping Sheri restrained — he sometimes deliberately hurts her, then he regrets it. At one point he spanks her during a sex scene, with dubious consent. Just before that happens, he thinks this:

Of course Sheri liked to be in control. Even chained to the wall in handcuffs she had played games with him, King this and Lord that. Gently biting down, he remembered the first day she’d mockingly addressed him as Prince Charming; he’d been so angry at her for using his obsession against him, but as he was bending and binding her into a bow he had recognized his own selfish lust, and fled before he could be tempted to consummate it. Like Joseph from Potiphar’s wife, if she’d been into BDSM.  Since then, the thought of her tied up near to him while he slept had become a torment.

This reference perturbed me. It puts the onus of the situation on Sheri, classing her as a temptress and the one in control, when during the time he’s thinking about she was physically very much in his power and he was essentially torturing her.

I never quite got what’s going on between them, aside from the fact that they’re obviously very into each other. Alex seems oddly skilled with restraints, though nothing we’re told about his romantic past indicates he was a practiced Dom. Are Sheri’s punishments deliberate bondage and sadism? If they develop a real relationship, is that going to carry over into it? (The spanking tends to indicate it will.)  Thinking about it, I suppose this kind of uncertainty makes sense, considering the tremendous uncertainty of everything else in these character’s lives.

But then right after things came to a head between them — suddenly the story was over. It does end on a strong note for Sheri, but I really needed more.

[spoiler]Alex has sex with Sheri, seemingly with no concerns at all about biting her or sharing body fluids. I guess this is supposed to show how completely he’s succumbed to her, but I found it kind of terrifying, since we still really don’t know if Shari might be a carrier of the plague. And with that, Sheri tells him that he can’t chain her up anymore and it’s HFN land.[/spoiler]

The confusion and disappointing ending have to bring my grade down some, but I applaud the willingness to tell a different kind of story; I do think this is a very promising debut and I’m looking forward to more. More specifically about this couple or this world might be ideal, especially since there’s unexplored potential in Sheri’s strange immunity. B -.