REVIEW: Once Beloved by Amara Royce

Last year I reviewed your historical romance, Always a Stranger. The book was interesting and different enough that when I saw you had a new romance listed on Netgalley, I requested it. 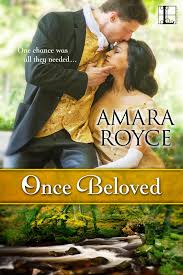 Once Beloved is the story of Helena Martin, a widow with three sons. Helena’s age isn’t given, but it’s been twenty years since she and her late husband married, so she is at least in her upper thirties, which is refreshing.

As the novel opens, Helena’s oldest, Bart, is away, serving in the navy, but her two younger sons, teenaged Mark and the much younger Tommy, along with Helena’s two friends, Marissa and Honoria, accompany her to the Great Exhibition at the Crystal Palace.

The excursion is a difficult one for Helena to undertake. Since her husband Isaiah’s death two years before, Helena has been afraid of crowded places, but now she braves the Crystal Palace for the sake of her boys. Once there, the throng proves to be too much for Helena, and she passes out.

Also at the Crystal Palace that day is Daniel Lanfield, a sheep farmer who has come to London from the village of Marksby to find buyers for his wool. Daniel witnesses Helena’s collapse, and he catches her in his arms and assists her.

But Daniel and Helena share a past, and although Daniel does not immediately recognize Helena as the girl to whom his brother was once engaged, and whose elopement with another man devastated their community, Helena recognizes him. Once the introductions are made, Daniel recoils from her.

Days later, Daniel runs into Marissa’s husband and is invited to his home. While there, Daniel states that his wife “is gone,” without expounding. It is a true statement — Daniel’s wife has left him — but he is taken for a widower, when the reality is different.

Daniel also learns from Marissa that Helena intends to travel to Marksby. Though her late parents never patched the rift that followed Helena’s elopement, and Helena has therefore never returned to the village, Helena’s grandmother is now nearing death. After years of silence, the “grande dame” has written Helena and her sister Elizabeth so that she can see them again, and Helena is determined not to throw this chance at a reunion away.

An angry Daniel tries to dissuade Helena from this course. She’s done enough damage, he explains. Not just to his brother Gordon, but also to Marksby itself. Helena’s family’s land was supposed to be united with the Lanfields’ upon Helena’s marriage to Gordon, and a railway company had planned to purchase those lands. When Helena ran off with Isaiah, the railway company’s employee, the deal fell through, and with it, Marksby’s chance at economic prosperity.

Helena’s friends and sister also try to keep her from leaving, arguing that Helena is prone to panic attacks or fainting at the sight of a crowd, so how can she possibly travel on a packed coach or train?

But Helena will not be dissuaded. Even if she has to face the villagers’ censure, she will travel to Marksby and tend to her frail grandmother. Reluctantly, a still-angry Daniel offers to take Helena and her teenaged niece, Vanessa, who comes along in Elizabeth’s stead, in his wagon.

On the journey Helena and Daniel both become aware of their attraction, but neither is willing to concede the other’s points about the past. And when they arrive in the village, Helena encounters the villagers’ anger, while Daniel struggles to explain to Gordon how he could have brought Helena there.

Will Helena overcome the obstacles she faces in the village? Can Daniel let go of his anger over Helena’s abandonment of his brother? Can this couple find love despite past bitterness? And what about Daniel’s wife?

Once Beloved is the kind of romance I sometimes hear readers clamoring for, one with nuance and heart. The characters are adult and down to earth. Neither is an aristocrat, and both feel like real people.

Helena is alternately fragile and strong, but in a way that feels consistent. There’s a reason for a her fear of crowds (it got to me emotionally), as well as for her determination to soldier on despite the animosity she meets with in Marksby. Her friendship with Honoria and Marissa, her love for her boys and her grandmother, her happy first marriage, and her attraction to Daniel, define her as both loving and brave.

Though a sheep farmer, Daniel is a man with gentlemanly impulses, one who cannot abandon Helena to the dangers of public coach travel even at the height of his alienation from her. While his initial loyalty to his brother, whom Helena ran out on, is perfectly understandable, there were times when I found his anger at Helena a little hard to take. Ultimately though, his love for Helena came through, and he even came to some important realizations about his marriage. I liked that his wife, though an obstacle, was no cardboard villainess.

Still, if I have one major complaint to make it’s that I really wanted to see more of the enjoyable aspects of falling in love. There was so much tension between Helena and Daniel for so long, and because of Helena’s phobia and the villagers’ scorn, a strong sense of anxiety permeated much of the book. That’s not all bad, by any means – it kept me turning the pages — but a greater number of romantic moments would have balanced it better.

There is a leavening subplot about the teenaged Vanessa, who matures some during the visit to Marksby, and comes to see her life in London through different eyes. Vanessa’s growth was well-handled; there was just enough of it to be satisfying but not so much as to be unbelievable.

I took issue with some of the villagers’ attitude because when Helena eloped with Isaiah, she was unaware of the railway company’s plans to develop her parents’ and the Lanfields’ lands. While eloping would have been a big scandal even had the deal not fallen through, I didn’t think she should be held to blame for the fact that it did.

Helena and by extension Vanessa, her niece, both face some slut shaming from angry residents of Marksby. This felt true to the time period, and after reading so many nineteenth century historicals in which there are no consequences to premarital sex, it was both refreshing (due to the authenticity) and dismaying (since from my twenty-first century vantage point, Helena and Vanessa in no way deserved it).

Gordon, Daniel’s brother, also seethed with anger at Helena for much of the novel. Of all the characters in the book, Gordon may have been the most vivid. His fury was so palpable that there were times when it made me fear for Helena’s safety.

After all his rage, I just barely bought Gordon’s change of heart, and I could only do that because it wasn’t complete.

The rural setting is portrayed in a way that makes for a perfect example of how a nineteenth century England setting can be made to feel fresh even now. There’s a scene in which Daniel and his nephew round up a flock of sheep in a rainstorm that is unlike anything I have read in European historical romance. The novel made me feel as though I were visiting a real and specific time and place, not a wallpaper version of Victorian England.

The HEA in this novel was unconventional, especially for a historical. It worked for me, for the most part, though it also made me worry that Helena might face more censure down the road. She had been through enough that I didn’t want that for her, but at the same time, I appreciated how different this ending felt.

Once Beloved is a fresh, original, and authentic-feeling novel. B-/B.