The release of this book came upon me fast. I missed the time it was available on NetGalley so I scampered off to purchase it. The first one Protecting What’s His is still my favorite, but this entry is much better than the novella. 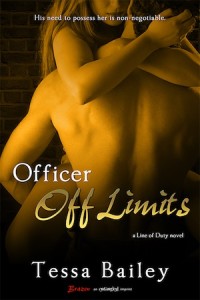 Story Brooks comes to New York City after a messy break up with her fiance and the sudden heart attack of her father, a famed hostage negotiator for the NYPD. In the hospital, she encounters Daniel Chase hitting on a nurse but Daniel quickly forgets about the nurse’s phone number he just obtained when he spots Story standing in front of the vending machines. I know that this is supposed to show us that Daniel is hot and in demand but I would have liked for Story to be a little more wary of a guy who picks up nurses and strangers, one after another, at a hospital after visiting his mentor, Jack Brooks.

But, no, their sexual attraction is too strong for Story to resist so when Daniel helps to show Story home she allows him sixty seconds to show her what he’s made of. Of course, Daniel rises to the challenge. Pun intended. What makes the story work for me, despite the offensiveness of Daniel’s first appearance, is the chemistry between the characters. It’s smoking hot.

Story deals with Daniel’s advances and her rocky relationship with her father Jack.  There’s also the creepy neighbor and her ex’s reappearance.  The plot is fairly predictable.  Story must decide whether she is going to stay in NYC to explore the relationship with Daniel and her father or return to her home back in California.  Creepy neighbor plays a role in pushing the couple together and making Story realize that time is fragile.

Despite my earlier complaints, Story isn’t a pushover. She suffers from some pangs of uncertainty and vulnerability as a result of her recent break up but she sees through Daniel’s posturing fairly well.  The banter between Story and Daniel is well done and the banter between Daniel and his friends is great.  The love scenes are extremely well done.  I particularly loved it when Story is signing karoake and wants Daniel to participate but he refuses until she makes him an offer he can’t refuse.  He doesn’t sing well. “After a long-suffering sigh, Daniel began to sing. Or tried to, at least. His voice came out sounding mostly flat and monotone, but it still counted.”

“Hell of a show. We could have charged at the door for that,” the bouncer commented with a wink as they passed. Daniel’s friends erupted into laughter again. Story turned her head into Daniel’s shoulder and groaned.

He frowned. “All right, all right. Has everybody gotten it out of their system?”

“Hell, no,” the bulky, dark-blond one said. Next to him, his familiar-looking friend shook his head. “You’ve got weeks of this coming,” the blond said. He reached a hand out toward Story. “You must be Story. We’ve heard so much about you.”

There is a good mix of humor and emotional drama.  The dialogue is snappy and the pace is great.  But the story takes place over one week and the love that the two express for each other comes off fairly shallow. If you don’t think about the book’s concept (or plot arc) hard, the read is quick, fun, and sexy.  B-