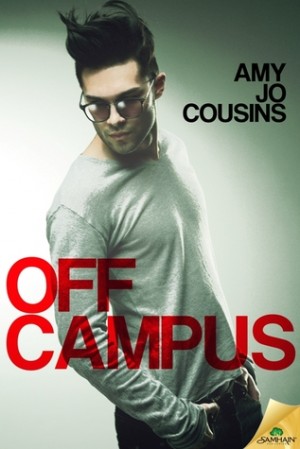 I recently read your free m/m short Five Dates and I was completely charmed by it.  I opened Off Campus immediately after finishing, hoping to find more of that, albeit with different characters. I did find things to like but it was not entirely the success the novella was.

My reading experience of Off Campus was disjointed.  In part that was because things are so busy at this time of the year and in part it was because the book didn’t always engage me so much that I pushed other things aside in order to keep reading.  In other words, I think my view of the book is a little diminished because of the interruptions – only some of which had anything to do with the book at all.

Part of the reason the novella captured my attention may well be something unique to good novellas – the action began straight away and there was little set up.  In full length novels, that’s often not the case.  It was perhaps a mistake to go straight from one to the other because I expect I imported some novella expectations to the novel.   After I mentally slapped myself a little, I reminded myself that I ought give the book some time to set the scene.

Tom Worthington III  has come back to Carlisle College, a prestigious university a few hours drive from Boston, to complete the final three semesters of his degree.  He has been away from college for the past year and a half because his wealthy father was investigated, arrested and then convicted of fraud (a Ponzi type scheme).  There is no money left.  All the assets have either been frozen or sold.  Tom, who never wanted for anything, has spent the past 18 months almost entirely in want.  He still has his car – which is a BMW worth quite a sum of money – and he uses it to “gypsy cab” (for those unfamiliar, this is a kind of unlicensed taxi service which, depending on where it happens may or may not be illegal and may or may not be something to which the authorities turn a blind eye).  I didn’t have to think too hard to realise that Tom had made good use of the car this way.  The value of the car to him in terms of his ability to earn an income was much greater than the value of it if he had merely sold it.  It was not entirely clear to me why he was allowed to keep the car and nothing else – I guess it was in his own name?   He has also been driving a regular cab and living in his car in order to raise the money to go back to Carlisle.  He wants to finish his education and be able to find a good job so he can support himself.  His focus is very narrow; go back to school, work to pay tuition fees and keep his head down.  He has been hounded by the paparazzi and angry investors and he has found that most of his former so-called friends were very willing to sell him out – literally – by selling photos or information to the gossip mags.

The college has given him a room in an off campus dorm so that he can keep a low profile. When he arrives, he finds that his room is not in fact a single, but that he will be sharing with Reese Anders.  Reese was also promised a single room.  Reese is horrified and terrified by the arrival of Tom.  Frankly, the reason the college mucked this up and any consequences as a result of it were completely let slide and it ended up being, for me, merely a reason to force the two men together.

Trigger Warning: sexual assault. Reese was promised a single room because he was sexually assaulted at the college the previous year.  I’d have liked for this to be addressed more fully.  The story was entirely from Tom’s (third person, past tense) POV and, given Reese’s backstory, this ended up being a problem for me. The assault isn’t lovingly described; there is no torture porn aspect to it.  In fact, I admit that I don’t think I understood the full extent of what happened to Reese because the description in the book was vague on details.  That’s not necessarily a complaint – I don’t want chapter and verse and I’m sure many other readers don’t either.  But Reese’s trauma recovery was done from a distance and through Tom’s lens and this was unsatisfactory for me.  I thought what happened to Reese was worse than what had happened to Tom. Not that what Tom went through was nothing – it wasn’t, but Reese had more of my sympathy.   I ended up feeling impatient for Tom to get on with it already and wanting more time spent with Reese.  I’m not sure I was supposed to feel that way.  (To his credit, Tom is not at all dismissive of the trauma Reese suffered and I didn’t get the impression that Tom rated his own trauma more highly – he did think it rated being in the mix and that was fair enough I thought.)

After a rocky start to their shared living arrangements, Reese and Tom develop a tentative friendship.  There is a growing attraction.  Tom is, or was, a “jock” and there are all kinds of triggers for Reese as a result, as well as the size difference between the two protagonists.  Tom is taller and broader and Reese is slim to the point of skinny and shorter.  Reese is openly gay and Tom is bisexual but has been mostly in denial about that.  I did like that there was discussion in the narrative that Tom did identify as bi and not merely as a way to bypass the “gay” tag.  He was genuinely attracted to men and women and I liked that it wasn’t erased in the story even though Tom wasn’t with any women during the course of the book. It is not a “gay for you” story as Tom had had same sex attraction before and acted upon it.  He just hadn’t considered it before in terms of his sexual identity.  Given his age and his circumstances, this made sense to me also.

In the end, the essential conflict between Reese and Tom was that Tom did not want to come out. He felt that being seen publicly dating Reese would only add to the drama surrounding him and give the gossip mills more fodder.  While I understood on one level, I became impatient with him over it.

He was a somewhat unreliable narrator and this led me to feel a little… betrayed at the end? (Betrayed is too strong a word but it was in the same family.) I wondered if his unreliability was to serve the plot rather than organic.  It did seem convenient to me.

When Reese and Tom were together I mostly enjoyed their banter and interaction. I liked how they slowly moved towards each other and I liked how Tom was careful, particularly with his size, to not be in a position where he could trigger Reese.

Some of the pacing in the book felt a little disjointed. There would be skips forward where things which were really important had happened but they were mentioned almost in passing. For example, at one point, there is a pivotal sex scene between the two men and then I was told that the previous week there had been a lot of tension between them and the black moment was looming.  It had the effect of making me question how the pivotal sex scene fit within that tension.  Because when I thought about it, it didn’t.

Reese’s best friend is Steph, a bisexual girl who was fiercely protective of Reese.  She had a snarky sense of humour and I liked her. Tom finds he has a friend who has stuck with him after all, in Cash, a fellow track teammate. Cash started off being a giant dork and a stereotypical jock.  He kept some of the dork but he developed into far more than a stereotype and in many ways he kind of stole the book for me.  I liked the friendship which developed between the four students.

I did like that Tom was determined to (and in the course of the book learned how to) take responsibility for himself. He recognised that he needed to make changes and they needed to be changes he chose and acted upon of his own volition and not merely because someone else desired them. I did believe in Tom’s and Reese’s happy ending because of that.

Some of the writing was beautiful.

He wouldn’t ask questions, invite more intimacy, but he could be silent at the right times. He could give Reese space in which to find his way closer to Tom, this strange dance they were doing—waltzing in the dark without a partner, wondering if each was ever going to bump into another lonely dancer.

In the end, Tom’s problems seemed relatively easily solved  and I was left wanting more about Reese.  I wanted to know more about how the college reacted to what happened and how he was doing and I’d have liked to know that from Reese himself.  I did like Reese and his dad’s relationship and I laughed when Reese told his dad off for using the term “cocksucker”.  I was convinced that  Tom and Reese were good for one another but I had a nagging disquiet that I can’t fully articulate about Reese’s backstory and how it was presented in the novel.

Overall however, I did like the story and I plan to read the next book – which is about a character who does not look good in this book so I will be interested to see how he is redeemed.

I was wavering between a C+ and a B- but I went with the higher grade because I know part of my reaction to the book was my own busy life which led to a somewhat disrupted read.

→ Kaetrin
Previous article: Wednesday News: The future of online shopping, increasing US literacy, literatures of Africa, and Orwell on empathy and fruit loaf
Next Post: Thursday News: A couple of 678562014 ‘best of’ lists, predictions for digital life in 2025, and a funny short film for New Year’s Day