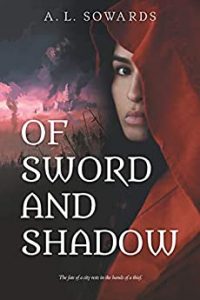 She is known by many names, none of them her own. In truth, she is an unnamed slave, nothing more than a weapon in the hands of her owner in his attempts to provoke political mayhem. When she encounters a handsome young man while on an assignment, she thinks little of him—until he attempts to take what she has stolen. But in her line of work, failure is not an option.

Gillen is intrigued by the mysterious woman who thwarts his mission. But when his path crosses hers again, his intrigue turns to gratitude as the thief he comes to call Eudocia saves his life. The two form a bond of friendship and join forces to wrest control from a group of ruthless rulers. But as their camaraderie blossoms into something more, Gillen and Eudocia must fight for love even as they wage war for a better future.

I will confess that I discovered this book while looking at one of your others. The cover – and I’m so weak for a pretty cover – is lovely but the setting intrigued me. I’ve never read a book set in 14th C Greece, had no idea of the history involved, was a little lost at first but the sheer joy of reading something totally new to me was delightful.

This is definitely a “learn as you go” story. Mouse, aka Girl, is a 19-ish year old woman in Thebes which is the capital of the Duchy of Athens. Lotsa political stuff has taken place and this is one of the Crusader kingdoms that is now under the harsh rule of Catalans who arrived as mercenaries and, when they weren’t paid by the Franks (seriously, if you hire mercenaries, pay them or they will make your life hell) they took over.

Mouse is an enslaved thief who has been ruthlessly trained by her master. She can become whoever Thomas tells her to be, slip in where he tells her to go, and lift what Thomas wants to sell. Mouse can scope out locations, hide her tracks, and knows from harsh experience not to cross Thomas. Sold as a child, she has no memory of life before Thomas, no experience of being loved or valued for more than what she can steal or what she would be worth in the slave markets. This will be important.

On an assignment, she is caught by a man also after what Mouse was told to get but instead of treating her harshly, Gillen is fairly reasonable thus allowing her an opportunity to escape. Their paths continue to cross for reasons I didn’t totally understand. Mouse helps Gillen, and his friend Rasheed, and when things go disastrously wrong on a mission, he ends up helping her. Soon he introduces her to a world she didn’t expect and treats her as she never thought she would be. But the political machinations they’re involved in are deadly and if either survive, they’ll need to sort out their feelings for each other.

I was a bit lost as things got started. With no references to guide me, I just hung on and kept reading and learning at the same time. Mouse’s life is not pretty but for fifteen years, she’s been housed, usually fed, taught to read, and fairly sure that as long as she does as Thomas says, she’ll be kept out of the slave market. When Gil begins to treat her as if she matters, she’s bewildered. Enslaved people don’t try to expect anything better so Mouse has never wasted time doing so.

A lot of missions are done for reasons not explained to Mouse as she’d have no say anyway so the reader is also in the dark. I was loving the “something new” which carried me along when scenes got a little repetitive and I still had no idea why they were doing what they were doing. Things finally did become clear much later into the book. The bad guys are bad and not squeamish about using torture some of which is shown on page. Mouse also has to face the horror of the slave markets and though descriptions don’t get too descriptive, things aren’t sugar coated either. There is a villain with a hard-edged grudge against her and his threats – and leers – leave nothing to the imagination as to what he’d do to her if he could.

The romance is low key and there is no sex in the book. Gil was once in peril of his life and afterwards made a pledge to remain chaste until marriage. Mouse has lived a life being formed into a tool to be used by Thomas and when the book begins, her value has kept her in his small household and free from sexual force. Mouse’s confusion as to how she feels about Gil and if she believes what she thinks he might feel for her made sense to me given her background. When their relationship conflict flares up, what each does also seems believable. I kind of suspected how things would play out but again, I could follow along and reasons were provided and valid.

This is an inspirational book. Mouse begins as a non-believer as Thomas has no use for religion. Over the course of the story, she meets Christians including a wonderful character who is the son of a Muslim father and Greek mother and who is now a Latin (Catholic)  Archbishop. When faced with some grim things, Mouse decides “what the heck” why not pray to this God. At the end of the book, she’s still in the process (but it’s looking positive) of deciding if Christianity is for her. There is one character who is described as a Muslim  but who, it is revealed later, has converted to Christianity due to found family and being disowned for something he did to protect someone weaker than himself.

Despite the slower beginning and not knowing what exactly was going on for about a third of the book, I enjoyed “Of Sword and Shadow.” There’s lots of action, tension, near misses, and an (action) ending that I didn’t know how it would be achieved. The romance is sweet but more in the background for a lot of the time. Mouse is intelligent and courageous but also has moments when she acknowledges the fear of what consequences she might face. Her reasons to doubt that Gil loves her make sense and I also applauded the fact that even though her feelings for him didn’t change, she was willing to stand up and face a future alone if need be. There is a follow up book that I will keep an eye on now that I know my way a little better around this setting. B-