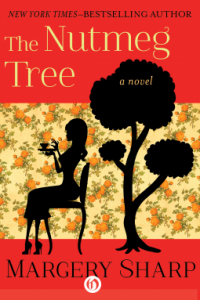 TRIGGER WARNING – One derogatory reference likening someone who is cheap to being like Jews.

Set in 1930s France, Margery Sharp’s witty, warm-hearted novel tells the story of a free-spirited mother who is reunited with her very proper daughter after sixteen years, when her daughter asks her to inspect her fiancé

Julia Packett has barely laid eyes on her daughter, Susan, since leaving her with her proper, well-heeled in-laws after her husband was killed in World War I. Now thirty-seven, her lack of prospects hasn’t dimmed her spirit or appetite for life. So when Susan asks her to come to France for the summer to persuade her grandmother to allow her to marry her fiancé, Julia sets sail with the noblest intentions of being a paragon of motherhood.

But at her mother-in-law’s vacation villa in Haute Savoie, Julia sees that her priggish but lovely daughter is completely mismatched with a man who is just like herself: a charming, clever playboy. The arrival of Susan’s legal guardian, the distinguished Sir William Waring, further complicates the situation. Soon Julia’s efforts to pass herself off as a lady and secure her daughter’s happiness spin out of control, leading to romantic entanglements and madcap adventures that challenge preconceived notions about the ultimate compatibility of any two people who fall in love.

Looking for an unconventional, older heroine? Try Julia Packett. Julia is – putting it charitably – a free spirit who doesn’t quibble about money – seeing as she usually lacks it. The War was the cause of her pregnancy then marriage – in that order – to a young, stiff necked lieutenant who duly and decently passed his recently acquired wife and unborn child on to his parents in Suffolk. Having known him for so little a period of time, it was understandable that she mourned him but little. However, the life she was leading, immured in Suffolk and far from the delights of theatre life in London, she disliked much more. Julia – still being charitable – has few maternal bones in her body though she does care for her daughter. After 18 months stuck in the sticks, she jumped at the offer by his parents to raise Susan and take a lump sum payment of £7,000. As Julia honestly acknowledges, the Packetts and Susan are too good for her and better off without her.

Now years later, she’s thrilled to receive a letter from Susan in France announcing her engagement. Determined to help her daughter, Julia hocks her possessions, buys some upscale clothes and on the boat over, while mimicking a Great Lady, reads John Galsworthy. Still she can’t help but get into a little bit of trouble all due to a darling looking high wire trapeze artist. If there’s one thing Julia knows and has a weakness for, it’s good looking men.

After her arrival, Julia realizes that her daughter is a prig – loveable but a prig. Susan is that managing type of woman who relishes doing Good Works and being Useful. For Julia, there are two types of people in the world: the unsettled who can make do and figure out how to finagle whatever that want from people and the ones like Susan and her grandparents who are the type to make and keep long term plans, who are uneasy at the idea of just picking up and totally changing. Once she meets her future son-in-law, Julia quickly knows he’s just like her and not at all suited for Susan. Now she has to be the one to try and reveal Bryan’s true nature to Susan before it’s too late. But in doing so, will Julia lose Susan’s budding affection since she risks Susan discovering Julia’s own true nature?

I find I like Julia just as she is. She loves pleasure and loves to give happiness. She’s basically content with herself and knows her faults as well as anyone. She accepts herself, well at least when not trying to impress Susan or Sir William. She wants to be good for Susan but, oh Lord it’s hard when there’s joy to be had and shared and Julia needs to replenish her funds.

It might seem like little is going on but this is a very character driven book with most of the cast doing some serious introspection amid the subtle humor. They’re soul searching, learning or finally acknowledging truths about themselves. One type of person isn’t better than the other. We need both types to make the world go around. There is a great deal of early 20th century slang I had fun figuring out.

The characters are often contrasts and compared to each other: young, determined Susan v older and wiser and more forgiving Julia, Julia and Bryan who are both easygoing and charming, madcap Julia v slightly staid Sir William who adores how she is and is wise enough to talk her into marriage. He knows who will make him happy and he’s not about to give that up.

The ending for one couple might seem abrupt but I think enough has been said about their characters and outlooks on life to easily guess how things will go between them. Plus the book is really more about Julia who has found a man who sees and loves her as she is. She won’t need to pose or dissemble or pretend to be anyone other than she is. B-