REVIEW: Not Safe For Work by Charlotte Stein

From the Jacket Copy:“Employees must maintain clear boundaries between personal and professional relationships and conduct themselves in a manner appropriate to the office…”

When Hartford brings in Abel Hernandez as the new CEO for his company Hartford Industries, he’s prepared for Abel to shake things up…but not quite like this and certainly not with his personal assistant Amy, the one woman he’s always wanted but never taken. He sees them breaking all of his precious rules, and he intends to reprimand them for it. The only problem is, it isn’t anger he feels towards his two most trusted employees…it’s possession. It’s desire.

The data at Goodreads says that this is 69 pages which is funny because the novella has a ton of sex in it. I am going to open up this review stating that Charlotte Stein sends me her releases when they are finished. I am not a beta reader, just a really annoying fangirl. This ménage has the Stein meet-awkward moment. Specifically, Amy and Abel, the first part of the f/m in the menage equation, meet over the awkward circumstance of a weekend tour of the office. The two are very much in lust and delight over breaking the office rules set by well-known tyrant/billionaire, Tom Hartford. 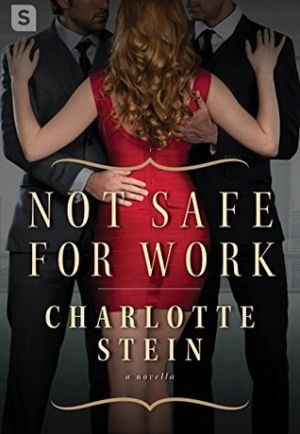 Amy and Abel are caught on camera and the dynamics of the f/m/m relationship go from there. Like I mentioned earlier, there is a wonderful awkwardness to Stein’s characters that is extremely sincere. However, the characterization falls mainly to the wayside in favor of a mountain of sex. Compared to Stein’s other menage books, I don’t think this is as strong because it lacks the distinct character building found in her other works. For example, in her new adult menage story, Doubled, heroine Bobbi and the Hoffmann twins engage in a little more normalcy before jumping into the sexual relationship. I also appreciate that in Doubled, the heroine connects each twin with her perception of their approach towards sex as well as how those theories are proven unfounded.

If you look at Stein’s  Power Play or Control, each menage features a brash, cocky third partner who enters the established couple for sexual encounters and pushes the heroine as well as other hero into even more “taboo” acts. Not Safe For Work takes the opposite approach where the would be dominant partner in this case, Hartford, is actually the one who becomes the most undone. I did like that for how short the novella was Abel and Amy were able to get to the “I love yous” fairly quickly. How Hartford reaches that conclusion would be spoiling the biggest part of the novella, suffice to say it’ll turn your head. For me, this doesn’t stand up as well against what I feel are Stein’s more rounded and character rich menages. However, if you’re looking for a quick sexy read with a heck of a twist ending (there is an HEA), try Not Safe for Work.