REVIEW: Not a Drop to Drink by Mindy McGinnis

A few months ago I mentioned a personal need to take a break from the YA dystopia subgenre. The books weren’t working for me, and I was growing increasingly frustrated. Then I heard the premise for your debut novel: a world in which fresh water became a scarce, much sought after resource. I found this idea far easier to believe than some other dystopian concepts I’ve read. 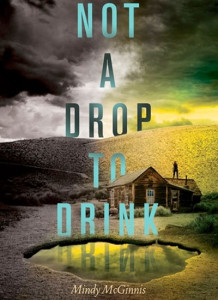 Lynn’s existence is one of desperate survival: purifying drinking water, fending off coyotes, finding enough food to last the winter, and protecting their pond against strangers who’d want to steal their precious water. It’s a hard life but it’s the only one she’s ever known. She’s used to it and wants nothing more than to remain in the family home with her mother. Lynn doesn’t need anyone else.

When her mother is killed by coyotes, Lynn must now fend for herself. Not only does she have hungry coyotes to deal with but she also has to protect her home from scavengers who’d love nothing more than to steal it from her. But when she encounters strangers camping out by the stream near her home, Lynn learns what it means to trust and love another human being. Now she has to protect them too while the scavengers she’s been fending off growing in strength and number.

Given how many dystopian and post-apocalyptic novels there are, it’s hard to be original and this book isn’t. But a lack of originality is fine, provided the characters are interesting and the story are interesting. For me, Not a Drop to Drink delivered on both fronts.

I liked Lynn a lot. She’s a hard heroine, raised to be fierce and independent, by a mother who became a hard woman in order to survive in a world that was falling apart. Some readers will find her unlikeable. I thought her characterization was great. Given her upbringing, it made sense that Lynn didn’t trust anyone. She was taught to shoot first and forget about asking the questions later because the person you shot at better be dead.

I also thought Lynn’s innocence about certain topics made sense. She didn’t grow up around men so why would she know anything about them? That said, this ignorance wasn’t played for laughs. Lynn wasn’t a wide-eyed naive girl. Sex, love, and flirting were foreign concepts to her. There was the usual instalove romance subplot but it was more low-level than in other books in this genre, which I appreciated. So if you’re a reader who prefers much prevalent romance in your YA, this is not the book for you. That and the romance doesn’t end well.

Regarding Lynn’s ignorance about certain topics, I’m of two minds about the handling of rape. At a point in the novel, it’s necessary to explain to Lynn what rape is and it didn’t sit well with me that rape was equated to sex. Rape has more to do with power rather than with sex, and the narrative didn’t make that distinction clear in my opinion. On the other hand, Lynn received this explanation from a male neighbor and perhaps that is how he viewed rape and that’s why he explained it to Lynn that way. The lacking distinction is murky, so I’m not entirely sure if it was deliberate.

One of the reasons I liked this book is because despite an obvious dystopian premise, it reads more like a post-apocalyptic survival adventure. I miss those kinds of stories and even if there is a rather useless love interest, the narrative remains focused on Lynn and her growth as a person. The story makes it clear that it’s perfectly all right to be a hard person, sometimes the circumstances require it in order to survive, but that it was okay to have some soft edges too. That it was okay to trust people.

The ultimate confrontation at the end could have used more build-up. I thought that the initial threat was set up nicely in the beginning when both Lynn and her mother were shooting at the scavengers in the dark. But once Lynn made contact with her neighbor and then befriended the people by the river, that thread dropped, only to be picked up at the end. It almost read like an afterthought: Oops! The book is ending! We need an exciting climax!

I also thought the identity of the antagonist was predictable and cliche. That said, I did think Lynn’s choice was the correct one. Blood doesn’t trump everything.

While not an original story, I thought Not a Drop to Drink was a worthwhile read. People tired of introspective dystopias might find this more to their liking. The constant spectre of rape might be a turn-off, as well as the way it was handled, however. And romance readers definitely need to mind what I said about that subplot. B-