REVIEW: No One Wants to Be Miss Havisham by Brigid Coady 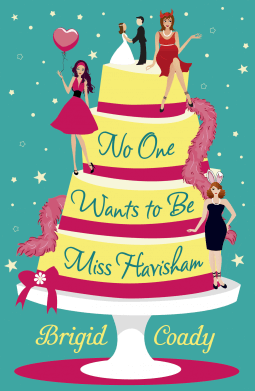 What the Dickens is going on?

Edie Dickens is a shark of a divorce lawyer. She doesn’t believe in love and she scoffs at happily ever afters, however she’s agreed to be maid of honour for her oldest friend, Mel in two weeks and she still has the hen night to endure. But she has even more to endure when she’s visited by Jessica Marley’s ghost and finds out she must change her ways or end up being damned to an eternity watching other people’s happiness. Edie is visited by the Ghosts of Weddings Past, Present and Future, every Friday night until the day of the wedding. Can she learn from her mistakes in time? And did the ghosts send the hunky new lawyer, Jack Twist, to distract her?

I am not a connoisseur of Charles Dickens. Honestly the only book of his I’ve ever read is “Tale of Two Cities.” But I’ve seen adaptations of and read enough about “A Christmas Carol” and heard of the character of Miss Havisham that the blurb interested me. Plus I find myself drawn to homages and take-offs of classic literature so I clicked on the netgalley request button and here we are.

After a quick scan of the synopsis of “Great Expectations” I was off. Despite the title, the story turned out to be mainly from “A Christmas Carol” but with a sprinkling of characters from other Dickens books. Though not first person, it’s told from only Edie’s POV and is loaded with British style cutting humor. I probably missed a lot of Dickens references but what the heck, I think I got the main ones.

So how did she become the Scrooge like character? Edie has lots of examples in front of her of failed marriages. As a divorce lawyer, she knows how things come unglued and as the daughter of divorced parents, she’s lived it. Marriage = eventual pain – that’s how Edie views the institution. Yes, Edie can be a difficult person to know and to love or, let’s be honest, like. But she has long standing reasons for hiding her real self behind walls and for acting as she has.

Edie’s really got some control issues courtesy of her mother’s actions which were courtesy of a few of her mother’s issues. Yeah, blame it on the mother but that’s how this one rolls. Still, Edie comes by her issues legitimately. Being icy and in charge has protected her from hurts but also kept her from emotionally interacting with others for so much of her life. She’s discovering that thawing her heart is painful and takes a while. Letting down her constant guard isn’t easy, especially as she’s hardly aware of her guard anymore. Rejection hurts.

Edie is not an easy person for the other characters to like but she’s presented so that I’m interested in her and how she’s going to cope with all the things in her life. I still like her. She’s got emotions and emotional fragility but has had it drummed into her in various ways to never let this show as it can be used against her.

I’m trying to figure out why Jack kept sticking around her beyond the fact that Edie needed a romance hero. At first, okay, he’s attracted to her but after that time he’d publicly called her – to a friend – an ice queen bitch and their interactions hadn’t exactly been warm and fuzzy despite Edie’s daydreams and wandering thoughts in the Tube. Without his POV, his continued attraction to her is all a dark mystery predicated on the little peeps that he occasionally gets of Edie behind her mask.

The Ghostly visitations are a mix of hilarious and heartbreak. Modern Edie tries to rationalize the first one as a bad dream brought on by overwork and the prospect of all the “to do” surrounding Mel’s wedding. By the time the Ghost of Weddings Present arrives, Edie is beginning to believe. She’s also shocked by the “gut punch” of an evening listening to the views about her from people Edie thought were friends. Edie shifts into gear to try and salvage her eternity and maybe avoid spending that time dragging a heavy, glitter chain behind her that’s straight from a British hen night. But it’s the final visitation from The Ghost of Weddings to Come that spurs Edie to new heights of reform and changes her view of these hauntings to being for her own good.

Miss Havisham actually turns out to be Edie’s mother and is more than a lonely – in this case – divorcee. She’s someone who got hurt and sought to spread that hurt to others to ease her own pain. The one who grew to mistrust and distrust love and marriage and keep others from it. Edie has to turn away from that example and let hope and the possibility of love begin to grow in her heart again.

I’m not sure I like the fact that Edie and her solicitor mentor, Hilary Satis, are being blamed for all the marital woe in England. Perhaps a touch much, yeah? Perhaps too many shark references? Okay maybe the abundance of woe and doom isn’t totally due to Edie’s success as a solicitor and more to her personal distaste of marriage but seeing a woman browbeaten as the cause of everything from friends’ marriages never starting or others ending in divorce as well as being the cause of the extinction of the mammoths is a bit much.

On the other hand, the modernization and send up of “A Christmas Carol” is funny and smart. Yes, I’m conflicted on how much I enjoyed it.

What ultimately kept me invested with the story is that Edie isn’t so much changed as she removes the masks she’s put in place to prevent herself getting hurt. The real Edie is allowed to shine out, take the risk of rejection, of hurt but also the chance for love. Like the Grinch, her tender heart, already a bit bruised from learning how people see her and think of her, grows. Edie’s smart enough to know it’s going to take time to convince people of her newly revealed self.

She’s had to face some hard truths about herself and the person she drifted into and decided to emulate in order to stuff all her hurt inside. Eavesdroppers seldom hear good things about themselves and that is certainly the reality here. But Edie is ready to be the person she could – maybe should – have been. Then the Ghost of Weddings Present sticks a foot into the scrum for Mel’s bridal bouquet and Edie just might be off and running towards her future.

So the book makes me feel lighter and happier. And even if Edie sometimes has too many shark and Ice Bitch comments made about her, well she is frozen – frozen in fear of pain and probably most of us have had those moments. The good thing is that even when she’s at her lowest, she’s still got agency. The hen night gets a mite embarrassing but that’s the point. Edie isn’t humiliated any more than anyone else unlike many romance books I’ve read where this happens. She grows, she learns, she sees for herself and decides she needs and wants to change. In the end, it’s her choice. B-