Sometimes authors and readers have some kind of strange sychronicity where everything that author writes hits all the buttons of the reader and everyone else on the outside looks on in befuddled wonderment.  Objectively I can see that there are things that don’t work very well in this book. There is the excessive use of the unsexy word vagina.  It is often clenching.  There is the ever constant reminder that the previous couples in this Protector series are blissed out on happiness as if they are mainlining pixie dust every morning. There is the fact that monetarily everyone in this book is so rich and so talented and so beautiful that I was momentarily blinded by the bright shining light emitting from the ARC.  But my response is to run around with my fingers in my ears and repeating “la la la la I can’t hear you.” 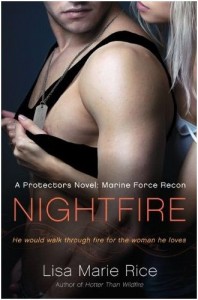 I received an arc of this book and gobbled it down the same night.  And the truth is, those issues aside, there is some great stuff going on in this book. Like the hero acknowledging being a manslut is actual NOT a thing of honor.  How many times is the manslut held up like some diety because he’s slept around so much that his dick has logged more miles the transatlantic frequent flyer?

Like scenes that are filled with real tension and suspense and enough armory that they could have been ripped from a Michael Bay movie.  And that’s a good thing because there is nothing worse than an action scene that is limper than a overripe head of lettuce laid out in the sun for three days.

Like the heroine being bad at everything from cooking to singing to keeping a house but being awesome in her own right in direct contrast to the previous two heroines (one of whom is amazing translator and so beautiful angels sing and the other who is an amazing singer and an amazing bookkeeper).

Mike Keillor is a manslut. He goes out to those bars where women go specifically for one night stands.   Even his friends refer to him as ” Mike, the man-slut. Mike, the man who’d nail anything that moved.”  This is recognized by everyone as a character flaw, something which results from Mike being broken.  While being a manslut doesn’t always arise from wanting to erase some terrible past, I really appreciated this type of portrayal which is unusual in the genre which generally elevates the man whores.

Mike’s most recent pick up is a mistake and in the midst of coitus, Mike realizes this. He is screwing a cokehead who wants him, no begs him, to beat the crap out of her.  His erection deflates and he can’t get out of the random apartment afterward.  A day later, he meets what will be the love of his life, Chloe.  All his mania subsides when he is near Chloe. Oh, except for his penis.

She rested against him and he wanted to keep her there forever, but when he felt himself harden, he moved away subtly, mentally rolling his eyes.

Goddamn. His dick had never known how to behave itself.

Oh man, way to turn this moment into something that belonged in the dives he frequented when he got his black moments.

He couldn’t really blame his dick, though. His dick was right to move. He felt it wasn’t getting erect so much as trying to get closer to her, close to all that silk and gold.

Chloe has a special connection to Mike’s foster brother, Harry, and because of that Harry exerts pressure on Mike to not sully Chloe with his brokenness.  I was a little surprised that Harry acted in this fashion because Harry himself had been broken but I also liked it because I felt like it added some grittiness to what had been a fairly sweet, maybe even saccharine, beginnning.  Even though Mike, Harry and Sam were close as brothers, Harry wasn’t going to stand with Mike, not this time.  I wasn’t sure whether Mike deserved it and thus the ambiguity of the situation added spice.

Right now he was sending her to his room without even a hug. And why? Because he was a coward.The whole hurting her thing was true but was also bullshit of the highest order.

He didn’t flail around while fucking. He didn’t bite or twist limbs. He could control himself enough not to physically hurt her. That was all a line of crap.

The truth was he was scared shitless. There was nothing here he even remotely recognized as familiar, except his hard-on. And even that felt somehow different. It wasn’t a normal hard-on, the kind he had when an available woman was around. No, it was a Chloe woodie, through and through. Impossible to deal with, impossible to get rid of.

Chloe Mason hadn’t had a great upbringing, something she lays out in great detail in chapter two of the book.  Abandoned and then adopted, raised by indifferent parents, then nearly raped by her adopted father, sent off to boarding school, and left alone in the world when her parents died, she comes to Mike Keillor’s business seeking out a connection.  When the connection is affirmed, Chloe finds herself drawn into the cocoon of protectiveness that is the RBK family – Mike, his brothers, their wives, and their daughters.

When Chloe inadvertently places the Russian mafia on her tail, Mike does everything he can to protect her, and this serves as the catalyst to finally bring them together.

The tension in the story is primarily external but much of the emotional drama comes from Mike’s point of view, particularly his own feelings of worth and sex.  Chloe’s position in the book is more static and less dramatic but that has often been true in LMR books.  And frankly, I read these books for the portrayal of the guys.  It’s not that the women are doormats and uninteresting but through the lens of the awestruck male, these women are perfect. What you are selling here, though, isn’t that the women are perfect but for this one man, this one woman is divine.  For Mike, Chloe is everything good and right in the world and luckily for him, the feeling is reciprocated.  The emotions of the characters are writ large.  Every feeling is the most heightened feeling. Every orgasm the most amazing ever felt.

Every sense she had was heightened, her entire body turning into one huge receptor. Absolutely every sensation her body was receiving was delectable, particularly the desire.

Oh my. She’d read about it, endlessly. Listened to friends talk about it, thought about it, but never understood it.

The entire book is written in this fashion such that while you are immersed within the story it all makes perfect sense.  Stepping back, it seems over the top, extreme, and flawed but inside the story, inside the world with Chloe and Mike and its oversized, exaggerated fun house mirrors?  It’s just right.  Grading this book is like an exercise in futility for me. I think from a technical aspect it is likely a C to a C+.  There were pacing problems, particularly at the beginning.  It seemed like it took 100 pages to get to any real conflict.  There was the love that blossomed, nearly knocking me off my metaphorical reading feet in its immediacy.   I wished I had seen more development of Chloe.  She was surprisingly well adjusted for all of her past traumas and her emotional movement could have been played up for greater conflict.  But I gobbled this book up like it was the first thing I had to eat after a four day fast.  We’ll compromise at the B-.